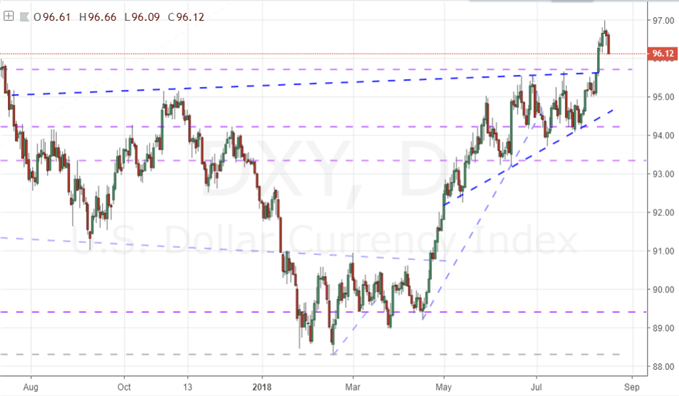 It took nearly a year for the Dollar to carve out a massive inverse head-and-shoulders pattern through 2017 and 2018. On Friday, August 10, the ‘neckline’ break was made amid a sudden surge in volatility across the financial system. A notable risk aversion swept through most risk-leaning assets, but the specific intensity for the emerging market currencies made for an ideal Dollar conduit. It wasn’t that the collective tumble from the Russian Ruble, Turkish Lira, South African Rand, Indian Rupee and other high profile EM currencies served as the springboard for the world’s most prominent reserve currency. Rather, the outflow of capital from that riskier segment served to prompt a brief ‘financial contagion’ fear which would help to better leverage the absolute safe haven status that the Greenback represents.

By the end of the week, the momentum behind the risk aversion drive ebbed with equities and EM currencies finding a hearty bounce. Recent history has shown us that the same winds that lift the US equity indices like the S&P 500 back towards record highs have in turn supported the higher-yield Dollar to further gains of its own. Technically speaking, it should have been easier for the currency to catch a bid as it was already on the action side of the large inverse head-and-shoulders neckline break and mid-point of the 2001 to 2008 bear range around 95.65 on the DXY Index. Yet, that correlation seems to have diminished for the time being.

As is often the case in the progression of technicals, former resistance will now be observed for its quality as new support for the Dollar. The sheer scale of this pattern will serve to make it far more definitive to traders whether it hold for a bounce and continuation or break to threaten the volatile bull trend. There is little to glean from traditional indicators like the MACD (which has yet to cross), the RSI (coming off a brief overbought signal at the middle of the week) or the ATR (the 20-day continues to deflate as a measure of activity). Open interest is perhaps far more important to the equation moving forward. Despite the volatility of the past week, market conditions are still thin – as is common for the ‘Summer Doldrums’. If the speculative anxiety fades, it would be just as difficult to forge meaningful follow through on August’s remarkable bullish pattern break as registering yet another key break dropping back below the same 95.65 figure. Range between that new floor and the 97 high set last week is the path of least resistance. Yet, if there is a bid for progress, a bearish break would pose the more potent development as it would move against prevailing momentum. 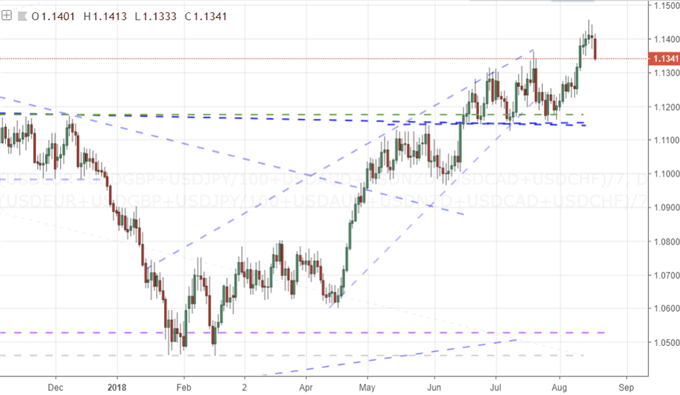 When evaluating the Dollar it is important to assess the currency’s bearings outside the often overwhelming influence of EURUSD. The ICE’s DXY Index is a good representation of the Greenback, but it is also trade weighted and therefore heavily skewed towards EURUSD. In the past months, we have seen the benchmark pair deviate somewhat relative to other Dollar-based majors which can produce false technical signals for the rest of the market and/or slow signals of meaningful breaks. Above is the daily chart of an equally-weighted Dollar index which deemphasizes the importance of July’s highs – which are key reinforcement of the ‘neckline’ for the DXY. This technical picture may suggest that the Greenback can slide back through its near-term support (the ‘neckline’ on the DXY and EURUSD) and yet it not signal a full-fledged bear trend. Perhaps the most important quality of our markets to determine direction and ability to forge progress is liquidity. Watch volume and open interest levels throughout the financial system (as they aren’t readily available in spot FX).