Join our analysts for insights, trading advice and live coverage of all major economic data at the DailyFX Webinars

The Japanese Yen was hammered by a generally-stronger US Dollar this week. Indeed, it has been on the receiving end of notable punishment.

Fundamentally speaking this is no surprise. Powered by a combination of worries about inflation, and interest-rate rises, US ten-year Treasury yields have hit 3% for the first time in more than four years. By contrast, Japan’s equivalents yield a miserly 0.05%- as a direct result of ongoing yield-curve repression by the Bank of Japan. Small wonder then that the yield differential now yawning should burnish the US Dollar’s charms at the expense of the Yen’s.

Technically speaking USD/JPY has left its old trading range far behind in the last couple of days. In place since early April it was broken on Monday when the Dollar broke up through JPY107.78. 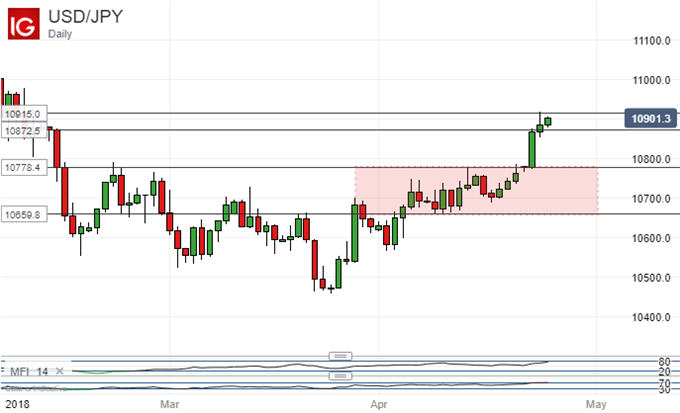 Bulls now appear to be taking aim at the 109.30 region which was February 9’s intraday top. If they can beat that on a daily-closing basis (and they haven’t yet) then February 2’s peak of 109.52 will beckon as the next probable upside target. That will probably look more compelling and sustainable following a period of consolidation, however.

Near-term support levels are difficult to spot with any conviction right now given the rapid nature of USD/JPY’s gains. However, the upper limit of that old trading range looks likely. It comes in at 107.78, quite a way below the market.

The Euro has also been gaining against the Japanese currency, with the market still rigorously respecting an uptrend channel, which has bounded the action since late March.

Be aware, however, that the channel’s resistance uptrend may be a little spurious. After all, it has only been tested once and that test came quite early in the channel’s existence. A more truthful and tradeable picture may be gleaned from viewing this, newer uptrend range, which seems to have been more faithfully adhered to, both to the upside and the down.

It suggests that current support lies around JPY132.31, with resistance at JPY134.08.