Join our analysts live for coverage of all the major data which affect Japanese Yen trade at the DailyFX Webinars.

The Japanese Yen’s long climb against the US Dollar was arrested at the start of this month, and the hiatus endures.

Having fallen in a well-respected downtrend channel since January 8, USD/JPY bottomed out at the start of this month since when it has traded a broad range between support at 105.27 and resistance at 107.24. 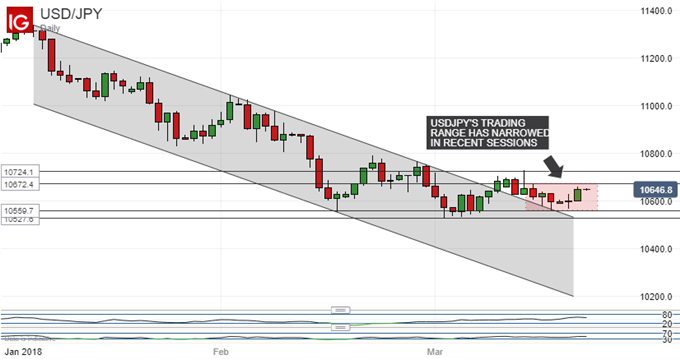 With that in mind it might now be best to watch for daily closes in relation to this new, narrower sub-band which sits between 106.72 to the upside and 105.59 to the down. A finish outside those bounds might give us some idea as to which limit of the broader range might be tested next.

It’s probably also worth pointing out that the former upper limit of that downtrend channel which was broken to the upside in January is now providing the pair with quite notable support. It has been respected as such almost to the tick since March 9. 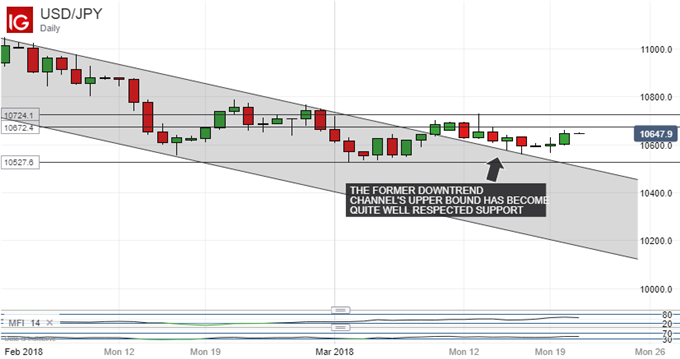 Support from this quarter comes in at 105.26 as of Wednesday and it will be interesting to see if this continues to hold when tested. At present there certainly seems to be a degree of resolve that that downtrend at least will not resume, even if by the same token there’s no obvious stored impetus for a big upside push.

Meanwhile the beleaguered Australian Dollar looks much more mired against its Japanese rival. AUD/JPY remains stuck in the downward channel which has endured since February 5 and which is itself an acceleration of the cross’s falls from the highs of January.

The Aussie did manage quite a strong upside break earlier this month, which took it above a downtrend which had been in place since February 8. However, that break was conclusively thwarted by last week’s steep falls.

AUD/JPY has already had a little intraday foray below the previous significant low March 5’s 81.52. It slipped below that on Monday, only to retrace its steps a little. Keep an eye on that level. It’s hard to avoids the conclusion that a daily close below it must presage much more significant falls.