Join our analysts live for all the key economic data which move the Japanese Yen at the DailyFX Webinars. We’d love to have you along.

The Japanese Yen hasn’t moved much against the US Dollar since I took my last technical look at it a week ago, but that doesn’t mean there’s nothing going on. Far from it.

Yes, USD/JPY seems to have settled into a range which has been respected long enough to make it worth playing. Previously the Yen had been in the ascendant against the greenback since USD/JPY printed highs in the 114.75 area back in November 2017. That long slide was arrested in mid-February since when the pair has occupied a broad range between March 2’s low of 105.20 and February 22’s peak of 107.88. 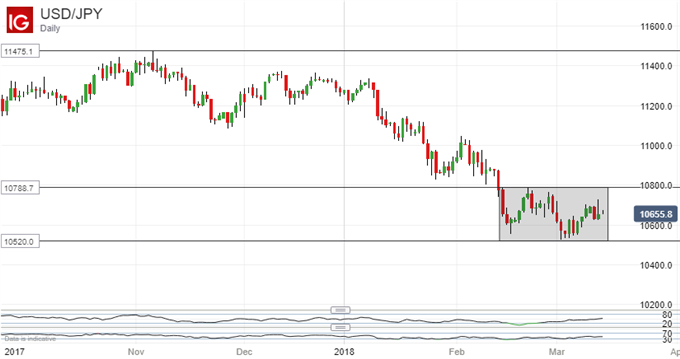 This broad range is probably still all traders have to play with, as there is no sign whatever that it’s likely to break in the near future. The pair looks neither overbought nor oversold and current levels. Its moving averages are in the chronological order which suggests that we’re some way from any important turn.

However, it is perhaps notable that neither that range top or bottom has been in play in recent weeks. Indeed, a newer, narrower range seems palpable within that broader, older one. It has also been more obviously respected since the start of March. It comes in between 107.03 to the upside and 105.02 to the down. That range encompasses almost all trading activity since March 2, and all of it on a daily-close basis. 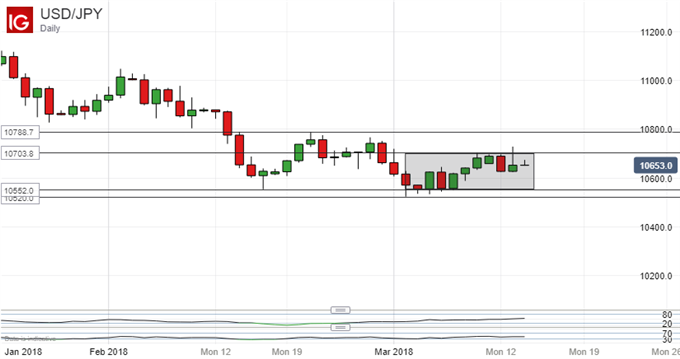 Keep an eye on it. A conclusive break either way will probably be a good indication of which part of the broader range will face trial first.

The New Zealand Dollar meanwhile has carved out a more convincing uptrend against the Japanese currency since bottoming out at the lows of March 6. The currency has risen against a generally weaker Yen, but to do so convincingly it will need to take out resistance at 78.30 on a daily close. It has come tantalizingly near but has yet to do the trick. That level was the intraday of February 26, and is in focus because it was the last significant peak before the cross took a leg lower. Above that, February 21’s intraday top of 79.33 will bar the way higher.

Whether you’re new to trading or an old hand DailyFX has plenty of resources to help you. There’s our trading sentiment indicator which shows you live how IG clients are positioned right now. We also hold educational webinars and offer trading guides, with one specifically aimed at those new to foreign exchange markets. There’s also a Bitcoin guide. Be sure to make the most of them all. They were written by our seasoned trading experts and they’re all free.