The Japanese Yen continues to strengthen against the US Dollar, with a well-respected downtrend channel from early still very much in force.

USD/JPY has now fallen to levels not seen since late 2016 before Dollar’s ‘Trump trade’ bounce, which came as markets got used to the shock election of the current US President. Moreover, there are few obvious signs that a turnaround is in sight. 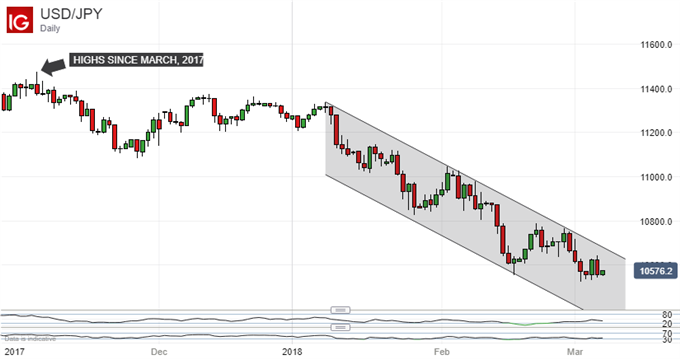 Last week I raised the possibility that a pennant pattern had formed on the daily chart which would see a resumption of the dominant downtrend once it played out. This seems to have happened but so far not to a very marked extent. The pair is certainly lower now that it was then, but it seems to be making a moderate attempt to base around the 105.40 area which has held for the past four days or so. As you can see from the chart below this area is closer to the channel’s top than it is to its base. 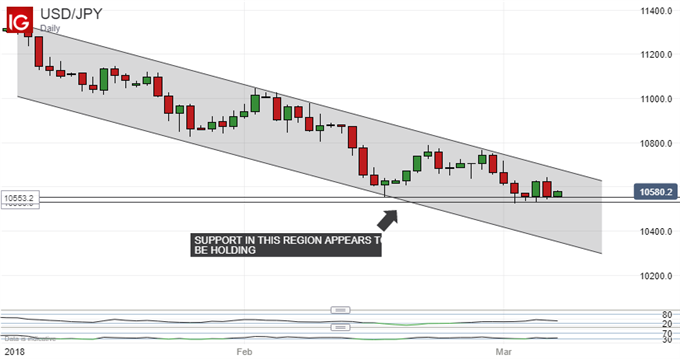 Should these levels continue to hold then US Dollar bulls might fancy the chances of a foray towards than channel top. However, that’s still almost a full Yen above current levels and it’s hard to see where that sort of momentum will come from on current showing. There’s also likely to be a degree of fundamental caution this week thanks to the wait for Friday when official US payroll data will be released.

This remains arguably the most important single release of the global economic calendar and it’s reasonable to expect muted trade before it hits. If the current USD/JPY base survives that data and the end of the week intact, then it might be an idea to play for a little more upside. However, this will require discipline and tight stop-loss levels as there is very little to suggest that the over-arching, long-term downtrend is under serious threat.

The Australian Dollar finds itself in a very similar position against the Japanese currency to that of the US Dollar. AUD/JPY remains dominated by an analogous, entrenched downtrend from its most recent significant highs. It has also staged a similar bounce which, although it doesn’t look especially significant, has yet to be conclusively rejected either.

Indeed, AUD/JPY has managed to rise back a little further than USD/JPY in recent days, which makes sense as it had become a lot more oversold according to its own Relative Strength Index. With that in mind the current, 100-tick or so range might be worth playing.

However, another pennant formation could be in play on this daily chart as well.

It doesn’t have quite as much confirmation in terms of its lower, uptrend boundary as purists would probably like, but it still counts for all that.

So trade that modest range by all means if you must but be aware that another leg lower still looks like the most likely path.

Whether you’re new to trading or well-seasoned, DailyFX offers resources to help you. There’s our trading sentiment indicator which shows you live how IG clients are positioned in real time. We also hold educational and analytical webinars and offer trading guides, with one specifically aimed at those new to foreign exchange markets. There’s also a Bitcoin guide. Be sure to make the most of them all. They were written by our seasoned trading experts and they’re all free.