What does the retail foreign exchange community make of the Japanese Yen’s chances right now? Find out at the DailyFX Sentiment Page

The Japanese Yen remains strong against a generally struggling US Dollar despite commentary from the Bank of Japan this week affirming that its current, ultra-loose monetary settings are not going anywhere.

At the time of writing (02:35 GMT Wednesday) USD/JPY has just probed below 110.00 for the first time since late September last year. 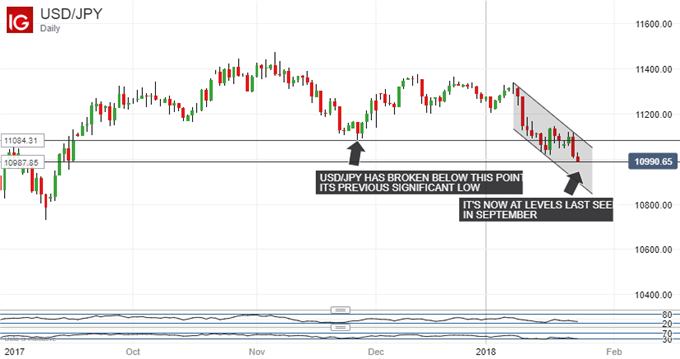 The pair has now broken significantly below the previous recent low, which was November 27’s 110.84. As a result, the next couple of day’s closing levels could be very significant in terms of likely short-term direction.

USD/JPY has broken below the lower boundary of a tentative trading range which had formed over the past week or so between January 12’s intraday high of 111.68 and the 17’s low of 110.94. Obviously the pair remains in the steep downtrend channel from the highs of January 8 and, if it closes below that range base then a downside test of the channel’s lower bound must become more likely. 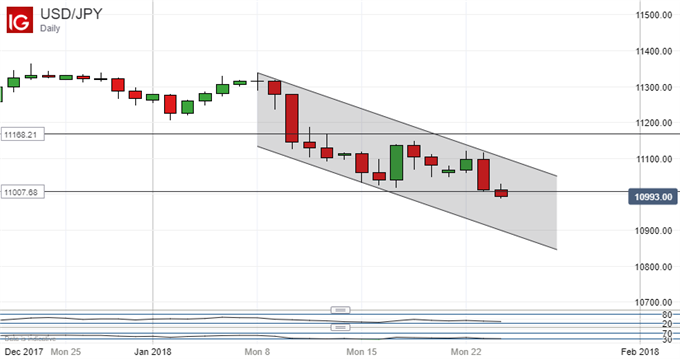 At present that comes in at 108.95. Should that in turn give way then the entirety of the climb up from September 8’s low of 107.30 will come under immediate threat.

US Dollar weakness has seen the UK Pound Sterling rise to its highest levels against the greenback since the Brexit referendum of mid-2016 and the long accompanying swallow dive which that inflicted on the British currency. Some of that strength has been reflected in the GBP/JPY cross which is also enjoying the view from heights not seen since that shock vote.

Sterling’s strength seems to be a continuation of the quite strong uptrend channel which has been in place since the lows of August, 2017. 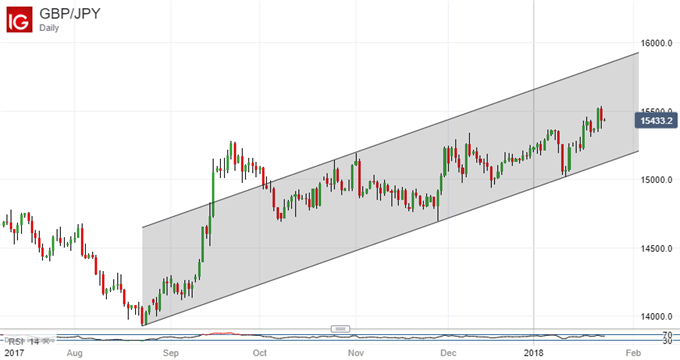 The highs chalked up between late September and early October of that year look slightly spurious from the point of view of this channel, but it offers enough up and down-side validation elsewhere to render it appropriate despite them.

Right now GBP/JPY is about right in the middle of the channel, as you can see, with neither the momentum indicators or the moving averages suggesting any great discomfort at these levels. However, the last couple of weeks’ uptrend has been steep and a pause for breath may now be in order. Near-term retracement levels to conjure with could be the initial, 23,6% Fibonacci retracement of the climb. That would come in at 154.16. The second, 38.2% retracement lurks at 153.40. 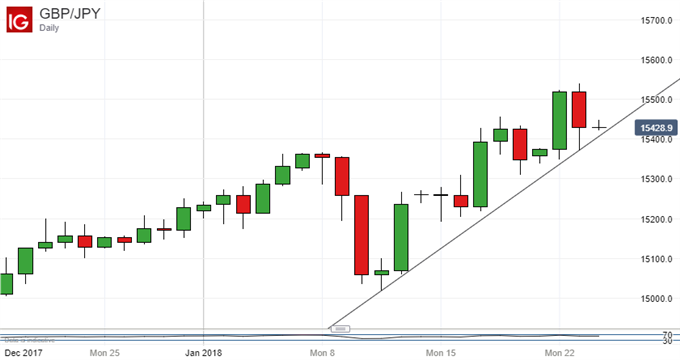