Need help building confidence in your USD/JPY trading strategy? Check out our guide!

The Japanese Yen retains the upper hand over the US Dollar but some of the latter’s strength may be returning.

USD/JPY has been stuck in a clear downtrend since it peaked at 114.74 at the start of November. Fundamentally speaking some EUR/USD weakness in the face of stronger European economic numbers didn’t help the greenback’s broader cause. Neither did Federal Reserve commentary seemingly less certain about domestic inflation and so, by inference, about the necessity for multiple interest rate rises next year.

However, the pair does seem to be building some sort of short-term base in the 110.86 area which has been the limit of bearish ambition since last week. Of course, there have already been distinct periods of consolidation within this down-channel and none of them stopped the ensuing lurch lower. This one is looking a little more solid than its predecessors though. It will be interesting to see whether Dollar bulls can force a test of the upward boundary. Admittedly that comes in quite a long way above the market Wednesday, at 112.14. 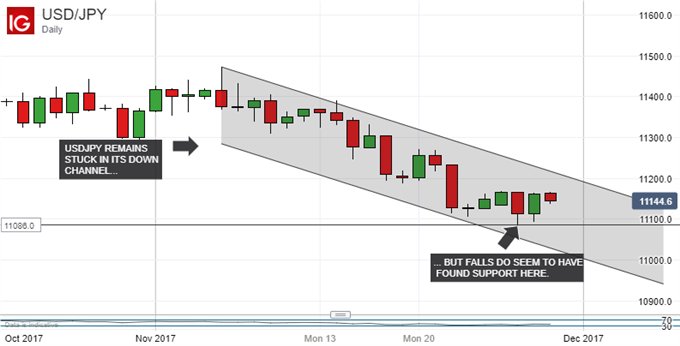 But if the bulls can hold their nerve for the rest of this week then we could see an upside test a lot closer to current levels. Progress or the lack of it here will be something to watch this week and possibly into next.

It’s perhaps also telling that USDJPY seems to have bounced at the 50% Fibonacci retracement of the climb up from September 10’s lows. Further slides will bring the entirety of that rise into obvious question, so the bulls clearly have a job on their hands to keep trade above this level. 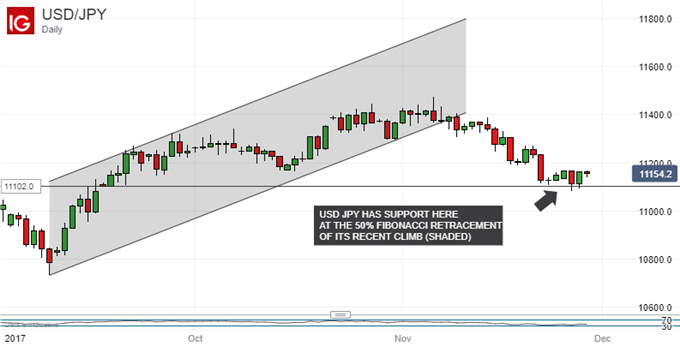 Meanwhile that bullish Euro is holding its own rather better against the Japanese currency. Indeed EUR/JPY remains quite close to 2017’s peak, which was the 134.48 level hit on October 27. However, while the cross has held up quite well, impetus to push on much higher also seems to be lacking. The Euro has hovered somewhere around current levels since the end of September. 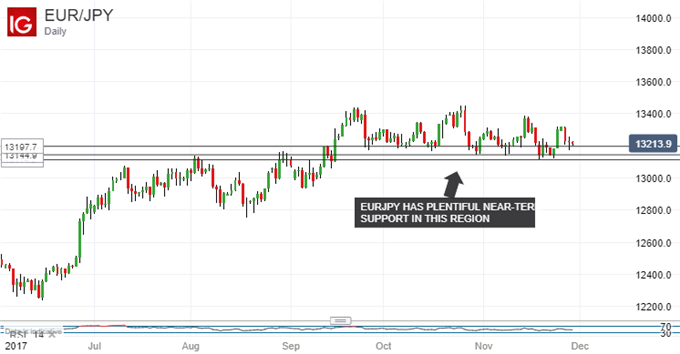 We could of course be seeing a period of thoughtful consolidation as prelude to another upward push. But, if we are, it’s quite hard to see what the bulls might be waiting for. There are plenty of near-term support levels just beneath the market, though. As long as those hold so too, probably, does the consolidation thesis. They bear close watching though. Last week saw a slip into a lower trading range. The damage seems to have been made good, but a weekly close around current levels or higher would be reassuring.