Get trading tips, actionable looks-ahead and trade the major economic data live and interactive at the DailyFX webinars

The Japanese Yen has reached an interesting juncture against the US Dollar, with USD/JPY weakness apparently fading out at a key point.

This week’s bounce in the 111.69 area wasn’t obviously significant at the time. But with hindsight it seems to suggest that the uptrend channel from September 8 remains valid, even if it is now facing a sterner downside test than at any time since it started to form. Moreover, that bounce kept USD/JPY above the extremely persistent downtrend line which has been in place for much of this year. 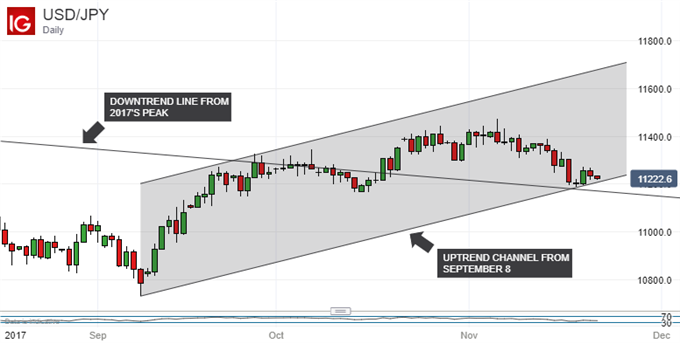 The solid fundamental reasons behind the Yen’s recent weakness are clear enough. Investors are pretty sure that US interest rates will rise once more in December, with more increases to come in the new year should the economics allow. Japan by contrast remains committed to what Bank of Japan Governor Haruhiko Kuroda calls “powerful monetary easing” unless and until inflation rises. Various media reports this week have suggested that the Japanese authorities may be having some second thoughts about this, and that easing could be scaled back sooner than markets now expect. But for now Kurdoa’s remains the official line.

That being so it’s hardly surprising that USD/JPY should gain. However, the technical picture looks a bit murkier than the bald fundamentals might suggest.

USD/JPY has made a clear “shoulder” formation, and added what could be the “head.” If it completes a head and shoulders pattern then that could be very bad news for the bulls, presaging a possible reversion of all recent gains.

At present the jury must be considered out. USD/JPY remains above the putative pattern “neckline” which comes in at 111.68. Watch that level very closely though. If the current uptrend breaks and then USD/JPY heads below that neckline level, the pair could head south fairly quickly, with the run up from September’s lows potentially in question.

The Yen seems to be having obviously better luck against a generally beleaguered Australian Dollar. Fundamentally the Aussie is weighed down by AUD/USD weakness. One more US rate increase would see the Australian Dollar’s long-held yield advantage overt the greenback finally whittled away. That advantage has been a major post-crisis draw for the Aussie. More US rate hikes will only burnish the US Dollar’s comparative attractions.

Still, that weakness has left AUD/JPY stuck testing the lower boundary of a steep downtrend channel. The last four trading sessions have seen a little bounce, but only a modest one. Bulls have yet to retake even the first Fibonacci retracement of the fall from September 21’s peak. That lies above the market at 85.89, and will probably have to be topped if the downtrend is not to resume in earnest.