For our longer-term outlook on EUR/USD, check out the DailyFX Forecast.

A lot of noise was made when EUR/USD broke the ‘neckline’ of the ‘head-and-shoulders’ top, and we were indeed onboard with what was presented to us as a valid confirmation of the three-month pattern. However, last week’s surge pushed the euro well above the ‘neckline’ and the trend-line running down off the September high. The combination of technical breaches significantly decreases the likelihood of the ‘H&S’ pattern still holding any real weight. One could say the formation isn’t fully wrecked until we see the euro trade above the ‘right shoulder’, but with the sturdy trend-line broken along with the ‘neckline’ the probability of the formation becoming fully invalidated rose sharply last week.

This doesn’t mean EUR/USD is in the clear for higher prices just yet, though. The downtrend off the September high remains intact for now with the series of lower-lows and lower-highs still in place. It’s possible the Wednesday reversal-day marked the next lower-high in the sequence. This makes that particular day, and even more importantly, the area around 11876 so crucial. It’s the 2010 low, which is why it has received so much attention in recent months as both support and resistance. Strong clearance above will be needed before the euro can run. If we see a solid close above, preferably into the 11900s, the area surrounding the 2012 lows between 12000/100 or higher will come into focus.

For the landscape to turn decisively favorable for sellers, 11700 will need to be broken again. It’s not only where the ‘neckline’ of the ‘H&S’ lies, but has been a source of solid support at times since August. If we see a strong drop through, then the euro will be at significant risk of resuming the trend off the September high.

In the coming week we may not see a resolution, with both upper and lower-bounds coming into play (~11700 support, ~11876 resistance), but eventually something has to give. But to be clear, the once sturdy bearish top is in serious jeopardy, and this almost certainly has a once confident group of shorts feeling a lot less at ease than they did just a week ago.

Building Confidence can be a challenge, we’ve got some ideas which may help you. 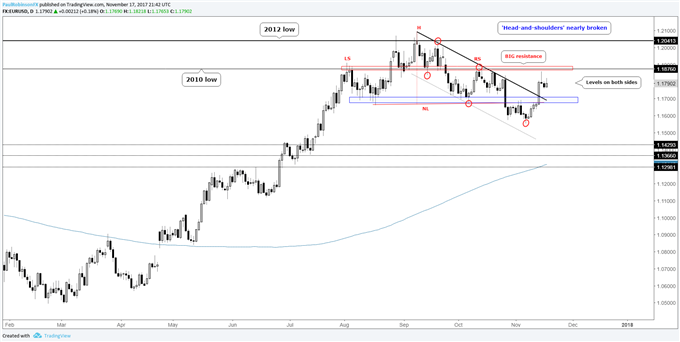