A new quarter is under way, what will it bring? Check out the new Fundamental and Technical Forecasts from DailyFX

The Japanese Yen has come under renewed fire against the US Dollar in the last couple of days. This makes eminent sense from a fundamental standpoint even if it leaves a few technical questions unanswered.

Interest rate differentials are firmly in the driving seat when it comes to almost any US Dollar currency pair you’d care to name. But they’re in particularly obvious command in the case of USD/JPY. The Bank of Japan left its extraordinarily accommodative monetary settings alone yet again on Tuesday, before Governor Haruhiko Kuroda recommitted once more to maintaining them until inflation picks up sustainably.

Contrast this with the US Federal Reserve which is widely expected to raise interest rates once again in December even as it leaves them on hold later Wednesday.

This prospect has been enough to put USD/JPY back into the uptrend channel from September 8’s lows, which had been briefly abandoned to the downside earlier this week. 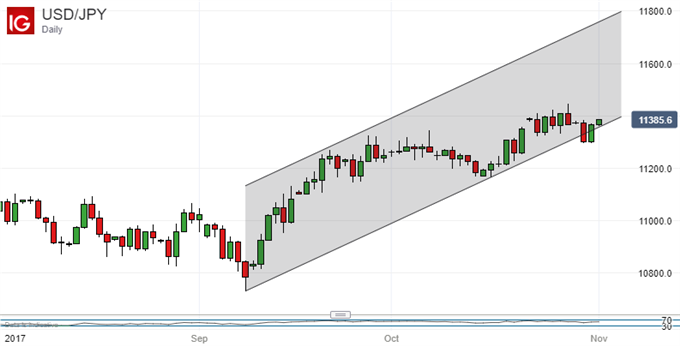 However it is notable that, even with this significant interest-rate-differential tailwind, USD/JPY has yet to convincingly top its last significant peak. That is July 12’s intraday high of 114.45. Indeed below that the 1114.12 area which capped the market last week continues to do so. 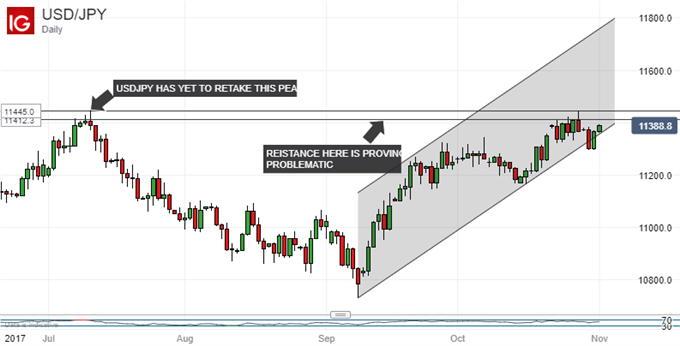 Of course the bulls may simply be waiting until they’ve seen the color of the Fed’s money – its November policy call will be made at 1600GMT Wednesday. With that key risk event out of the way they may be emboldened to make anotther try at that July 11 peak.

However it looks at least as likely that a new, near-term range is forming. Keep an eye on 113.90 to the upside and 111.69 below. These look like the bounds of a consolidative phase now under way. The greenback may well resume its climb once that phase ends but, with momentum indicators now comparatively subdued, that could take a few days.

Watch this week’s close carefully with regard to that range.

The New Zealand Dollar has come under a bit of pressure of its own recently as investors closely watch the first few days of its new coalition government. This pressure has been especially pronounced against the Japanese currency which clearly retains the upper hand against the Kiwi.

NZD/JPY remains mired in a downchannel which has been in place since September 21 and doesn’t look likely to break anytime soon. However, the New Zealand currency is looking a little oversold against its US cousin and a pause in NZD/USD’s pummelling could also see some respite for it against the Yen.