Where does the Japanese Yen stand in the retail foreign exchange pecking order? Check out the DailyFX Sentiment Page for more.

The Japanese Yen has had a pounding form the US Dollar since USD/JPY fought back from 2017’s low made on September 11.

However, that pounding has relented in the past couple of weeks with the pair stabilizing around the 112.70 area, having broken below the sharp uptrend that sustained its initial rise. 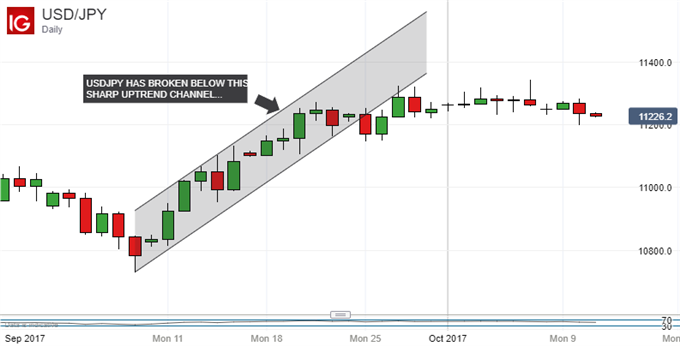 That said it doesn’t look as though the Japanese currency is set for a more forthright attack on its US counterpart, with the current phase still looking like consolidation before another push higher.

This makes some sense in fundamental terms. Interest-rate differentials remain in overall charge and the Federal Reserve is still apparently intent on tightening the monetary screws in December should the data let it. The Bank of Japan meanwhile remains absolutely committed to leaving its own screws extremely loose until inflation rises sustainably to target, something it shows little sign of doing anytime soon, if any time at all.

Technically it would probably be good for the bulls if they can keep the pair above the 111.47 point which formed an intraday low on two consecutive days in late September. Below that there is a cluster of support which stems from an area where the US Dollar got stuck in July.

Assuming these hold the Yen should come under renewed pressure in due course, with the bullish moving-average crossover I discussed in my last technical look at the currency still very much in play.

The Euro’s 2017 peak against the Japanese currency is more recent than the Dollar’s, having been made during late-September’s climb up to 134.37. EUR/JPY’s retracement since looks similarly consolidative to USD/JPY’s, however, and single-currency bulls are likely to remain pretty relaxed as long as near-term support holds.

That appears to come in in the 131.97 area which was both the closing high of September 12 and the point at which EUR/JPY bounced more recently, on October 8. 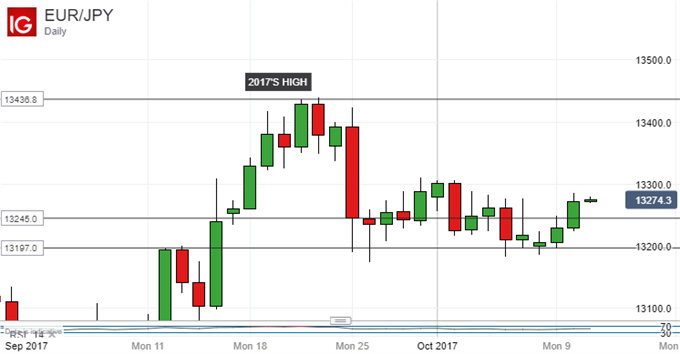