EURUSD Weekly Technical Analysis: Euro Setting Up for a Bounce

For a longer-term outlook on EURUSD, check out the just released Q4 Forecast.

The outlook for last week started with the bottom line stated as such: “Shorts look set to have the upperhand as a fresh month gets underway as long as the euro remains capped by resistance. On weakness, we’ll be watching how the euro responds to a drop into support levels.” Indeed, we saw weakness for much of the week, but looking ahead to next week the script is poised to flip. The euro didn’t push deep into the 11664/16 support zone we were watching, but it did traverse close enough to call it a test – especially when looking at the lowest closing value from August which was at 11723. The low of last week clocked in at 11669 just after the release of the U.S. jobs report. Friday ended with a small bullish key reversal-day. 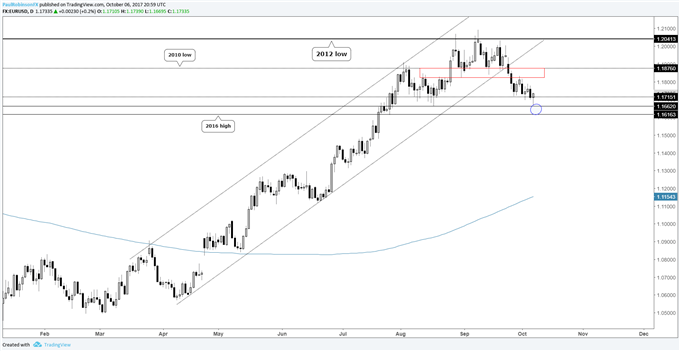 Turning to the 4-hr chart, there is a descending wedge developing. With a little more time, it could turn into a solid pattern leading to a rebound back to the 11825/80 zone. This pattern could of course could lead to a downside break of support, so playing the formation will require waiting for a closing 4-hr candle above the top-side trend-line. 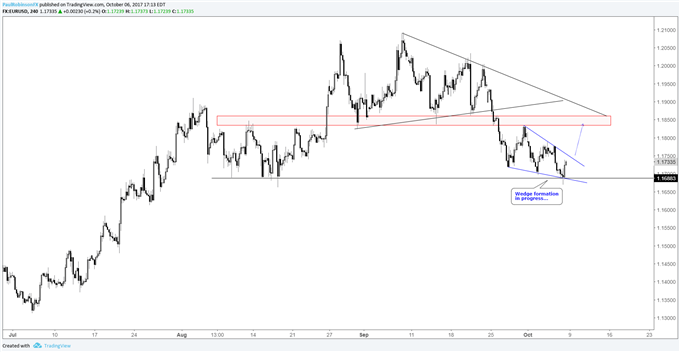 Taking a quick look at the US Dollar Index (DXY), of which the euro holds a ~57% weighting, it put in a bearish key reversal-bar after briefly taking out the August high. While the focus shifts lower in the short-term, the intermediate-term outlook, given the major support from which the DXY is bouncing from, will likely remain constructive following a retracement. It’s premature yet to delve into specifics, but with a modest push lower and turn back higher we could see an inverse ‘head-and-shoulders’ pattern come into view. More on that later should it become relevant… 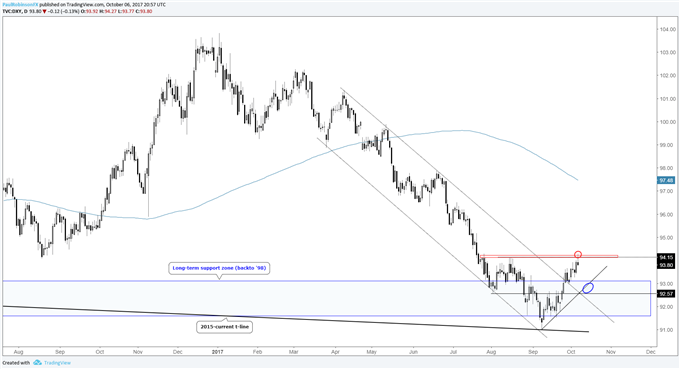