Just getting started in the USD/JPY trading world? Our beginners’ guide is here to help

The Japanese Yen has been hammered by US Dollar bulls in the past month, to an extent quite unusual this year.

The greenback has risen by nearly six full Yen since its lows of early September, as investors looked at stronger US economic numbers and a Federal Reservestill apparently intent on raising interest rates in December should those numbers hold up. By contrast in Japan ultra-loose monetary policy still rules and, while consumer price inflation is clearly rising in a way sure to please its own central bankers, a sustainable 2% rate remains a distant and possibly unrealisable dream. The resulting, wider yield gap in US Treasury’s favour hit the Yen too.

That quick fundamental detour aside, however, USD/JPY has clearly been in some sort of topping out process since September 21 and, although the days since include the current rally’s highs, the bulls seem be pausing for breath, at least. 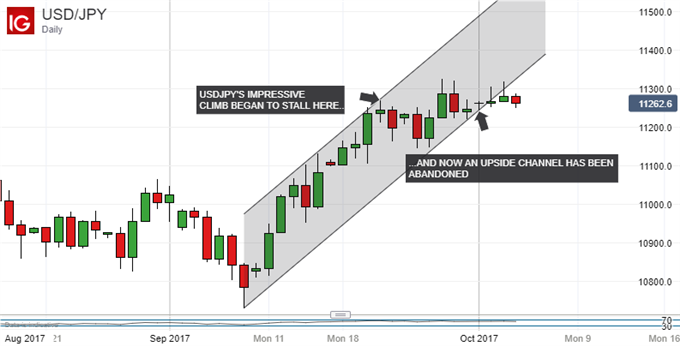 Still, for all the Dollar bullishness around its surely notable that if the pair does indeed top out around current levels, and retrace, then USD/JPY will have chalked up yet another ‘lower high’ on its daily chart. That will be the latest in a series that has so far marked 2017.

There remains some hope that the chain can be broken, although the last significant peak- July 10’s 113.95- remains some way off. However the bullish moving average crossover noted last week remains very much with us. Indeed the 20-day average has now crossed above both the 50- and 100-day versions.

This argues for some consolidation in the Yen’s favour, but probably not any sort of trend break. Whether or not the Dollar can then go on to break that former high is the major question bulls must now answer.

Meanwhile the Euro currently looks more obviously bullish against the Japanese currency, despite the political turmoil swirling around Spain’s Catalonia region, whose government would like to secede. The Euro made a new 2017 high at the end of September and seems to have avoided the “head and shoulders” pattern which might have pointed to a reversal. Indeed,the solid uptrend from mid-August’s lows looks intact. 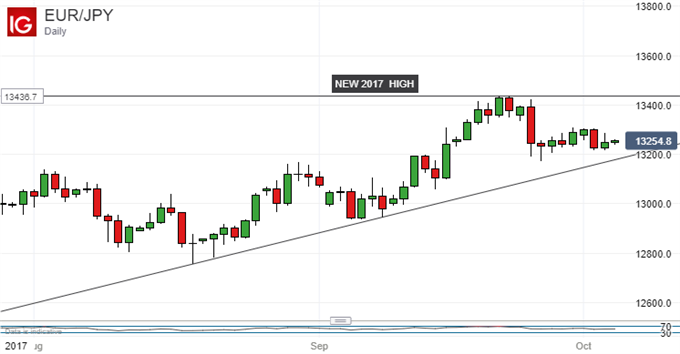 However, it is probably worth keeping an eye on possible “shoulder level” support in the 132.00 area, as a fall to that level and below could be bearish for the cross. 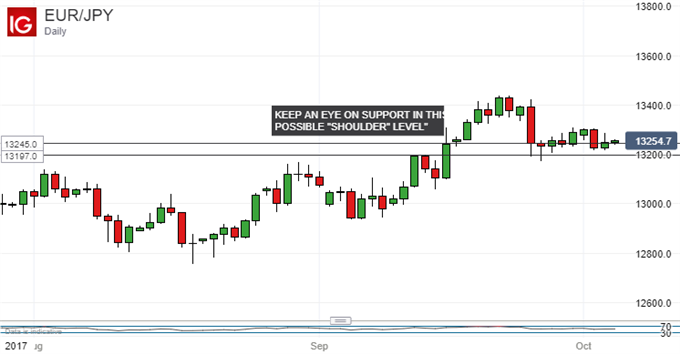