The Japanese Yen has shown some signs of composure against the US Dollar in recent days, but there is little reason to think that that will endure.

USD/JPY had climbed quite sharply back up from September 8’s 107.30 intraday low - which is also the nadir for 2017 so far. But climbers appeared to lose heart last week having scaled the 112.70 area which appears to be at least a short-term cap. The greenback has been loitering below it for the past five days, to the point where it is outside an uptrend channel which had held since that 107.30 low. 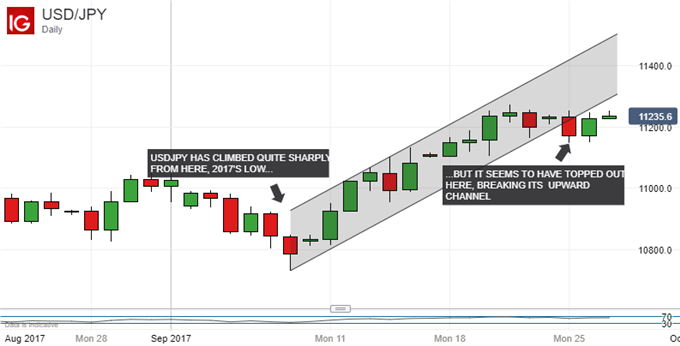 So, is this a mere pause for breath on the part of US Dollar bulls or is the Yen about to stage any sort of comeback. Well, at least one omen would seem to favour ‘option A’ there. September 20’s bullish moving-average crossover was in its infancy when I last looked at the Japanese Yen. But it has endured, matured and now looks a lot more convincing. For the uninitiated in moving-average arcana, it’s held to be a good sign for bulls when a shorter average crosses above a longer one. This happened last week when the 20-day crossed above the 50-, where it remains. 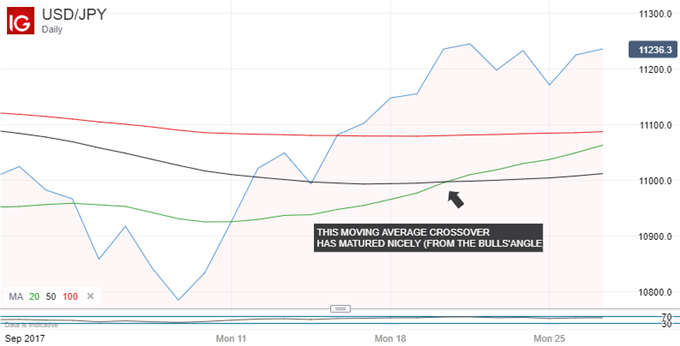 The pair remains above all three averages, too. Of course, no indicator is utterly infallible. Moreover, USD/JPY remains fundamentally hostage to the risk-appetite-sapping properties of the nasty spat between Pyongyang and Washington DC and now, the vicissitudes of Japanese politics as a snap election looms. However, assuming calm on both fronts, it seems most likely that the Yen has more to suffer yet against the US Dollar.

The Japanese currency looks even more heavily beleaguered against the British Pound. GBP/USD made another new 2017 peak just six days ago and has refused to fall very far since. There’s fundamental backing for this as markets move to price in a more hawkish Bank of England. 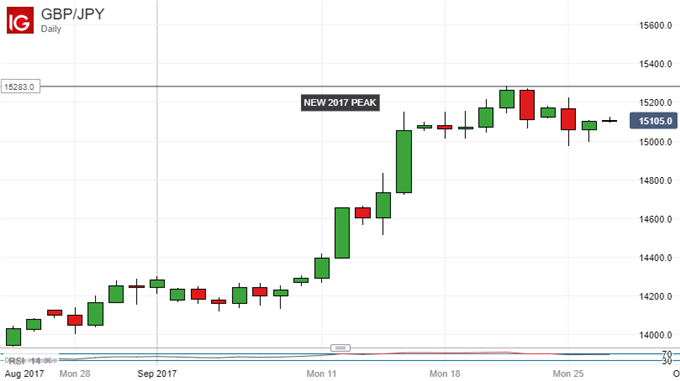 However, that process has seen the Pound veer into “overbought” territory as far as its Relative Strength Index is concerned. It’s no longer there, the RSI has retreated back below the 70-line danger zone. But it hasn’t retreated far and it might not make sense to rely on too much more momentum for sterling without at least a pause for reflection.