Where does the Japanese Yen stand in traders’ affections right now? Take a look at the DailyFX Sentiment Guide

The latest bounce of US Dollar weakness has come at an interesting point for the USD/JPY pair.

Having confirmed another lower high in the past week or so, the US Dollar has crumbled toward that interesting support zone in which the gap between two significant intraday lows (those of June 14 and April 17) guards 2017’s overall nadir. That’s the 108.11 level set on April 14.

This support zone has seen steadfast defence since the first approach on August 10, but current bearish conviction seems to be of a different order than anything seen before. It has already taken USD/JPY towards the bottom of that support zone and, at the time of writing – 03:00 GMT Friday – a daily close below it seems all-too likely.

Should bulls gird themselves for one final desperate defence, then USD/JPY will remain under pressure from a well-entrenched downtrend. In all likelihood, the day of reckoning will merely have been postponed. 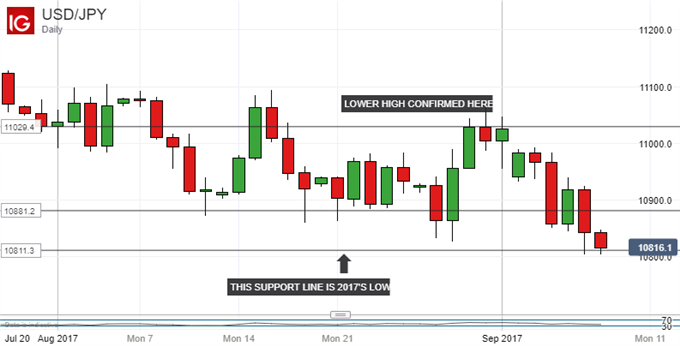 Should 2017’s low give way on this attempt then many if not quite all bets will be off and the long climb up from November’s lows in the 103-area will be back in play. That rise came about as part of the so-called “Trump trade” in which investors got over their shock at Donald Trump’s presidential win and decided to back the Dollar, hoping for a raft of business-friendly policies. Now not so much, it seems.

The Japanese Yen’s fortunes against a resurgent Euro, meanwhile, could hardly be more different. The single currency has the Yen on the ropes, having made new highs against it at the end of August. However, while momentum indicators don’t suggest that the bulls have had their fill yet, EUR/JPY has only just managed to scrape back above a notable short-term uptrend channel. Even if September 5’s slip below its lower boundary was spurious, it might pay the uncommitted to sit back a day or two to see how things develop. While the Euro doesn’t look to be in any kind of trouble, it remains to be seen whether its numerous current bulls have the appetite to push the year’s top any higher.

Why not wait and see whether we have a genuine resumption of the current uptrend? It should only take a day or so. 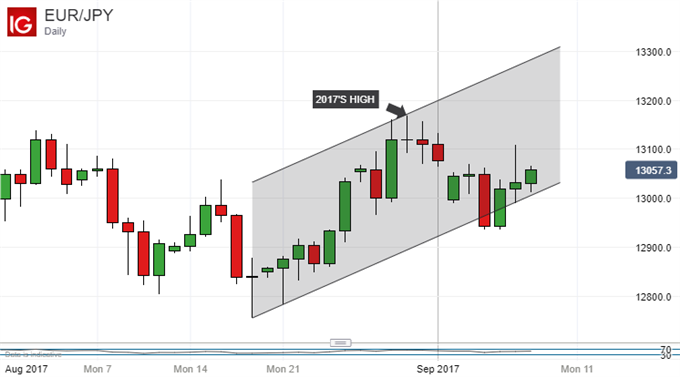 Gold and Silver Technical Outlook: Upside Could be Capped for Now