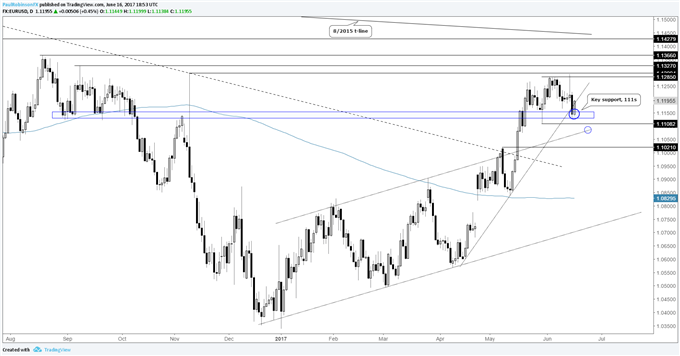 Check out our Trading Guides to find out what’s driving EURUSD and other currencies.

Heading into last week the euro was set up for a move into resistance levels up towards the 11400s, and on Wednesday it was looking poised to do such. That is until a hawkish Fed put the brakes on the slide in the US dollar, sending EURUSD sharply lower. The rejection bar certainly brought the bullish case under fire. The remaining two sessions of last week were spent testing key support in the 11100s, and while the trend-line running higher from April was broken, as long as a move doesn’t gain momentum beneath the 5/30 reversal day low the outlook is neutral to bullish.

A break below the swing-low in May, though, would open up a path for a deeper retracement towards 11021 or worse. Possibly helping keep the euro buoyed in the event of a breakdown is the upper parallel belonging to the trend-line running up from the December low. It’s only viewed as minor in significance at this time until we see how the market would respond at that point to selling pressure.

Overall, the technical backdrop has weakened a bit, but, again, as long as support holds in the 11100s a neutral to bullish stance will be maintained. A move back towards 11300 would help further consolidate gains acquired during the run dating back to the earlier-part of April. Looking bigger picture, this could be quite constructive later on for putting together another run.

The economic calendar next week holds no ‘high’ impact data events, but there are a few ‘medium’ impact events scheduled; mostly on Friday with numerous Euro-zone and U.S. Markit PMIs due out. For details, see the economic calendar.