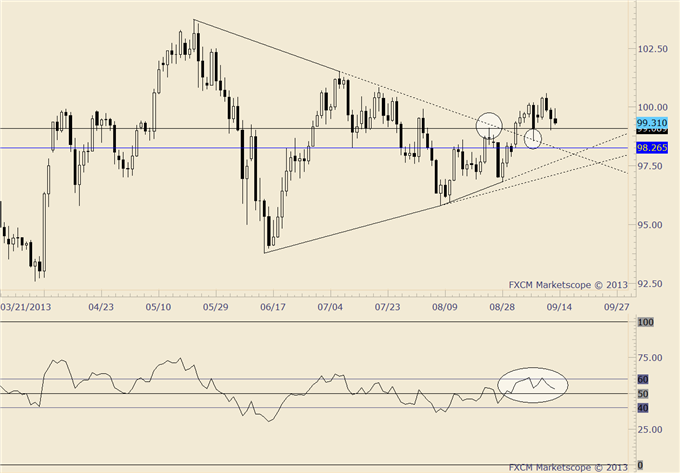 2013 began with strong trending moves in the Japanese currency and stock market. The USDJPY, Nikkei 225, and ZARJPY have broken through May-July trendlines. The seeds may be sown for these markets to end the year as they began…in strong trends.

-USDJPY low for the month at 98.27 is still the first trading day of the month. In bull trends, early month lows and late month highs are common.

-Last Friday’s (9/6) USDJPY slide found low at the topside of former trendline resistance. Daily structure is considered healthy as long as the daily close is above 98.80 (prior closing peak).

-A small range key reversal on Wednesday is still in place but the dip found support near last Friday’s close and from former resistance at 99.14 (8/23 high).

-Daily RSI has exceeded 60 twice in the last 2 weeks but failed to stay above the barrier. This is a concern for bulls. 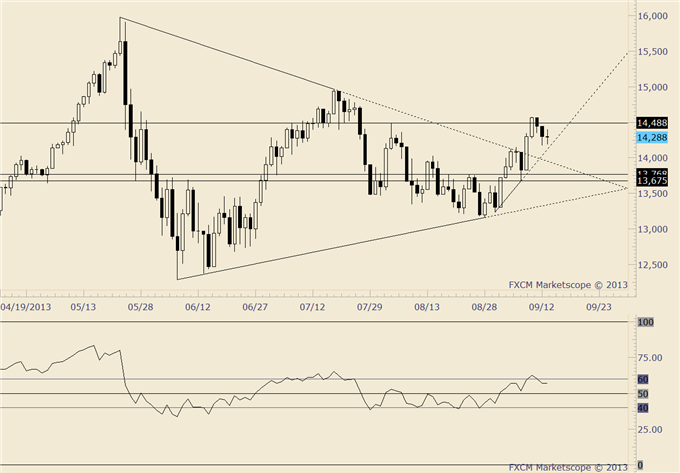 -The Nikkei 225 broke through the line that extends off of the May and July highs on Monday (9/9). The break increases confidence in the USDJPY break one week earlier (on 9/2).

-The decline from the July high to the August low is in 3 waves (corrective), implying that 14963 will be broken before 13160 is broken. Wave C took the form of a diagonal and has been completely retraced.

-The rally from 13160 unfolded in 5 waves (impulsive). Impulsive channeling suggests that the presented account is the correct count (impulsive channel – connect waves 2 and 4, then extend a parallel line to the top of wave 3. That line often estimates the end of wave 5).

-The pullback from 14578 stopped 10 points shy of the former 4th wave area (14158-13675) on Thursday. 5 wave rallies are followed by 3 wave declines that often end near the previous 4th wave extreme (circled), which is also the 61.8% retracement in this instance. That level is support if reached but I’m not dismissing gains from the current level as real markets rarely follow textbook scripts and the near term momentum profile has changed. Since the 13160 low, price tops have occurred when RSI (4 hour) is above 70 and price lows when RSI is near 50. This is an example of a bullish momentum profile (see the left side of the chart as well). 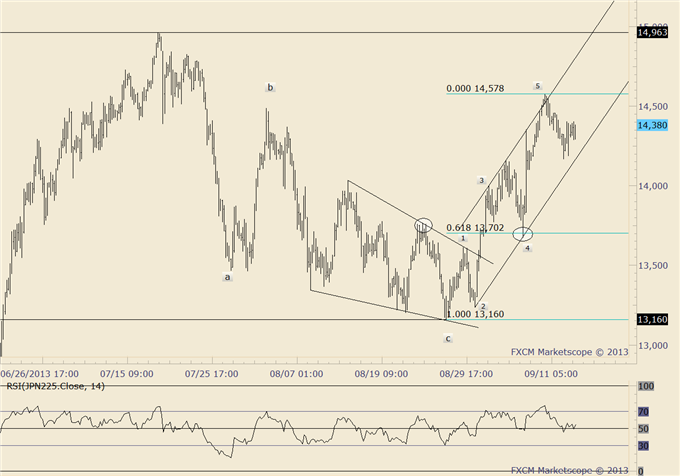 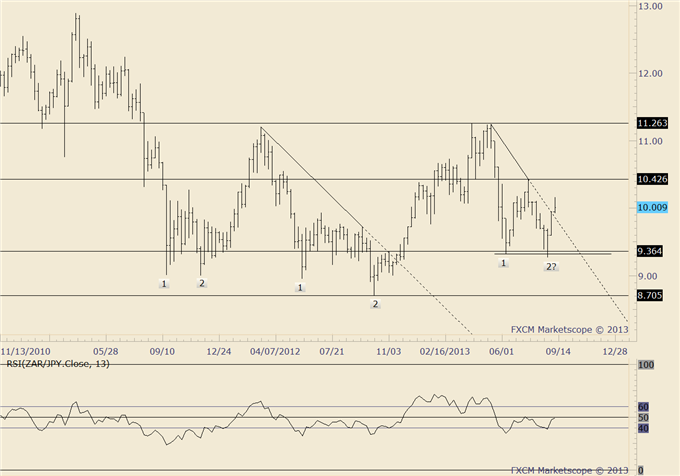 -ZARJPY has made important lows at this time of year in recent years. The 2011 low occurred in September. The 2012 low occurred in October. In other words, frequency of lows is roughly 1 year.

-Price has broken the line that extends off of the May and July highs as well as the series of highs from 8/9-8/15.

-Weekly RSI(13) has crossed above 40. A bullish momentum profile is one in which RSI exceeds 70 at price highs and holds above 30 at price lows (the higher the RSI figure at the low, the stronger the market).

-Getting ahead of ourselves here…but price could be forming a massive inverse head and shoulders pattern (upward sloping as well).

Strategy – Watching for support from the top side of the broken trendline near 9.84.