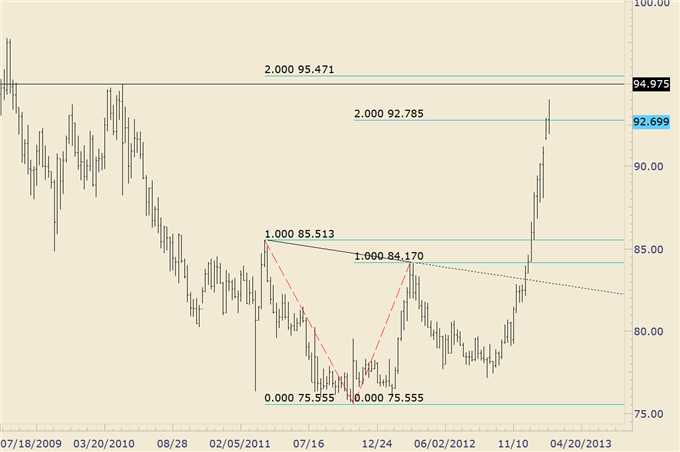 Focus this week is on the Japanese Yen and for good reason. A host of technical signals, from candle patterns and weekly reversal bars to CME volume (on both the Nikkei and Yen) suggest that the Japanese Yen is at a pivot in price.

FOREX Observation: As focused on in recent weeks, the USDJPY has reached its first target (9279) from the nearly 2 year inverse head and shoulders target. On a weekly closing basis, the objective may have called a top of sorts (last week’s close was 9277). A close below 9277 would leave a weekly key reversal on the largest one week volume (CME) since the March 2011 intervention. Want another sentiment extreme? The CME just raised margin requirements on the Yen.

FOREX Trading Implication: Expectations are for additional weakness. I won’t even start looking for a bounce until 9025-9125 or when/if daily RSI crosses below 60. 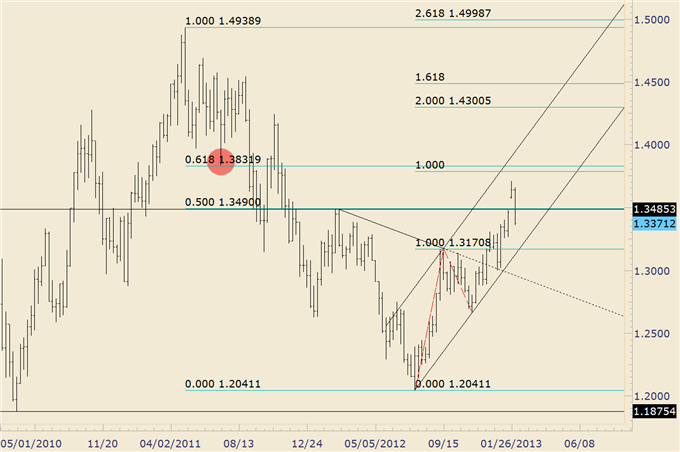 FOREX Observation: The EURUSD volume (CME) profile tells quite a story as well. Last week’s volume was the highest since the week that ended 7/27/2012 (that was the week of the low). That bit of information is bearish but this week’s volume is even higher (highest since November 2011) which warns of possible capitulation on the downside. Last week’s high of 13711 seems like an odd place for an important top to form as well. A Fibonacci confluence rests above 13800 and the long term head and shoulders target is at 14300. Kristian Kerr wrote a The daily RSI profile remains quite bullish as long as price is above 13255. 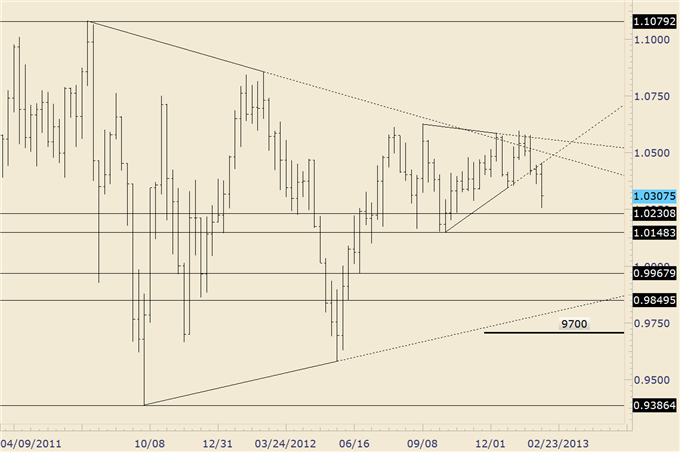 FOREX Trading Implication: Shorts remain in play against 10460. I’ll look to tighten the stop when appropriate. 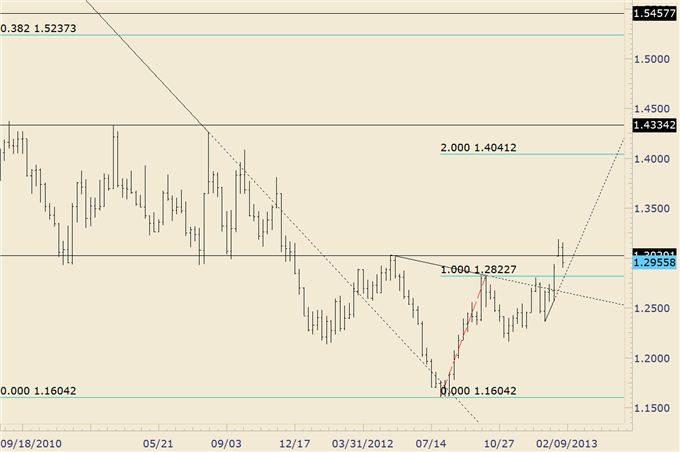 FOREX Observation: “The EURAUD has broken through the neckline from the inverse head and shoulders pattern that begin in February 2012. Long term objectives don’t begin until the March 2011 high at 14343.” The drop, while sharp, is nearing support from the trendline that extends off of the 1/10 and 1/22 lows. A drop below there would shift focus to 12837/70.

FOREX Trading Implication: I’m looking to buy weakness below 12899. If that level is not reached by Monday then I’m likely to go long after Monday. 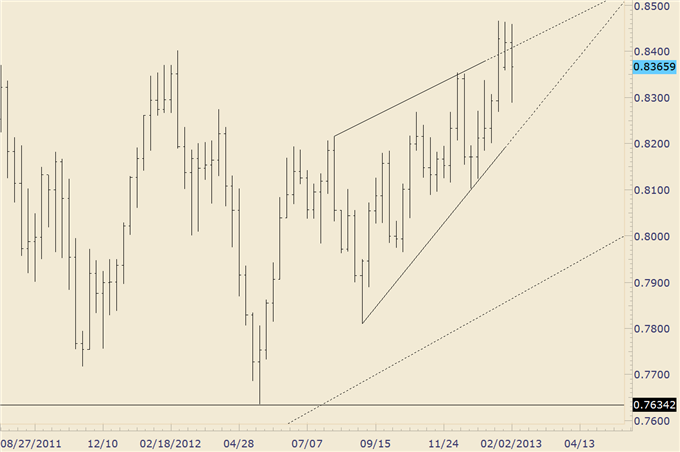 FOREX Observation: Nearing the 2007 high (just like equities…), the NZDCAD advance from the 2012 low may compose an ending diagonal (classical technicians refer to the pattern as a wedge). Diagonals are terminal patterns that are often completely retraced quickly. A break below the diagonal support line is needed before we can proclaim the pattern complete.

FOREX Trading Implication: The tipoff that this may be an ending diagonal is the push through the diagonal resistance line and subsequent failure. In order to trade from the short side though, a drop below the diagonal support line is required. That line is at about 8236 next week. IF the diagonal is confirmed, then the objective is the origin of the pattern, at 7635.