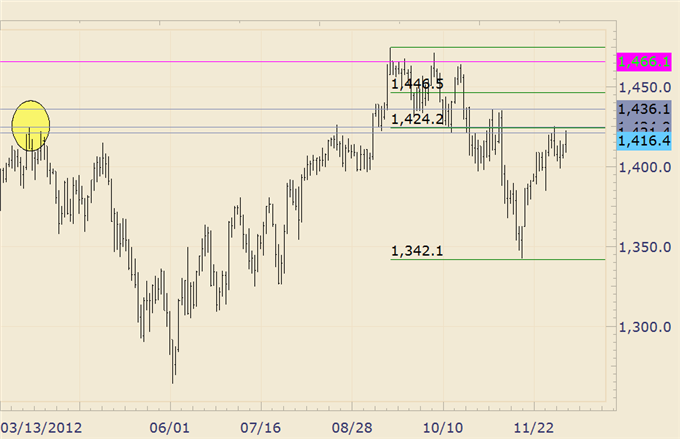 Equity Observation: Keeping this market down is like holding a beach ball under water. The S&P continues to press the mid-1420s. Recent articles noted the significance of the level - “The mid-1420s should produce a top. Of what significance I’m not sure but it’s possible that the top constitutes a secondary top ahead of the high (either a 2nd wave or B wave). The 61.8% retracement of the decline from the top comes in at 1424.20. More importantly, 1424.9 is the April high.” The market continues to respond to 1424 but exceeding Monday’s high would open up 1436 (former resistance) and 1446 (78.6 retracement). Subjectively speaking, action since the 12/3 low has the look of a base that will lead to upside continuation.

Equity Trading Implication: If the market falls sharply on Monday, then I’m looking to get bullish between 1401/05 for a final run. The 12/5 low is the invalidation point. 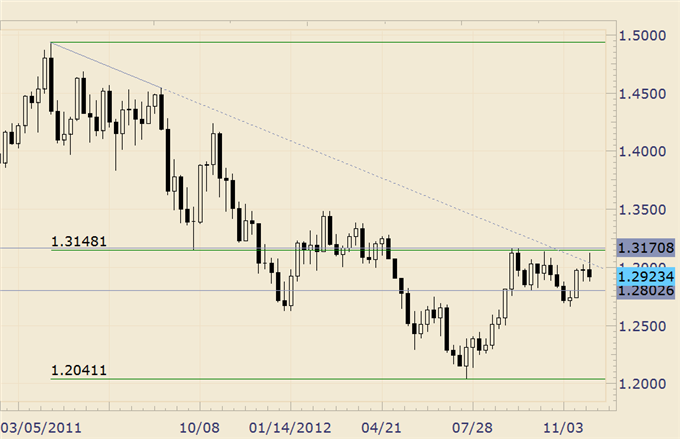 FOREX Observation: The near term EURUSD pattern is clean. Work on the temporary when the market allows for risk management purposes. The decline from 13126 unfolded in 5 waves (impulsive). The decline probably composes wave A of an A-B-C correction. A rally, probably wave B, is expected from the current level. Perhaps such a rally culminates in fiscal cliff or QE ‘news’ before being completely retraced at the end of December in wave C (late December illiquid markets have been known to exacerbate short term moves). 12837 (61.8%) and perhaps 12800 would come into focus later in the month. 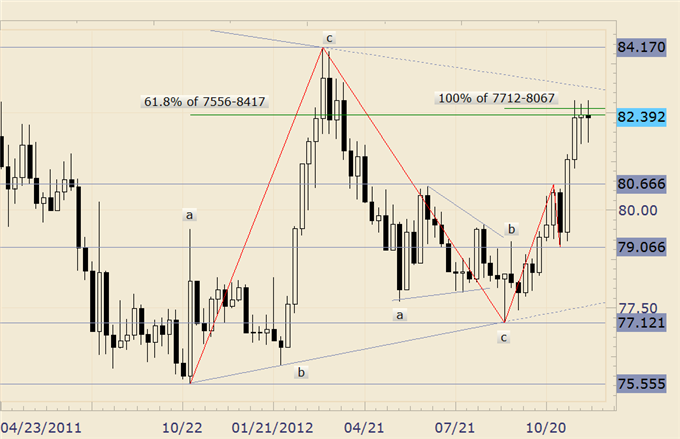 FOREX Technical Analysis Observation:Longer term, there is no change from last week. “The USDJPY was unable to exceed its prior week’s high (inside week was made too), which is significant when viewed in light of WHERE the USDJPY is right now. Yes, action since October 2011 could be the major long term bottom that many are looking for but other possibilities exist, notably a triangle. In fact, movements in both directions since the 2011 low consist of 3 waves, which is consistent with a triangle. Alternating legs in triangles often relate by a Fibonacci 61.8%, which is the case right now. Digging even deeper, the rally from 7712 subdivides into 2 equal legs (consistent with a correction). Not shown is the 78.6% retracement of the decline from 8417, at 8266.” In other words, the USDJPY has spent several weeks consolidating at resistance. Near term, the consolidation may take the form of a triangle before price thrusts above 8300 and reverses. Weakness below 8170 would suggest that a more substantial correction of the advance is underway.

FOREX Trading Implication: Working from the triangle interpretation, a sharp drop into 8200 would be worth a shot on the long side with a 8165 stop. I don’t like the idea based on the reversal following NFP however. Reversals on news are often liquidity events that mark the end of a larger move. FOREX Technical Analysis Observation: The EURJPY reversed several pips shy of 10800 this week. I wrote last week that price is “pressing against significant resistance defined by support from May 2010 to the October 2011 intervention low, channel resistance and long term trendline resistance (price closed slightly above the long term trendline this week…we should know if the break is ‘clean’ soon…after all, we’ve seen many more false breaks recently than clean breaks). Additional resistance comes in at 10800 (April 20th high). For those classic candlestick folks out there, the weekly carved out a hanging man.” A key reversal unfolded this week (although not a JS Spike) and the decline from the high is in 5 waves (as are all Euro pairs). Like the EURUSD, a corrective recovery might take most of next week. Resistance is 10707/50.

FOREX Trading Implication: I am looking to short above 10700 for a tag of 10527. The GBPJPY is also worthy of consideration as price struggles to clear channel resistance and the 3/21 reversal day close. The Euro arena is more volatile these days. Volatility clarifies. 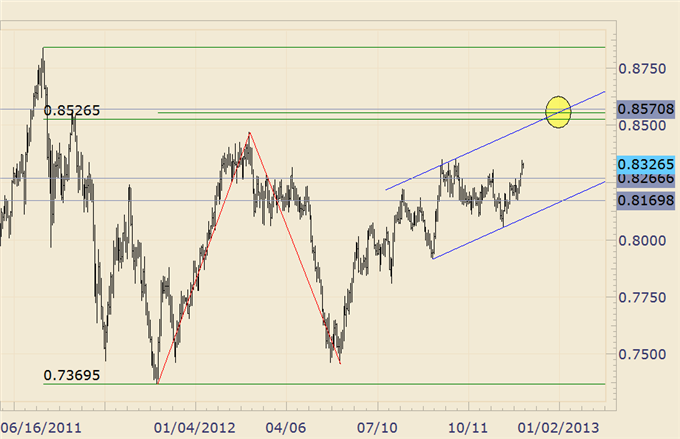 FOREX Technical Analysis Observation: The NZDUSD has headed straight up since 8170. Given the reaction at channel resistance Thursday and Friday’s inside day, there is the possibility that the advance from 8052 composes wave B of a triangle or flat that began on 9/28. That scenario is not viewed as probable as long as price is above 8170 however. A Fibonacci confluence and August 2011 high intersects with a channel at the end of December.

FOREX Trading Implication: Weakness into 8240, especially if on Monday, would be worthy of bullish consideration against 8170 for a year end run at 8550. One may wish to consider playing NZD strength on crosses as well, especially EURNZD.