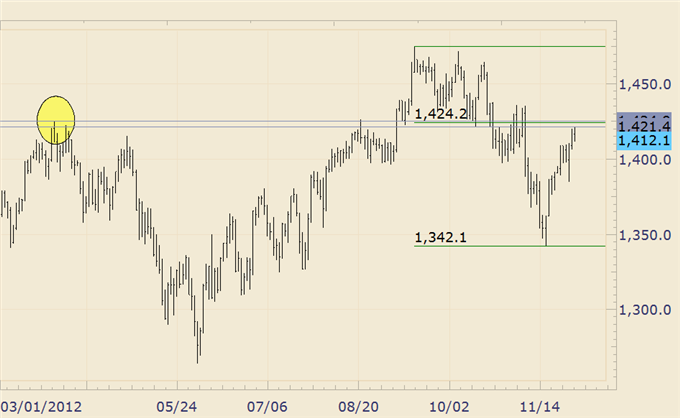 Equity Observation: After dipping to 1384.9 mid-week the S&P 500 reversed to end the week about 7 handles higher. After all that, the picture going into next week is unchanged from last week. “The mid-1420s should produce a top. Of what significance I’m not sure but it’s possible that the top constitutes a secondary top ahead of the high (either a 2nd wave or B wave). The 61.8% retracement of the decline from the top comes in at 1424.20. More importantly, 1424.9 is the April high.” Don’t forget the 10/15 low at 1421.4 either. Friday’s high was 1421.1 so the market is at the lower end of the resistance zone. For good measure, extend the top of the zone to 1430.

Equity Trading Implication: On the lookout for a top into 1425/30? 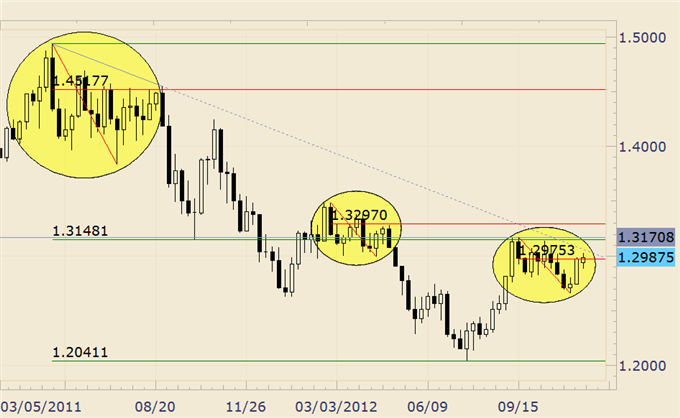 FOREX Observation: As we enter the final month of 2012, it’s worth noting that the EURUSD opened the year at 12935, just 70 pips below the current level. Price is going to open up just below a long term trendline Sunday night and action at the line should help handicap what to expect. Notice also that price continues to trade around the 61.8% retracement of the decline from the September high. If action since September is distribution, then it looks awfully similar to the topping processes that began in April 2011 and February 2012. In both instances, the EURUSD retraced 61.8% of respective 3 wave declines before breaking sharply lower.

FOREX Trading Implication: I prefer to trade from the short side but near term pattern lacks clarity for a bearish entry. In other words, it’s unclear if the market has topped or is in the process of registering a top at higher levels (13070?). 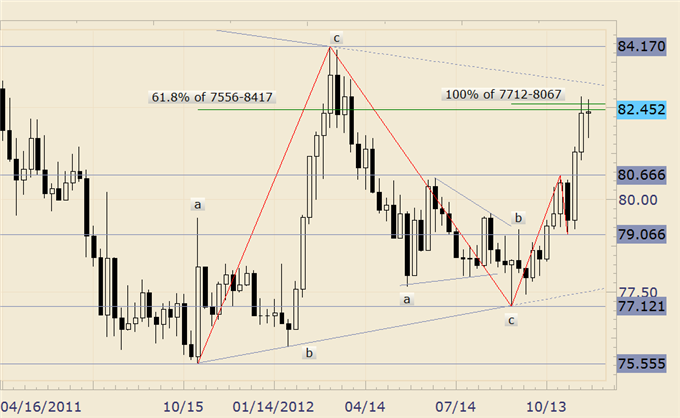 FOREX Technical Analysis Observation:The USDJPY was unable to exceed its prior week’s high (inside week was made too), which is significant when viewed in light of WHERE the USDJPY is right now. Yes, action since October 2011 could be the major long term bottom that many are looking for but other possibilities exist, notably a triangle. In fact, movements in both directions since the 2011 low consist of 3 waves, which is consistent with a triangle. Alternating legs in triangles often relate by a Fibonacci 61.8%, which is the case right now. Digging even deeper, the rally from 7712 subdivides into 2 equal legs (consistent with a correction). Not shown is the 78.6% retracement of the decline from 8417, at 8266. Of note is the potential head and shoulders neckline, at 8313 next week.

FOREX Trading Implication: I am bearish although not yet short. The inside week offers an opportunity to short on intraday setups against the recent high. 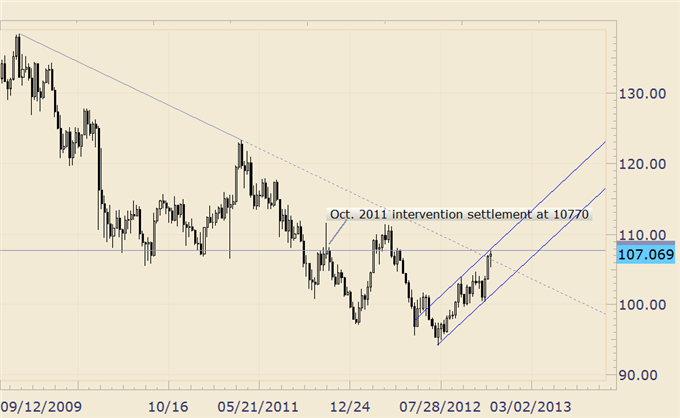 FOREX Technical Analysis Observation: The EURJPY is pressing against significant resistance defined by support from May 2010 to the October 2011 intervention low, channel resistance and long term trendline resistance (price closed slightly above the long term trendline this week…we should know if the break is ‘clean’ soon…after all, we’ve seen many more false breaks recently than clean breaks). The high this week is 10767 which may seem random but closer inspection reveals that the October 2011 intervention week closed at 10770. Additional resistance comes in at 10800 (April 20th high). For those classic candlestick folks out there, the weekly carved out a hanging man.

FOREX Trading Implication: My feelings here are the same as my feelings regarding the USDJPY. That is, we’ve reached a level where fighting this move is worth a shot. The GBPJPY is also worthy of consideration as price struggles to clear channel resistance and the 3/21 reversal day close. 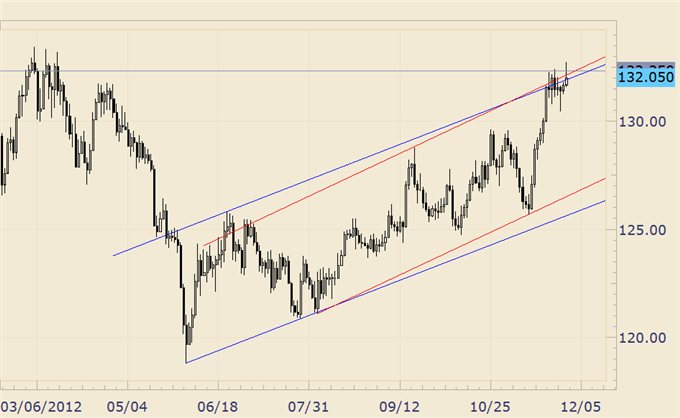 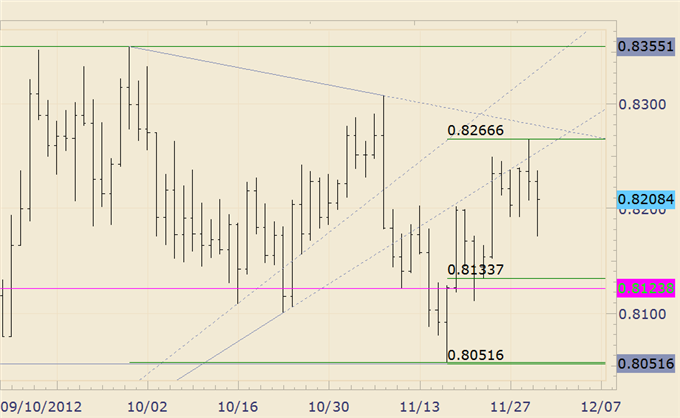 FOREX Technical Analysis Observation: Former trendline support continues to serve as resistance in NZDUSD. The divergence between the AUDUSD and NZDUSD that is common at turns occurred today. Bigger picture, the NZDUSD appears quite bullish as the decline from 8355 is in 3 waves (corrective) and the rally from 8052 is in 5 waves.

FOREX Trading Implication: I’m looking lower for the next few days towards 8125/50 but into a low. Combine the NZDUSD analysis and EURUSD analysis and you’ve got a topping EURNZD.