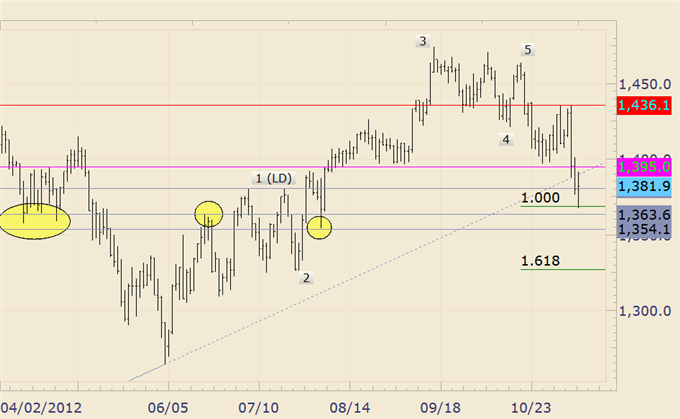 The weak end to the week in risk trends suggests that participants are positioned for immediate losses but selling pressure has actually decreased from Wednesday’s climax. As such, don’t be surprised to see an early week rally followed by more downside.

Equity Observation: The S&P 500 closed the week beneath the trendline that extends off of the 2011 (October 4th) and June 4th 2011 lows. A large range decline (JS Thrust or JST) occurred on Wednesday and the high for the month occurred on the second day of the month. Overlap with the 7/19 high eliminates the 4th wave interpretation and suggests that the advance from the June low is complete with a truncated 5th wave on October 18th.

Equity Trading Implication: The presence of the 100% extension of the decline from the 10/18 high, which was reached today leave bears at risk of a bounce or even complete reversal of the decline. However, objective measures such as the Wednesday’s JST and monthly opening range implications DO favor a bearish bias as long as price is below 1436.10. The weak end to the week suggests that participants are positioned for immediate losses but selling pressure has actually decreased the last several days. As such, don’t be surprised to see early week strength into 1395, which would also result in a test of the underside of the now broken trendline. A ‘surprise’ rally would open up the door for renewed selling pressure towards former responsive levels at 1364 and 1354. The 161.8% extension, which intersects July lows, is probably of interest later in the month just below 1330. 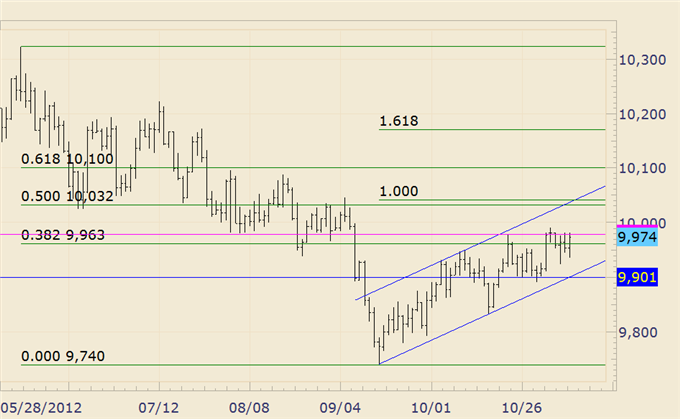 FOREX Observation: 3 wave declines in the USDOLLAR, from the 10/10, 10/23, and 11/5 highs suggest that the trend is higher. A flat correction from Wednesday’s high appears to have completed at Friday’s low.

FOREX Trading Implication: As long as the USDOLLAR is above the 11/1 low of 9901, look higher towards the Fibonacci confluence in 10030s. If interpretation of price action composing a flat since Wednesday is accurate, then price should stay above Friday’s low. 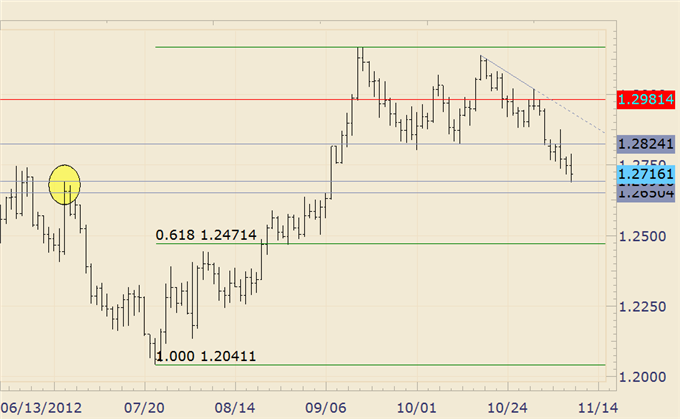 FOREX Observation: The EURUSD entered and held the top of the 12650/91 support zone Friday after finally penetrating the 38.2% retracement of the rally from 12041 (retracement was 12740). Friday’s outside day should be viewed as potential short term (1-2 days) exhaustion given that it comes after several weeks of weakness.

FOREX Trading Implication: Similar to the S&P, I’d not be surprised to see a more pronounced response from these levels and probe of 12800. Former support at 12824 is of particular interest. Strength above 12800, especially if on Monday, would present an opportunity to align with weakness against the November 1 high of 12981 for a test of 12607 (50% retracement) and potentially 12471 (61.8%). 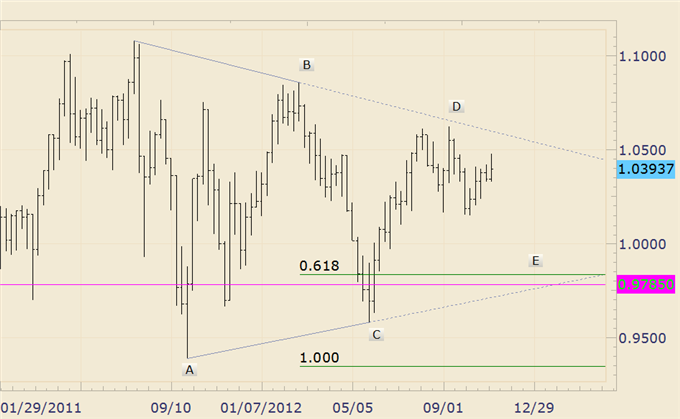 FOREX Observation: Keeping in mind the longer term AUDUSD triangle, we should respect potential for another bear leg towards parity or below in order to complete triangle wave E…and probably from nearby levels. Wednesday’s price action constitutes a JS Spike (emotional top).

FOREX Trading Implication: Market risk is lower against 10480. 10275 and 10192 are levels that the AUDUSD may respond to on an interim basis. Alternate triangle legs often relate to one another by a .618 multiple which in this case comes in at 9835. Again, pattern interpretation is fairly subjective but Wednesday’s JS Spike is the objective trigger that leaves me bearish. 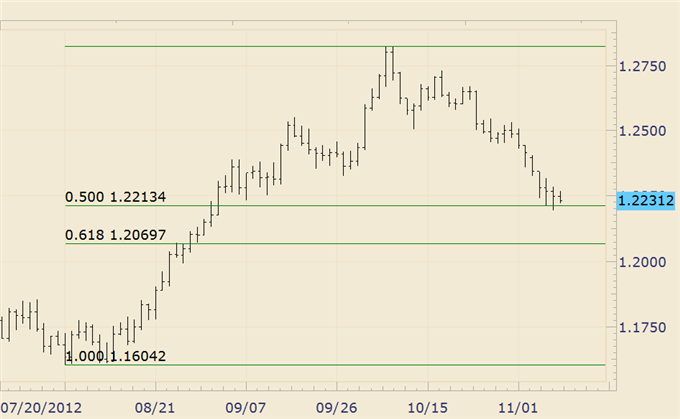 FOREX Observation: The EURAUD is steadying on the 50% retracement of the rally form 11604. This level I reinforced by the September low. Friday’s inside day provides an objective trigger point.

FOREX Trading Implication: There are 2 ways to trade inside day setups. The aggressive method is to trade a break of the inside day price extremes. The conservative way is to trade the break of the day prior to the inside day price extremes. A stop is placed on the other side (if a long were taken above Thursday’s high of 12287 then a stop would be below Thursday’s low of 12195). The setup can generate a reversal or continuation trade. In this instance, I am not keen on trading continuation (short) but would trade reversal (long). 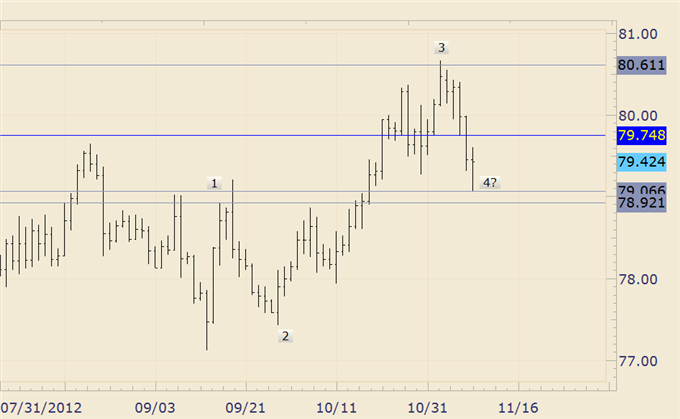 FOREX Technical Analysis Observation: If USDJPY weakness is a 4th wave, then price needs to stay above 7982 (allowing for a spike is ok). The response just below 7927 (and right at estimated 7907 support) is a good start. Keep in mind that 4th waves are often more complex than 2nd waves thus we could be in for sideways trading for several weeks too.

FOREX Trading Implication: I’m wary of trading this from the long side for many reasons including the failed break at above 8061, bearish implications from the S&P (over the course of November…at least), and a high in place on day 2 of the month (opening range implications). There are plenty of interpretations that allow for weakness and this count may very well be wrong. It’s worth keeping in mind, but there are far better setups that warrant action.