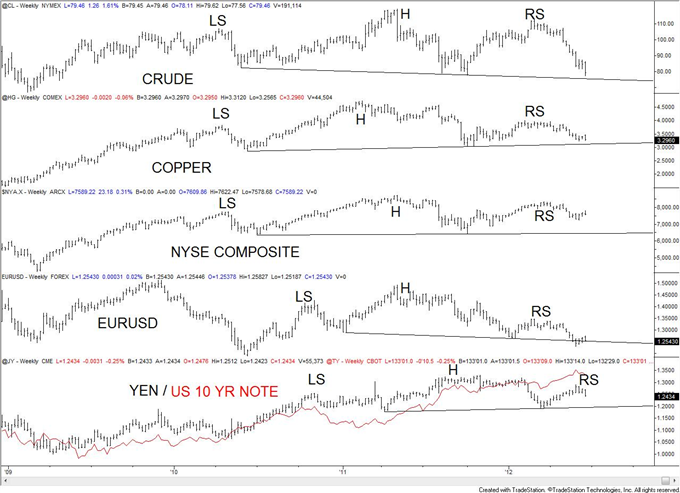 We’ve focused on charts similar to the one above since March, in these pages and at various seminars around the world. It’s time for an update. The story being told by markets remains one of slowing global economic growth. Interest in the story is on the rise as key markets such as crude oil and copper approach multiyear support lines (head and shoulders necklines). The downward sloping neckline on crude portends an especially weak market (Some may take issue with this because these charts are of continuous futures, rather than spot. The crude spot market shows a much higher right shoulder and upward sloping trendline but does indeed show a multiyear topping pattern). Breaks of these long term supports will probably trigger the panic portion of the story in the coming weeks and months. US stocks have been lagging but may play catch up over the summer with a secondary top potentially in place this week (see next chart).

Of particular interest to FX traders is the emergence of topping patterns in both the Euro and Japanese Yen (Yen futures shown to correlate with EURUSD). Both currencies have been carving out topping patterns since late 2010. Viewed through this lens, it’s not out of the question that we’ll soon see a much stronger USD against both the Euro and Yen (and a more or less sideways EURJPY). Specific to the Yen, the divergence between the Yen (not a new record high) and 10 year Treasury note (new record high) remains in place and is characteristic of long term reversals. 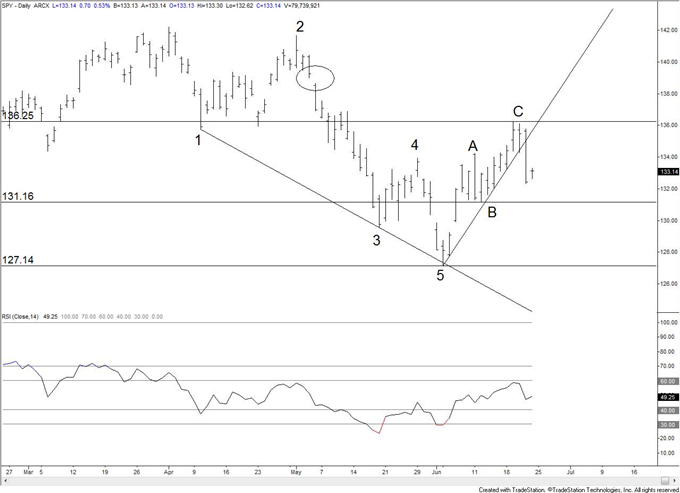 A projected topping date was today but the top came a few days early. The veracity with which the market fell on Thursday gives credence to the interpretation that the rally from the 6/1 low is complete. To be sure, markets don’t move in straight lines and there’s sure to be jockeying by both sides next week if for no other reason than to produce doubt amongst participants regarding the larger trend.

Intraweek highs and lows occur most often on Mondays and Fridays. Interest is (or should be) piqued when a high (or low) is made on Wednesday or Thursday and price subsequently breaks the Monday low (or high). In other words, the Monday price extreme holds for much of the week before failing fantastically. If something seems rare and possibly telling, then test it. What are the implications for next week?

The conditions for the test are:

(switch lows with highs and highs with lows for bullish reversal)

These conditions were satisfied for the NZDUSD, AUDUSD, GBPUSD, and USDCAD. The results are for 10 years.

I’ll walk you through the NZDUSD results. Holding refers to how many days in the trade (entry is on Thursday’s close). In the last 10 years, the conditions were met 28 times (including yesterday). After 1 day, there were 11 wins and 16 losses for a 39% winning %. The average win was 66 pips and the average loss 32 pips for a reward/risk ratio of 2.07. After 2 days, the win % is 46% and the reward/risk is 2.37, etc. The tests do align with a higher USD next week. 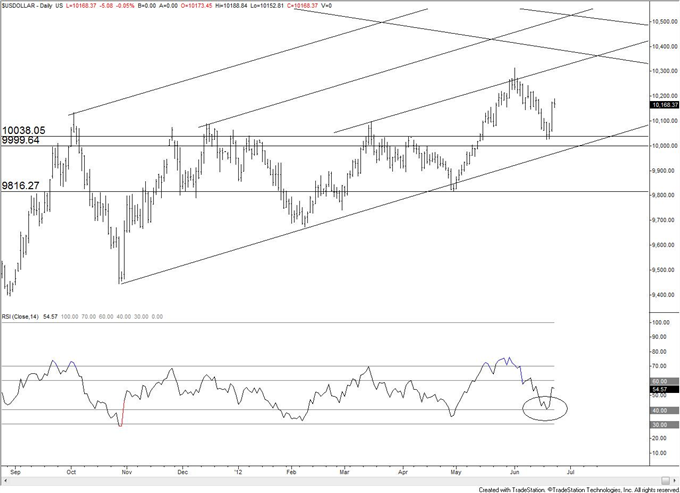 Jamie – The Dow Jones FXCM Dollar Index (Ticker: USDOLLAR) found low this week just below the April high at 10038 and 13 week moving average is at 10032. The 40 level acting as support in RSI is a bull market characteristic as well. Waves A and B of the 3 wave decline from June 1 both divide into 5 waves while the rally off of the low is and impulse. Weakness is viewed as an opportunity to get long. 10145 and 10105 are supports.

Joel – The market has been locked in a kind of consolidation since rallying to fresh 2012 highs just over 10,300 in early June. While we eventually project additional strength beyond 10,300, risks in the shorter-term are for more choppy consolidation between 10,000 and 10,300. As such, our preferred strategy is to be looking to buy dips towards 10,000. 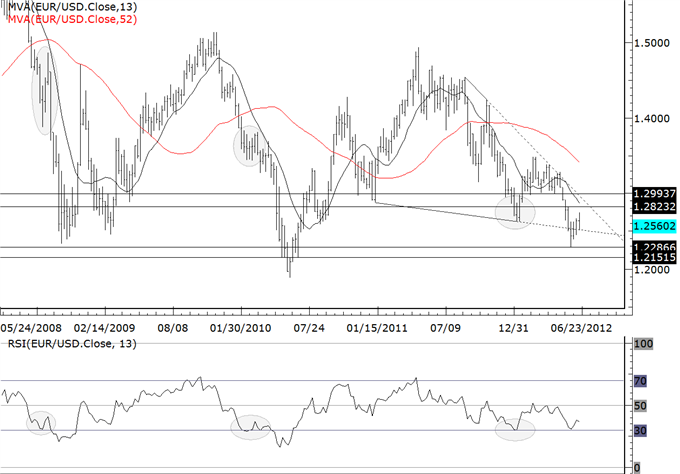 Jamie – “Weekly RSI is at a level that is consistent with a sideways/corrective market for 3-5 weeks before bearish continuation.” The EURUSD held up for 4 weeks before turning down impulsively this week. Friday’s bounce brought price into resistance but levels of interest next week are 12435 on the downside and 12630 as resistance. 12150 would be the next level of interest in the event of a break to new lows. There is nothing about the rally from 12287 to suggest that the larger trend has turned up. The overlapping advance is the model of a correction. A test of the low may not be in the works next week but expect July fireworks.

Joel – While our overall outlook remains grossly bearish, from here we still see room for short-term upside before a fresh lower top is sought out. Despite the latest pullback, the market still looks constructive in the short-term while above 1.2440. A closer look at the weekly chart still shows the pair putting in yet another weekly higher high and higher low. Nevertheless, a break back above 1.2750 will now be required to accelerate gains. Below 1.2440 negates. 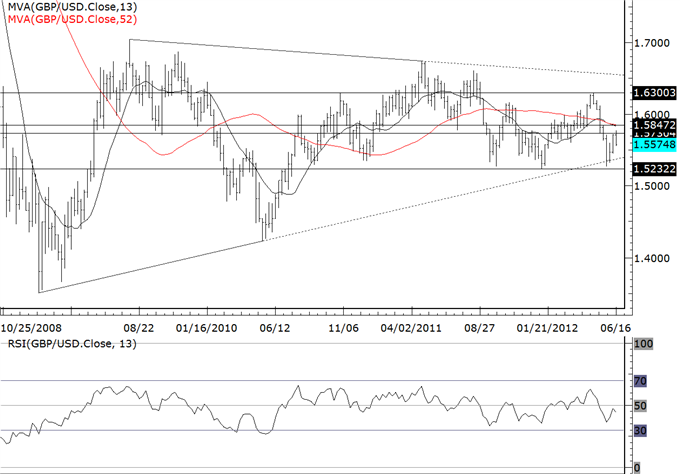 Jamie –“Like everything else, expectations are for the rally from the low to prove corrective. Early week levels are 15640 and 15735.” The GBPUSD topped on Wednesday and carved out a key reversal in the process. Like the EURUSD, the 3 wave structure of the advance from the June 1 low suggests that a top is in place and 5 waves down from 15777 confirms as much. Levels for next week are 15650/65 and 15470.

Joel – Despite some intraday pullbacks, the bullish correction since early June remains alive, and we still see room for additional upside beyond 1.5780 and towards 1.6000 over the coming days. Ultimately, any additional declines are expected to be well supported around 1.5500, while only back under 1.5450 would compromise the outlook. 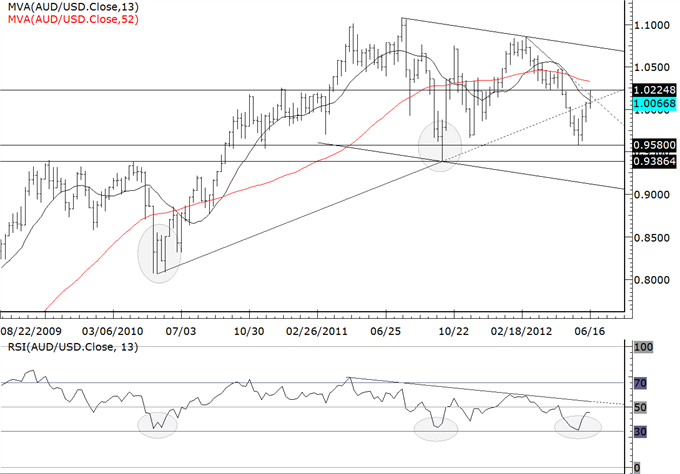 Jamie – I’d like to think that a top is in place given the level that the AUDUSD reversed from (April low, 50% retracement of decline from February high, 100% extension of rally from 9580 and 13 week average) but I’m also aware of the arduous topping process common to the AUDUSD (and NZDUSD). In any case, I am bearish even in the event of a new high. A new high would probably be minimal and downside potential is far greater. Levels for next week are 10115 and 9920, 9820.

Joel – The market has come back under some renewed pressure following an intense rally back over parity and towards 1.0250. However, at this point we are not yet ready to call for an immediate bearish resumption, and would look for any additional setbacks to be well supported above 0.9900 in favor of additional upside. Ultimately, only back below 0.9800 would give reason for concern. 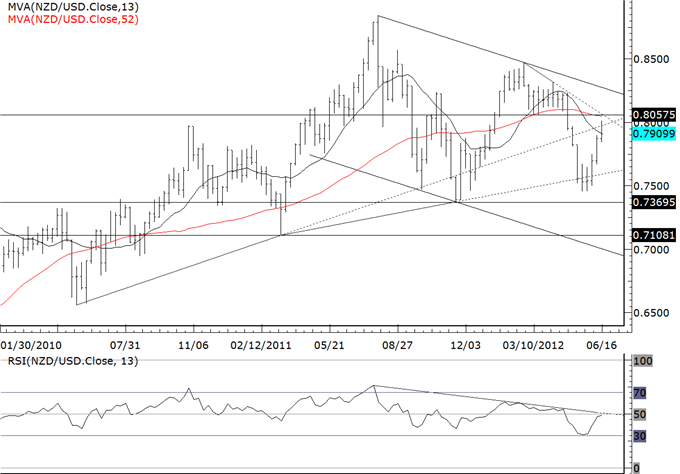 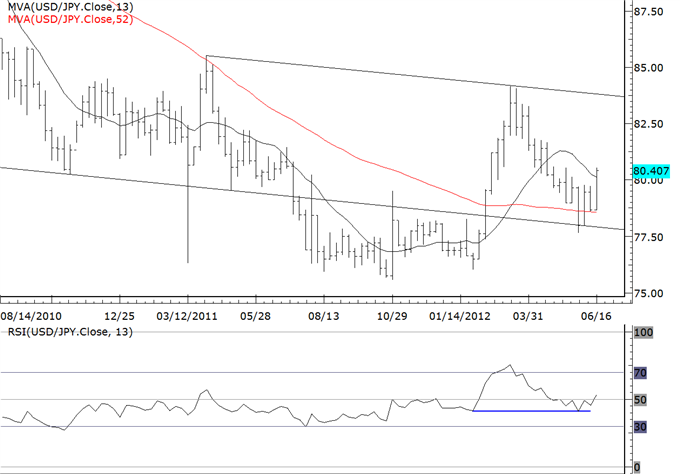 Jamie – “Bigger picture, the USDJPY is trying to put in a low above the February low. The RSI turn at 40 on the weekly is promising in that regard.” Each day brings more evidence that the USDJPY is entering a major bull phase. Price broke through the June high with authority this week and now faces resistance from the May high at 8060. A Fibonacci extension (100% of 7765-7979 / 7961) comes in at 8074. Expect trading to be a bit choppier up here for several days. Longs on dips are a favored strategy here before a potential parabolic move. Early week support is 8000 and 7965. The next objective (on a break through current levels )is 8205.

Joel – Some very constructive price action in recent sessions with the market clearing some critical short-term resistance by 79.80 and then breaking back above psychological barriers at 80.00. This now opens the door for a potential medium-term higher low in place by 77.65 ahead of the next major upside extension back towards and eventually above the 2012 highs by 84.20.