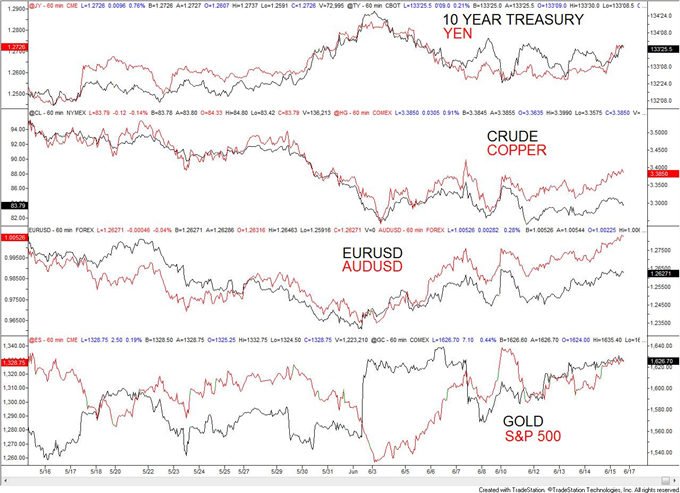 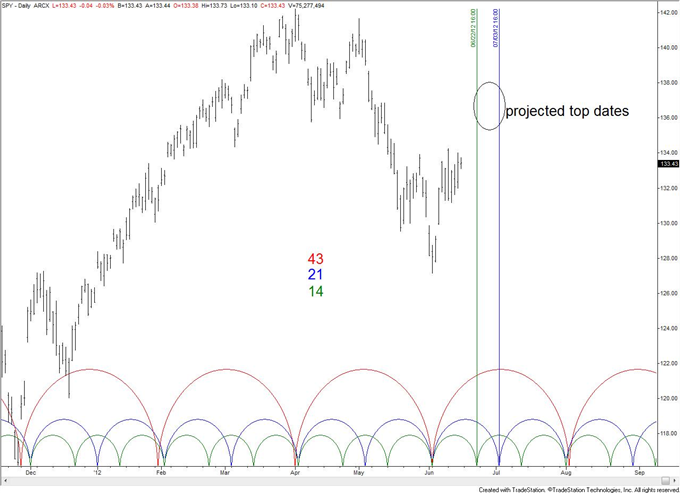 “Most of the correction (rally) is probably complete in price but not time. Slightly more than 50% of the decline has been retraced in just over a week’s time. The decline from the April high consumed 43 days. Corrective rallies that occur following 5 wave declines from significant tops tend to consume 1/3 – 1/2 of the time that the decline did. In other words, one would expect the rally from the low to take roughly 14 to 21 days. Projected from the 6/4 low, we get possible topping dates on 6/22 (Friday) and 7/3.” 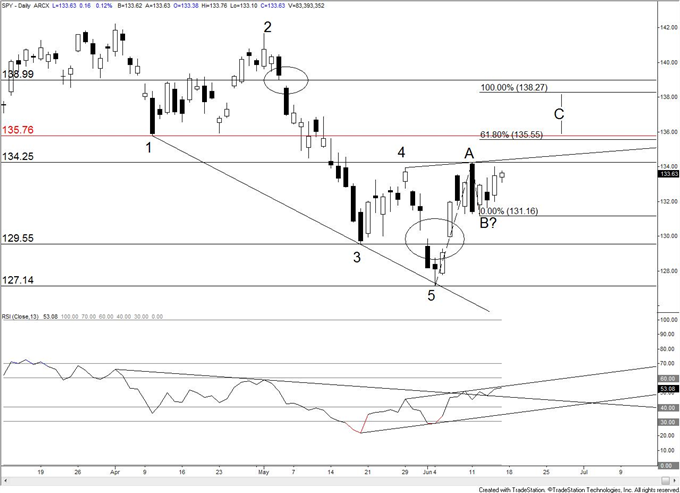 From last week: “Under the Elliott wave model, a 5 wave market move is followed by a 3 wave move. The decline from the April high is in 5 waves so we should expect for a 3 wave advance from the low. The rally from the low now probably composes the first of the expected 3 waves (wave A) and expectations are for weakness in wave B next week. Wave B might bottom near the gap left open at 129.26. The 61.8% retracement of the rally from Monday’s low is at 129.58 and the 5/21 low is 129.55. It’s interesting to note that if Thursday was the top of wave A and if wave B bottoms near the suggested level, then the rally from the low would compose 2 equal legs at the April low. The gaps on either side of the low compose an island reversal and powerful base for an eventual C wave advance. I’ve shown the SPY ETF rather than the index to highlight the gaps.”

Update: All of wave B’s weakness occurred on Monday as equities spent the rest of the week drifting towards the highs. Most minds are on what’s going to happen in the Greek elections this weekend, and for good reason, but a trader should react to the reaction rather than try and predict what’s going to happen. In the event of a negative market reaction to weekend events, a gap open below 131.16 would probably complete wave B. A positive reaction could result in an extension later next week as high as 138-139. 138.27 is the 100% extension of the rally from the low and 138.99 is the gap left from the 5/4 open. In summary, current structure favors higher prices regardless of what happens this weekend. The question is whether or not the rally resumes from the current level or from below 131.16 following a negative reaction to events over the weekend.

Euro / US Dollar with 1 Week Volatility 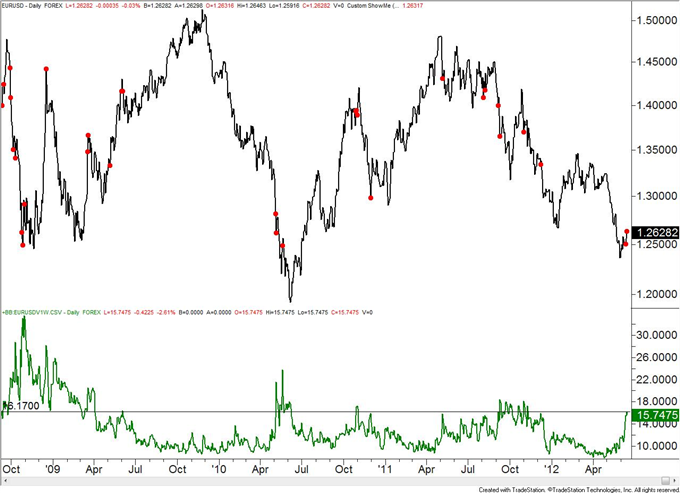 1 week EURUSD volatility has spiked to its highest level since November. Since the advent of the Euro, there have been 30 (32 including the 2 this week) days in which 1 week volatility was above 15 AND at a 20 day high (red dots). The first occurrence was in September 2008. We already know that the market is volatile so this doesn’t tell us much by itself. The value lies in getting a sense for what happens immediately following the high volatility condition. 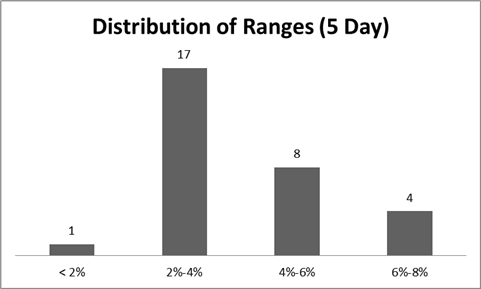 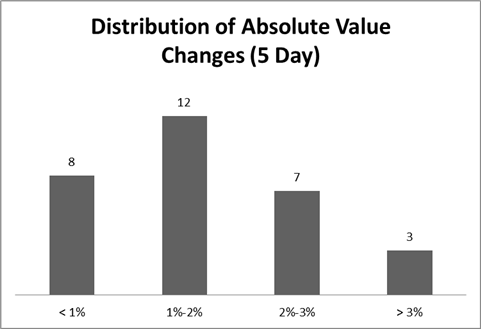 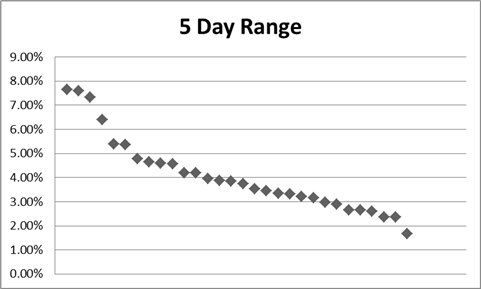 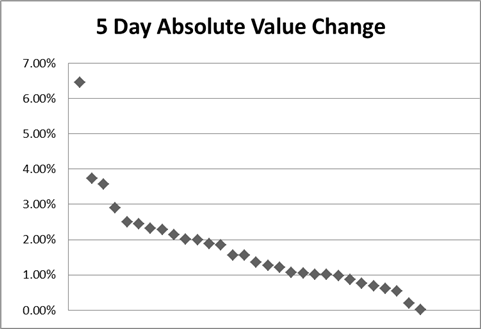 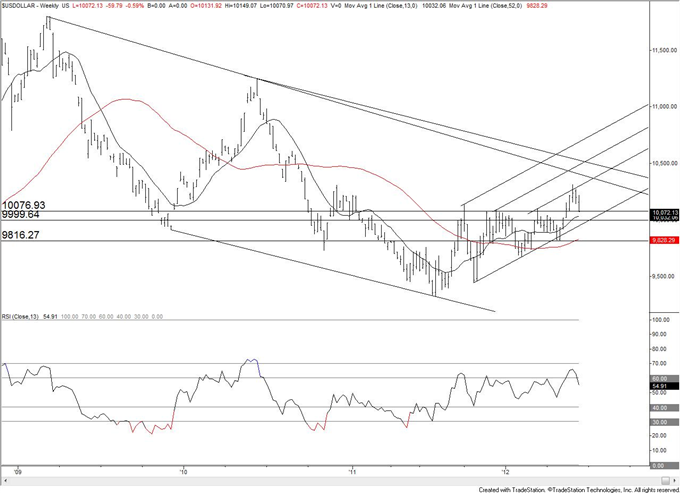 Jamie – The Dow Jones FXCM Dollar Index (Ticker: USDOLLAR) stalled at channel resistance (higher channel lines are likely to come into play later in the summer). This week’s decline is the largest since the end of January. Levels to keep in mind next week are the 50% retracement at 10064, April high at 10038 and 61.8% retracement at 10006. The 13 week moving average is at 10032. Bottom line here is that there is a cluster of supports from the current level down to 10000. Resistance next week is 10100.

Joel – The market has now taken out some major resistance by 10,100 to open the door for fresh upside and a bullish continuation over the coming weeks. Next key resistance comes in by the 10,500 area, although, with daily studies now overbought, look for opportunities to buy on dips back towards 10,000 where a fresh higher low is now sought out. 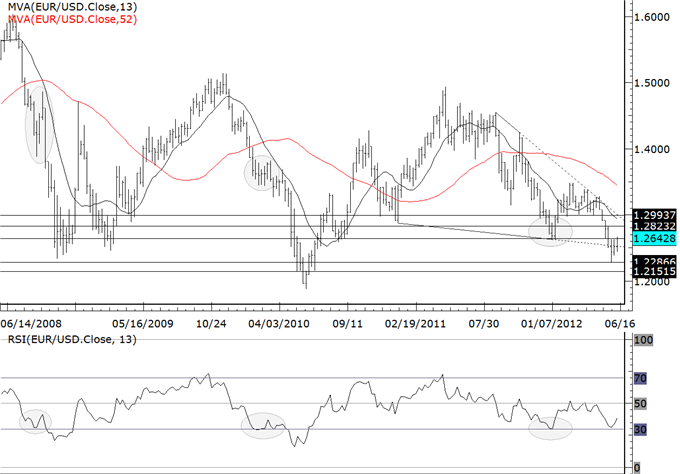 Jamie – “Weekly RSI is at a level that is consistent with a sideways/corrective market for 3-5 weeks before bearish continuation.” The EURUSD is finishing the week at its highs and just above where it opened the week. The 12825 level is of particular interest. This level is defined by the 5/21 high and 100% extension of the rally from the low. 12540/90 are early week supports.

Joel – The market is in the process of correcting from some violently oversold levels after breaking to yearly lows just under 1.2300. While our overall outlook remains grossly bearish, from here we still see room for short-term upside before a fresh lower top is sought out. Look for the latest positive weekly close to open the door for acceleration into the 1.2800-1.3000 area, where fresh offers are likely to re-emerge. Setbacks should be well supported ahead of 1.2400. 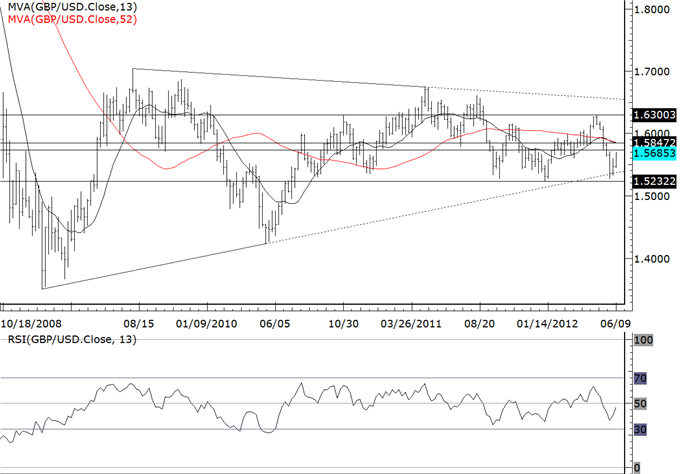 Joel – Daily studies are now correcting from oversold and from here risks seem tilted to the upside to allow for a necessary short-term corrective bounce after setbacks stalled just shy of the 2012 lows from January. Look for the latest daily close back above 1.5440 to strengthen short-term bullish outlook, with acceleration projected into the 1.5800 area where a fresh lower top will be sought out in favor of underlying bear trend resumption. Only a close back under 1.5400 delays. 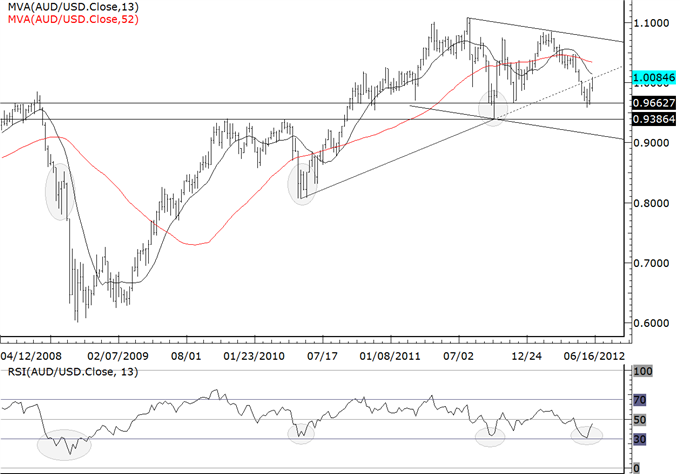 Joel – Our bearish outlook in this market remains intact and we continue to project deeper setbacks over the coming days and weeks towards the October 2011 lows by 0.9385. However, daily studies are in the process of unwinding from heavily oversold readings, and as such, we see shorter-term risks for more of a bounce towards the 1.0200 area where the next major lower top is sought out ahead of underlying bear trend resumption. 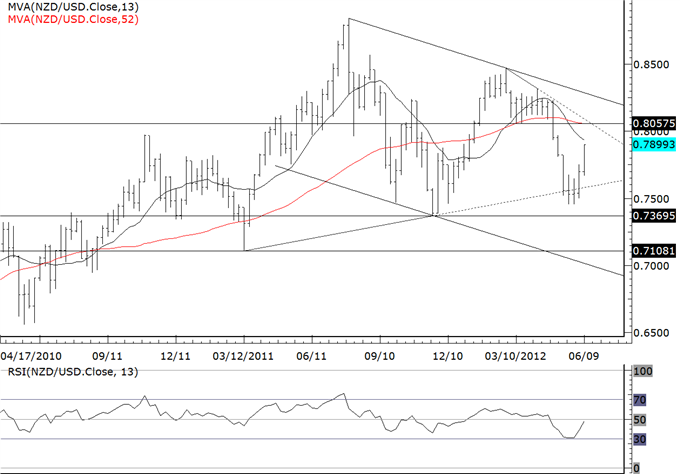 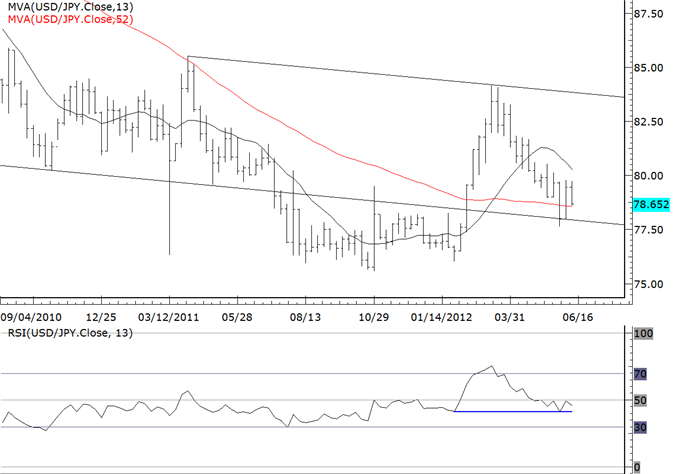 Jamie – “7930 offered little in the way of resistance but price is at a zone (7980-8030) that is heavy with former congestion. In line with the waves in risk across the board, expect a correction lower next week. Support is now 7900 and 7850. Bigger picture, the USDJPY is trying to put in a low above the February low. The RSI turn at 40 on the weekly is promising in that regard.” Currently at 7850, look for support early next week.

Joel – The latest setbacks have been rather intense, with the market collapsing through the 200-Day SMA before finally finding support by 77.65. We have since seen attempts at recovery and we contend that the market should continue to break higher, with sights ultimately set on a retest and break of the 2012 highs by 84.20 further up. However, at this point, we will need to see a break and close back above 80.00 to officially alleviate downside pressures and reaffirm bullish outlook.