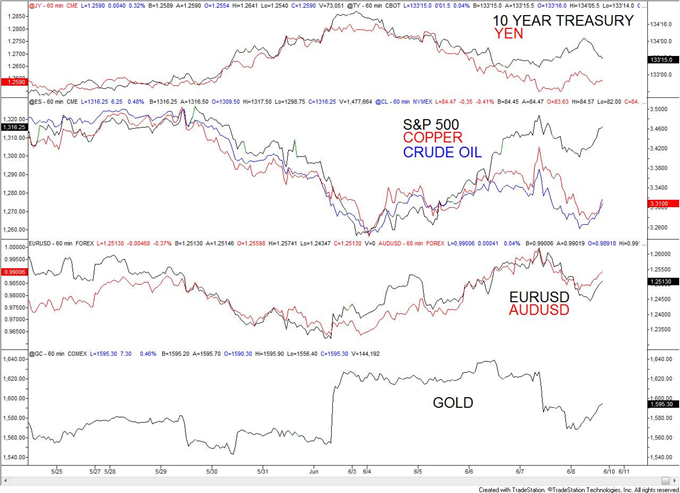 US Dollar Finishes Wild Week at Support with Stocks at Resistance

What a difference a week makes. Risk was plunging at the end last week but extreme volumes on futures contracts indicated capitulation and daily key reversals early in the month increased conviction in the call for a reversal. So where from here? Risk has rebounded into resistance (specifically EURUSD 12625, AUDUSD 10000, NZDUSD 7750, USDOLLAR 10150, GBPUSD 15600, and crude 87) which has me thinking that the rally has peaked for a few days or will do so after one final push (maybe after a weekend bailout?). Even so, the weight of evidence suggests that risk will at worst trade sideways for June (see SPY chart below).

A sideways market may take hold next week. We are at resistance across the board now but the heavy volume we saw last Friday indicates that there will probably be a lot of shorts at bad prices willing to cover if we approach the lows, which would support markets. I’m bearish now but would be less bearish on a drop from these levels with the understanding that another bull leg later in June may be required to relieve the market of extreme bearish sentiment that was registered at the low. Weekly RSI considerations are telling at the current juncture as well (see charts). 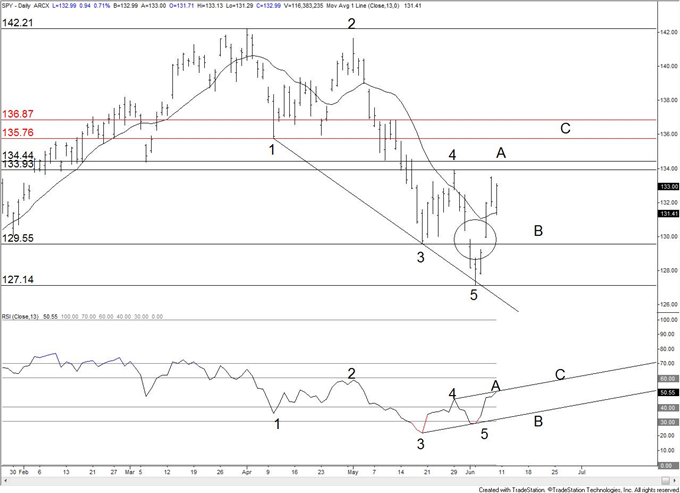 Under the Elliott wave model, a 5 wave market move is followed by a 3 wave move. The decline from the April high is in 5 waves so we should expect for a 3 wave advance from the low. The rally from the low now probably composes the first of the expected 3 waves (wave A) and expectations are for weakness in wave B next week. Whether that begins from the current level or a slightly higher level (note the resistance on the chart above) is unclear. Wave B might bottom near the gap left open at 129.26. The 61.8% retracement of the rally from Monday’s low is at 129.58 and the 5/21 low is 129.55. It’s interesting to note that if Thursday was the top of wave A and if wave B bottoms near the suggested level, then the rally from the low would compose 2 equal legs at the April low (1.3576). The gaps on either side of the low compose an island reversal and powerful base for an eventual C wave advance. I’ve shown the SPY ETF rather than the index because I wanted to highlight the gaps but corresponding index levels are noted.

How do use this information to trade FX? You’ve already seen that everything is correlated so be bearish at resistance and bullish at support. We are at resistance now. There are many candidates to trade, including any combination of EUR, AUD / USD, JPY. AUDJPY (or NZDJPY) is the highest beta play (most risk). 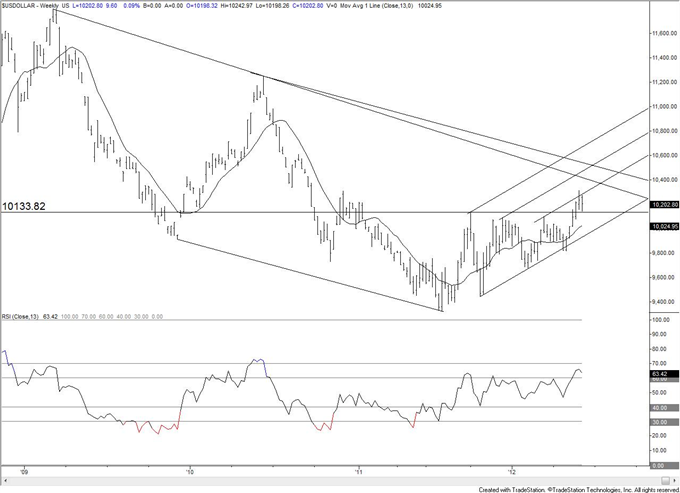 Jamie – The Dow Jones FXCM Dollar Index (Ticker: USDOLLAR) stalled at channel resistance (higher channel lines are likely to come into play later in the summer). Support is defined by the October high at 10134 and March high at 10097. These levels correspond to the congestion zone that began May 16th as well. In other words, Thursday’s low rebounded from support. Taking my cue from the SPY analysis, we may be in for sideways trading next week. Early week levels are 10175 and 10260/70. 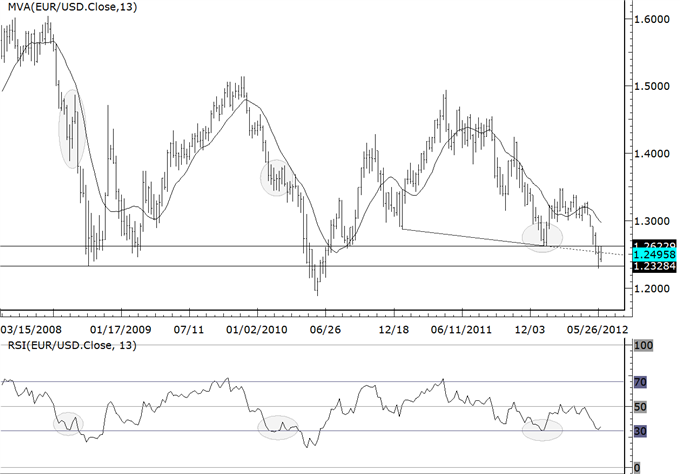 Jamie – “Today’s reversal signals a short term exhaustion and beginning of a corrective move higher. Interim resistance is now 12500 although 12640-12715 would be ideal to short into if reached.” We got to 12625 before reversing yesterday. Taking my cue from the SPY analysis, we may be in for sideways trading next week. Early week levels are 12540 and 12380/12400. Weekly RSI is at a level that is consistent with a sideways/corrective market for 3-5 weeks before bearish continuation. 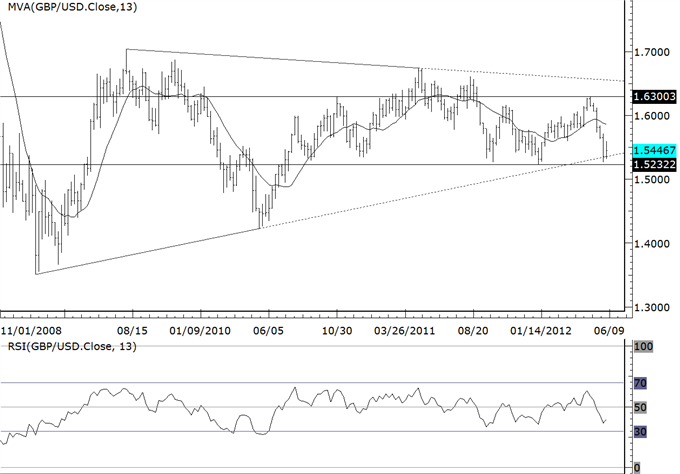 Jamie –The GBPUSD has bounced from the trendline that extends off of the 2009 and 2010 lows. Like everything else, expectations are for the rally from the low to prove corrective. Early week levels are 15515 and 15360/90. More important resistance to keep in mind as June progresses is 15630. 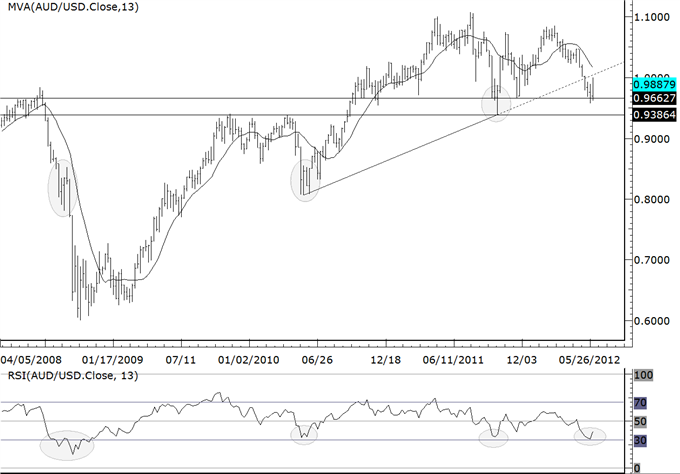 Jamie – The AUDUSD reversed at parity after bottoming at 9580 last Friday. That’s a 420 pip rally and may compose the bulk if not all of the correction (specifically a 4th wave) as the high is at channel resistance. Early week levels are 10020, 9800, and 9725. Weekly RSI is at a level consistent with at least consolidation for several weeks (2008 and 2010). A v-shaped bottom formed in 2011 but the technical situation was quite different (much higher volatility in fall of 2011 which was conducive to a longer standing low). I’m bearish at these levels. 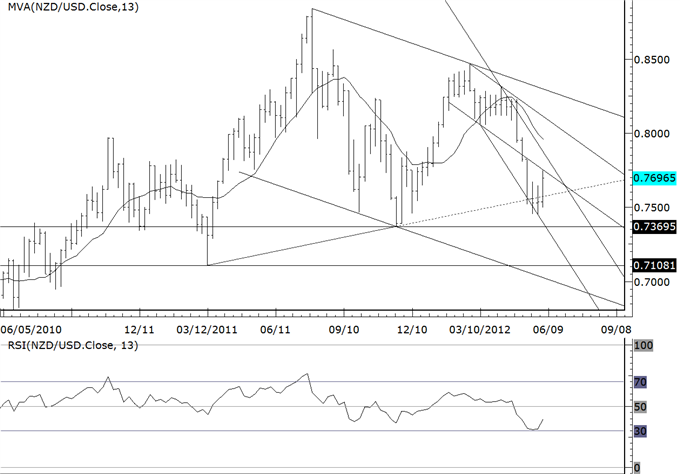 Jamie – The NZDUSD has bounced from the December low and neckline of a well-defined multiyear head and shoulders top. Price reversed just shy of its parallel line but did reverse close to its former base channel support (now resistance). Resistance above 7753 is 7770-7810. 7575 is of interest early in the week. 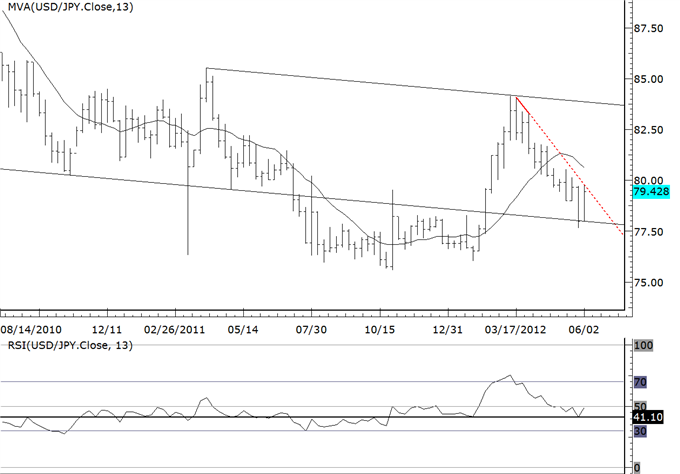 Jamie – 7930 offered little in the way of resistance but price is at a zone (7980-8030) that is heavy with former congestion. In line with the waves in risk across the board, expect a correction lower next week. Support is now 7900 and 7850. Bigger picture, the USDJPY is trying to put in a low above the February low. The RSI turn at 40 on the weekly is promising in that regard.