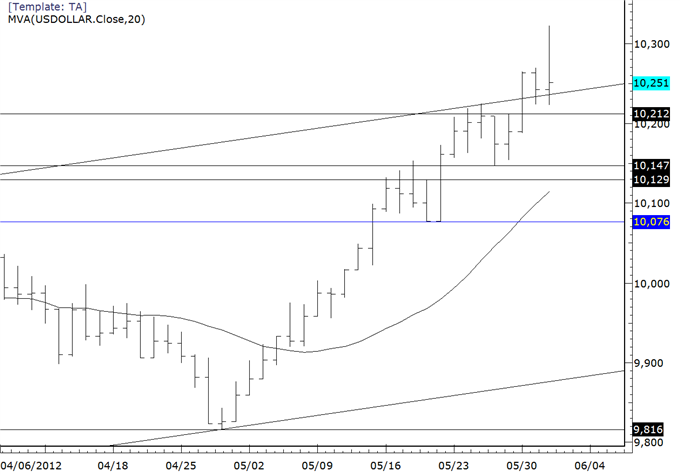 US Dollar Roars and Reverses After Jobs Data

In previous months, these pages have warned of slowing global growth and cited crude as the leading indicator. Crude plummeted nearly 18% in May compared with just a little over a 6% decline in the S&P 500. Reitterating the stance that crude is the leader (the ‘tell’ if you will) in the next wave of develeveraging, equities probably have much more downside in the coming months. This means of course more upside in the USD but probably not before a pullback (more on that below). Let’s not overthink this either; the NZD was the biggest loser in May against the USD (other than the MXN and SEK). My focus is likely to remain on NZD and the higher yielding AUD in June. It’s easy to get lost amidst the news and volatility if one allows it to happen…so don’t. Keep it simple; identify key levels and know what you’ll do when those levels are reached.

Today’s action may mark the beginning of a countertrend move. Hopefully it does so that we can buy USD at better prices. As always, early month action is important as price extremes are most likely to occur in the first few days of the month (especially the first day). With this in mind, I’m envisioning a sharp correction in price that lasts for perhaps a week.

Jamie – The Dow Jones FXCM Dollar Index (Ticker: USDOLLAR) popped off today to tag 103000 before reversing sharply. The pullback has been elusive but a new month offers a new perspective and pivot (in time) from which to trade. 10220 is initial support. 10129-10147 would ultimately be the ideal level to go long with a stop under 10076. In the event that a pullback does not materialize then I’ll adjust levels accordingly. 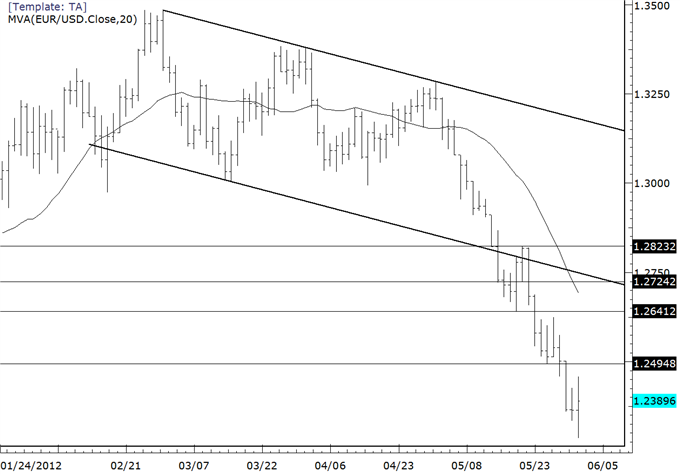 Jamie – The EURUSD crashed through 12300 after the NFP release before recovering sharply. The next support isn’t until 12150 but ideally today’s reversal signals a short term exhaustion and beginning of a corrective move higher. Interim resistance is now 12500 although 12640-12715 would be ideal to short into if reached. 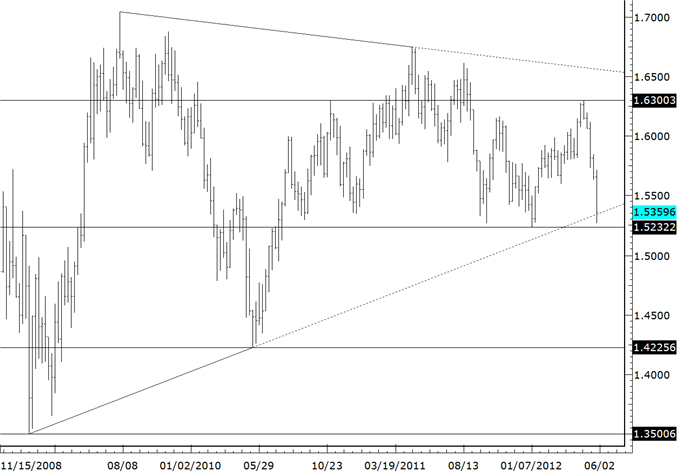 Jamie –Cable has absolutely tanked this week and actually registered its largest monthly decline since October 2008 at 5.11%. This week’s decline is the largest since the week that ended 11/25/11. I’ve gotten recent action completely wrong as I was expecting a bounce from BEFORE 15600 to get short closer to 15850. There was no bounce of course (the GBPUSD didn’t even reach its 10 day average) and the GBPUSD has taken out nearly all of 2012’s gains and reached the trendline that extends off of the 2009 and 2010 lows. The January low is at 15233. Maybe a drop below there is needed before we get a larger recovery. Resistance would then become 15460-15530 and then 15630-15720. 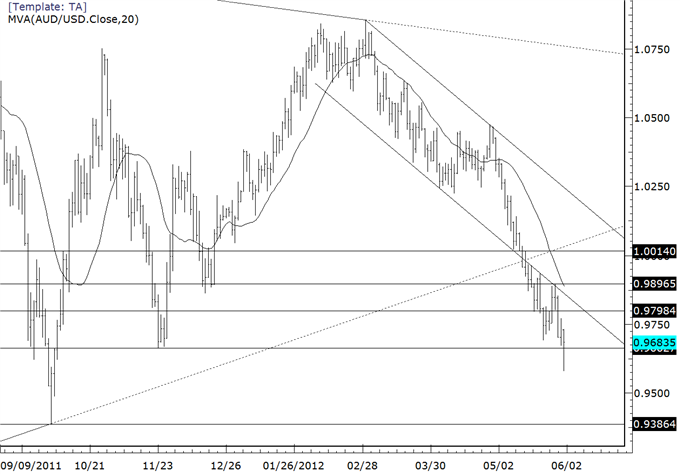 Jamie – The AUDUSD traded below the November low today and to its lowest level since October 2011. The goal for June should be to align with the larger bear trend, which is difficult to do psychologically given the extent of the decline. 9800 and 9900/50 are resistance. We’ll deal with targets when we get there but a downward sloping channel is at about 9115 this month. 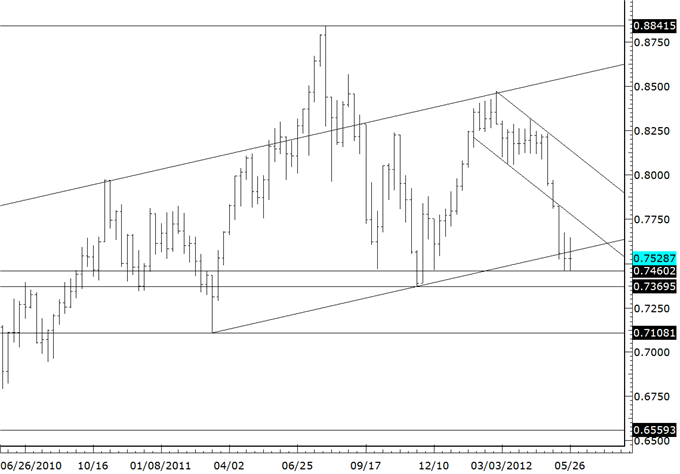 Jamie – The NZDUSD once again tested the December low and traded into the gap that was left open from 11/28/11 before recovering. The goal for June should be to align with the larger bear trend, which is difficult to do psychologically given the extent of the decline. 7675-7720 is resistance. We’ll deal with targets when we get there but it’s worth noting that the NZDUSD is slipping below the long term head and shoulders neckline. 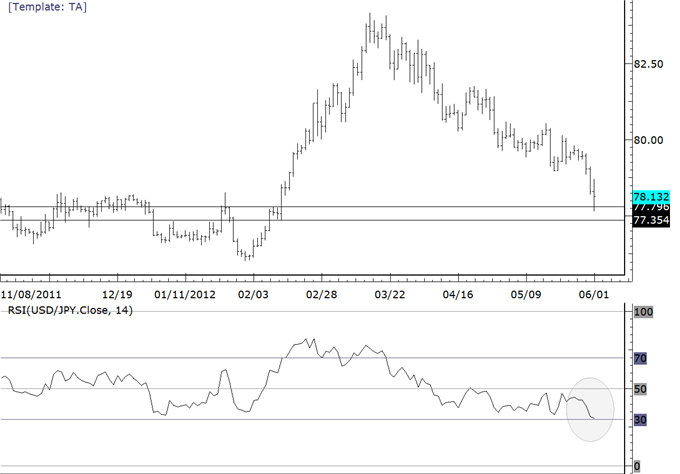 Jamie – The USDJPY traded into mid-February congestion today before rebounding sharply (on what may have been intervention). Again, the time of month (early) combined with intraday action (reversal) offers an opportunity. I’ve highlighted daily RSI as well, which is nearing 30. Typically, this level (30) will hold if a larger bull is underway (from the record lows in this case).