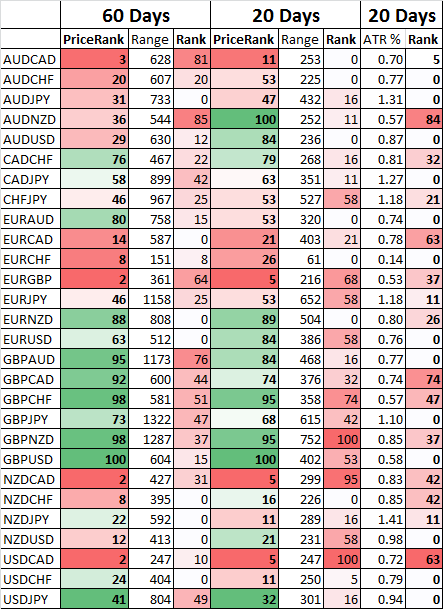 Dollar Breaks Down; Canadian Dollar of Interest across the Board

I’ve been here many times before; plagued by false breaks in the direction of the US Dollar only to see markets move quickly towards USD weakness and continue in that direction for several big figures, and usually farther than most think possible. In the current environment of central bank meddling, the USD bottoms at the end of credit inflation and the USD tops at the end of credit deflation. The underlying emotions fundamental to these turns are hope (USD bottoms/stocks top) and fear (USD tops/stocks bottom). Fear being more powerful than hope, it is easier to see and feel a USD top than a USD bottom. A bottoming process in the US Dollar (topping process in credit inflation) is underway. The keyword is process, which connotes the passage of time. Being too early is as bad as being too late if you are trading FX. Keep this in mind as you study the charts. –Jamie Saettele, CMT 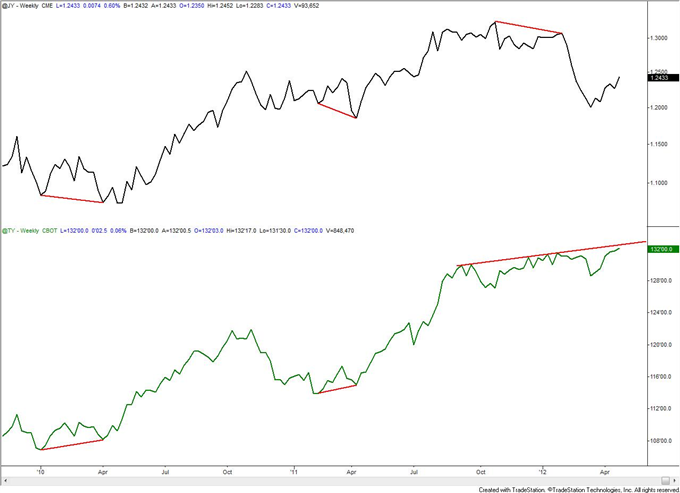 Jamie – We’ve been waiting for a divergence between the treasury and Yen markets to time the next long USDJPY trade. The divergence happened this week. Considering the USDOLLAR’s deteriorating technical condition, other Yen crosses are probably better bets in the immediate future. 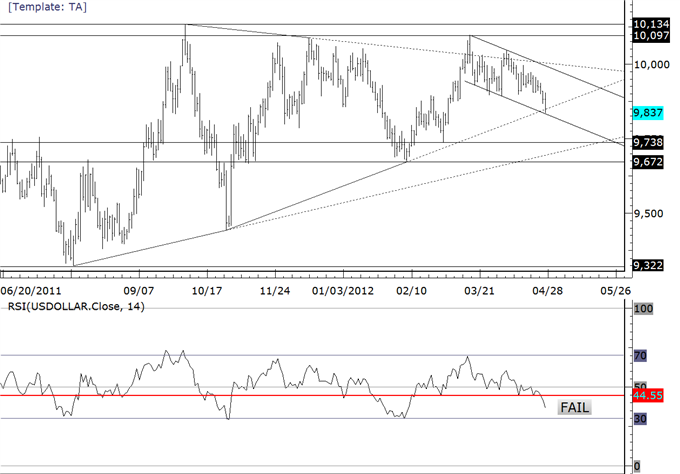 Jamie – The technical condition of the Dow Jones FXCM Dollar Index (Ticker: USDOLLAR) is deteriorating. Price is breaking the trendline that extends off of the October and February lows and RSI has broken its support at 50. The next levels of interest are the late February low at 9740 and trendline that extends off of the August 2011 and October 2011 lows. 9845/60 is resistance. 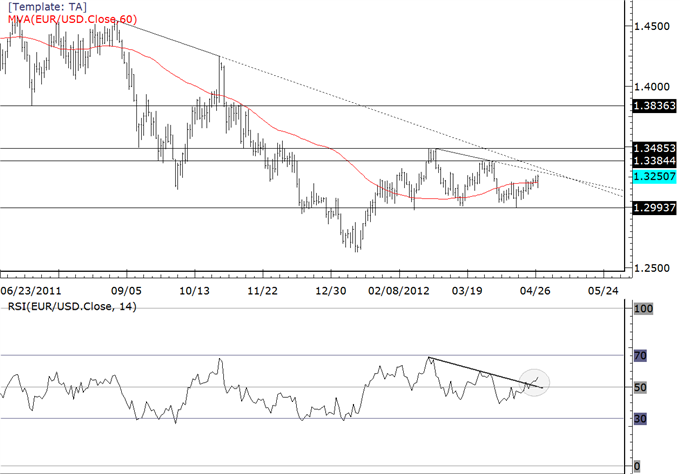 Jamie – After holding 13000 3 times since mid-February, one would be foolish not to acknowledge the potential for a bullish resolution to the multi-month range, which would probably carry to the mid 13800s. I mentioned this morning that the EURUSD has respected a roughly 20 day topping cycle since November. That 20 day window is closing. If a top doesn’t form early next week then a bullish resolution is likely. 13210/30 is early week support.

Joel – Overall, the market remains locked in a very tight directionless, choppy consolidation. Ultimately a break back above 1.3500 or below 1.3000 will be required for clearer directional bias. At this point, we favor selling rallies just over 1.3300, with the level offering a confluence of resistance in the form of a round figure, upper Bollinger, 78.6% fib retrace of the March-April move, and falling trend-line resistance off of the yearly highs. 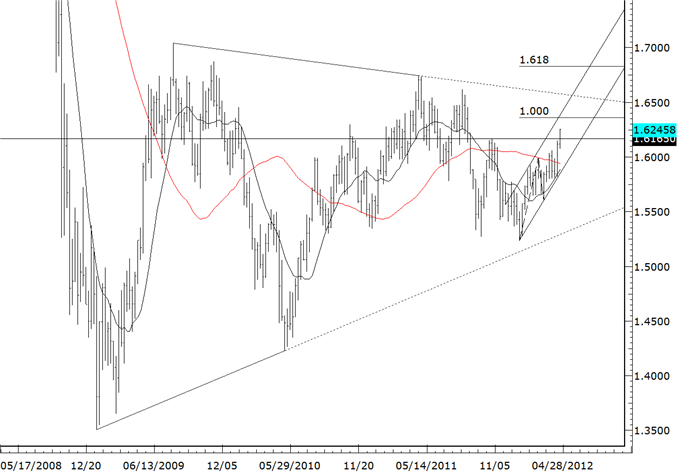 Joel – Although the market had been very well bid in recent sessions, the rally looks like it might finally be stalling out in favor of a bearish resumption, after gains stalled just over 1.6200. Look for a daily close back below 1.6150 to confirm and accelerate into the 1.5800 area. Ultimately, only a daily close above 1.6250 delays and gives reason for pause. 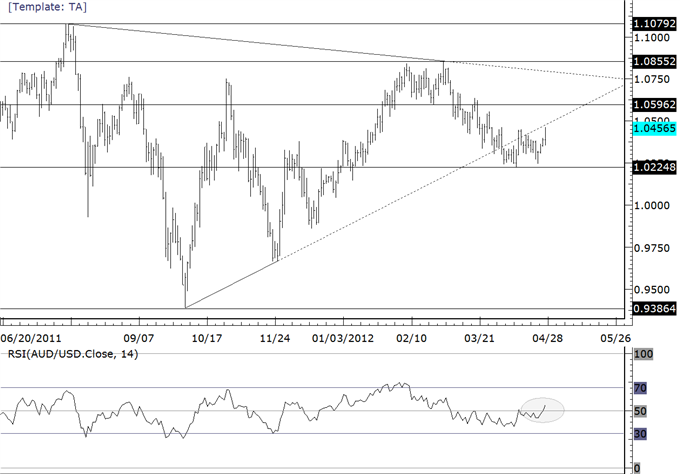 Joel – Our bearish outlook in this market is being reaffirmed with the latest pullback from the mid-1.0400’s and we continue to project deeper setbacks over the coming days and weeks back below parity. A fresh lower top now looks to be carving by 1.0465 but only back above 1.0640 would delay and give reason for concern. From here, look for the latest break and close back below 1.0300 to open the next downside extension towards 1.0000 over the coming sessions. 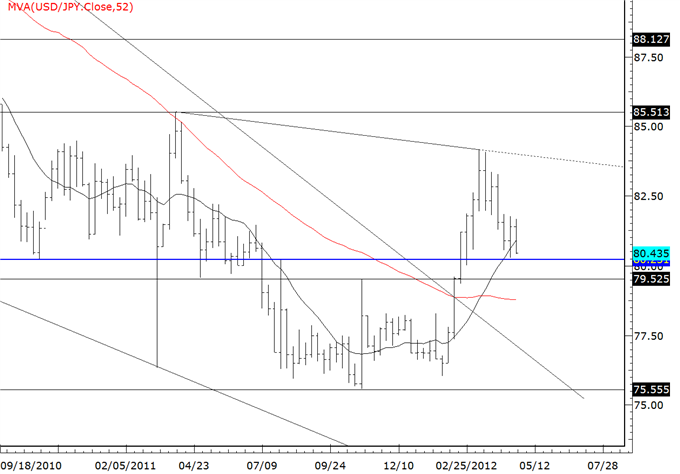 Jamie – The USDJPY has retraced nearly half of its advance from the February low. 50% retracements are often good levels to join the larger trend. RSI action on the daily is bullish. Extremely overbought readings are what you WANT to see in a bull market. Another characteristic of a bull market is that RSI will not dip below 30. The 50% retracement of the 7602-8417 rally is at 8010 and the October intervention high is at 7953. A dip into these levels would provide an optimal entry for bulls. 8070-8100 is early week resistance. Noting the technical breakdown in the USDOLLAR, I’d rather trade CADJPY.

Joel – The latest pullback from the 2012, 84.20 highs is viewed as corrective and it looks as though the market has finally found some solid support ahead of 80.00. The setbacks have stalled by the top of the daily and weekly Ichimoku clouds and we look for the formation of a fresh medium-term higher low somewhere around 80.00 ahead of the next major upside extension back towards and eventually through 84.20. Overall, this is a market that has undergone a major structural shift in recent months and we now see the pair in the early stages of a longer-term up-trend. Ultimately, only a weekly close back under 78.00 would negate. Any dips towards 80.00 should therefore be used as formidable buy opportunities. 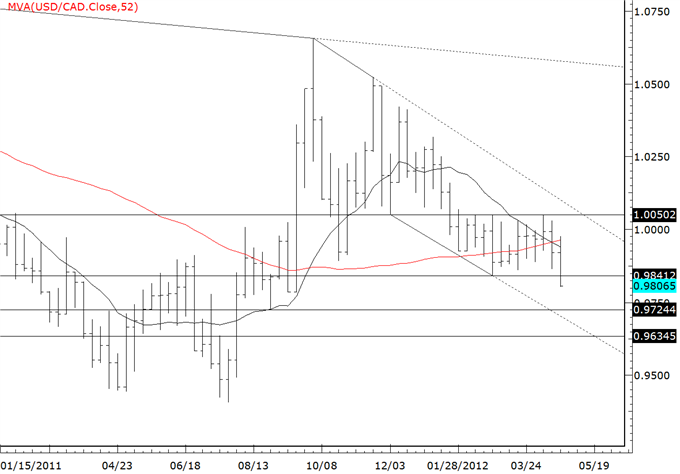 Jamie – “My best guess is that sideways trade in recent months composes a triangle. In this case, the triangle is bearish and a terminal thrust below 9841 would complete a bearish cycle.” This week’s action constitutes a valid breakout and the measured objective is 9630 (9840-width of range). 9860, 9885, and 9930 are resistance and I favor shorts into this range with a stop above 9980 to play the breakdown.

Joel – Our constructive outlook remains intact despite the latest interday pullback with the market largely locked in a medium-term consolidation ahead of what we believe will be an eventual retest of the key October highs by 1.0660. Look for any declines to continue to be well supported on a weekly close basis above 0.9800, while a daily close back above 1.0050 will help to reaffirm.