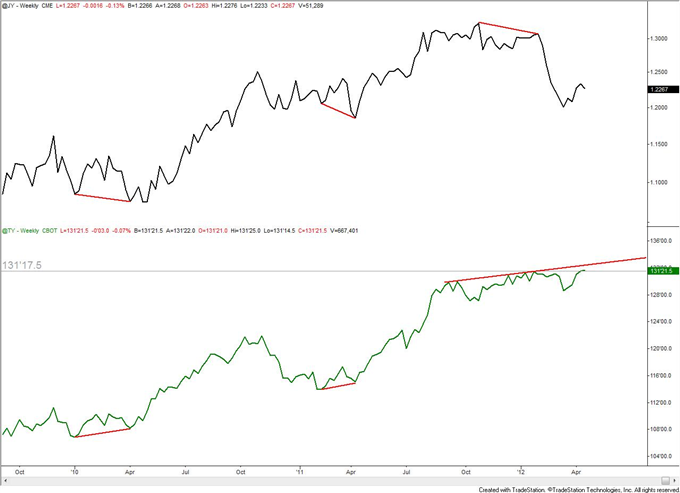 US Dollar - Put Up or Shut Up

-PriceRank is the percentile rank of the last daily close compared most recent 250, 60 and 20 daily closes (100=highest close and 0 = lowest close)

*The following 4 charts are updated from last week. It’s important to keep these ideas and their implications fresh in our minds.

Jamie – A new high in the 10 year (the entire treasury complex) is most likely not going to be coincident with a new high in Yen (new low in USDJPY). This divergence will help in timing the next USDJPY long (more on USDJPY pattern below). There is a new weekly closing high right now but the intraday high (1/31 high) is 132’02. 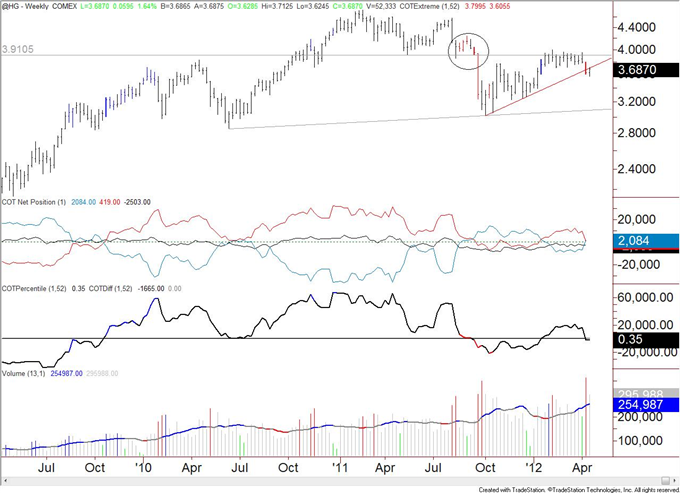 Jamie – Reported speculative positions flipped to net short 2 weeks ago for the first time since September 2011. The previous flip to net short was in July 2008. The financial crisis ensued. Copper is often referred to as “Dr. Copper” as its fluctuations are indicative of global economic strength. A 2 year topping pattern warns that another crisis is around the corner (China??). 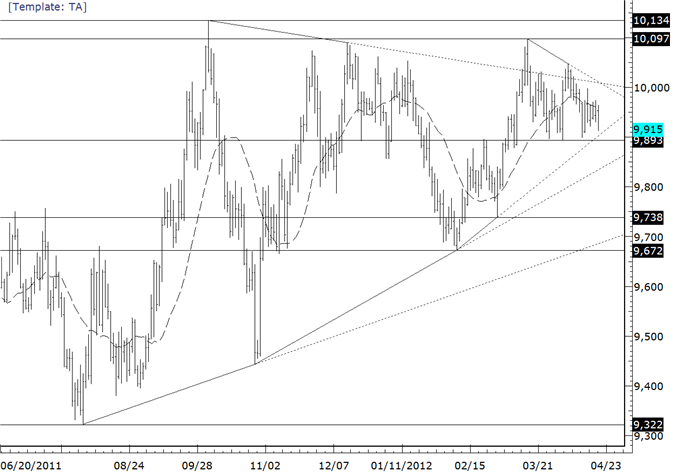 Jamie – All you need to know right now about the Dow Jones FXCM Dollar Index (Ticker: USDOLLAR) is that 9893 defines the trend (above is bullish and below is bearish). This thing is coiled and primed to explode. A drop below 9893 would negate the bullish bias and shift focus to the trendline that extends off of the February lows in the mid 9800s. 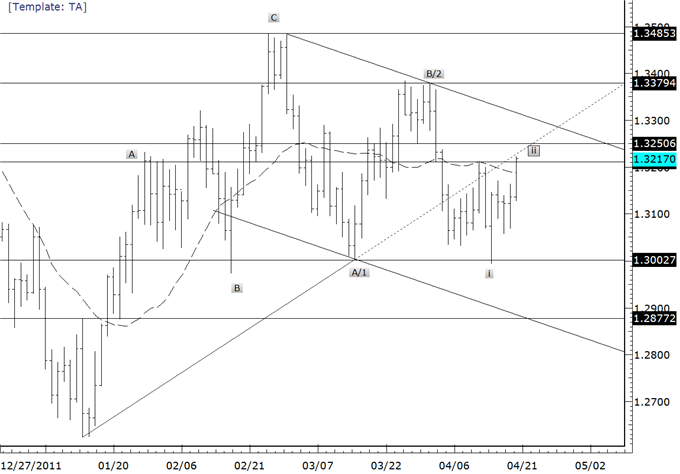 Jamie – Look lower as long as price is below the April high of 13379. Watch the channel closely as a drop below would be a ‘tell’ that the decline from 13379 is a 3rd wave rather than a C wave. On the other hand, a rebound from that level (or spike below and recovery) would favor a C wave interpretation. The end of week rally is probably a last gasp before reality sets in for the EURUSD. Resistance is strong at the current level from former pivots and the underside of former trendline support.

Joel – The latest round of setbacks have stalled ahead of some key multi-week support by 1.3000 and from here we still can not rule out risks for additional consolidation above 1.3000, before considering bearish resumption. Ultimately, any rallies towards 1.3300 should be well capped, while a break and daily close back under 1.3000 would accelerate declines to the early 2012 lows at 1.2660. 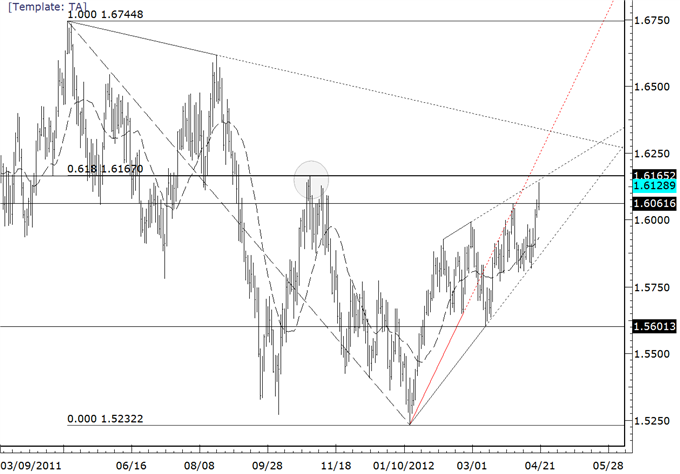 Jamie –I’ve been very wrong on the GBPUSD as it continues to march to its own beat. The rallies have been intermittent, leading to false bullish breakouts. False breakouts are often good candidates to fade, but continued false breakouts are diabolical. In any case, resistance is expected from the October 2011 high at 16165 (reinforced by trendline resistance). This week’s range is considered a ‘large range’ (largest in 13 weeks). Previous ‘large ranges’ have indicated exhaustion of the underlying move.

Joel – The recent break back above 1.6000 now opens the door for fresh upside towards the October 2011 peak at 1.6150. However, any additional gains beyond 1.6150 should prove hard to come by, and we once again see risks for a bearish reversal in favor of renewed weakness back down towards key support by 1.5800. A break and close below 1.5800 will then accelerate declines. Ultimately, only a weekly close above 1.6150 would negate underlying bearish bias. 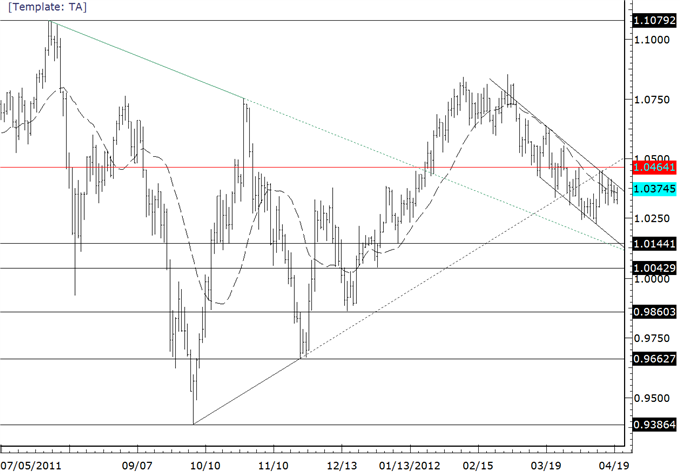 Jamie – The AUDUSD is stationary right now (this week’s range was the smallest since February 2007) and there is no change to recent commentary. “From a risk standpoint, 10464 is the bearish line in the sand for me. Exceeding that level would shift focus to former supports at 10509 and 10597.” The recent advance failed at the underside of former trendline support and channel resistance. 10145-10386 is the opening range for the year (first 2 weeks) and a break of the early year range would open up the floodgates towards 9860 and 9660. CPI on Monday should spark volatility.

Joel – Our bearish outlook in this market is being reaffirmed with the latest pullback from the mid-1.0400’s and we continue to project deeper setbacks over the coming days and weeks back below parity. A fresh lower top now looks to be carving by 1.0465 but only back above 1.0640 would delay and give reason for concern. From here, look for a break and close back below 1.0300 to open the next downside extension towards 1.0000 over the coming sessions. 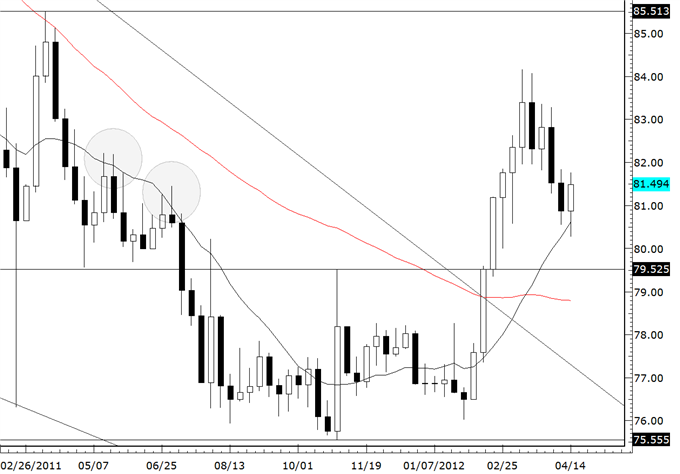 Jamie – The USDJPY faces resistance from the 20 day average and short term trendline resistance at 8180-8200 (4/10 high is also at 8185 and series of former lows from March and April is in the vicinity). While I am of the persuasion that the longer term has turned higher, I remain on the lookout for a new high in the 10 year in order to create divergence that will time the next USDJPY long. What’s more, equities appear vulnerable and a broad sell off in risk would likely correspond to weakness in Yen crosses. At this point, late April (next week) / early May is my best guess regarding the timing of longs. All Yen traders should be aware of the Bank of Japan rate decision on Thursday.

Joel – Our bearish outlook in this market is being reaffirmed with the latest pullback from the mid-1.0400’s and we continue to project deeper setbacks over the coming days and weeks back below parity. A fresh lower top now looks to be carving by 1.0465 but only back above 1.0640 would delay and give reason for concern. From here, look for a break and close back below 1.0300 to open the next downside extension towards 1.0000 over the coming sessions. 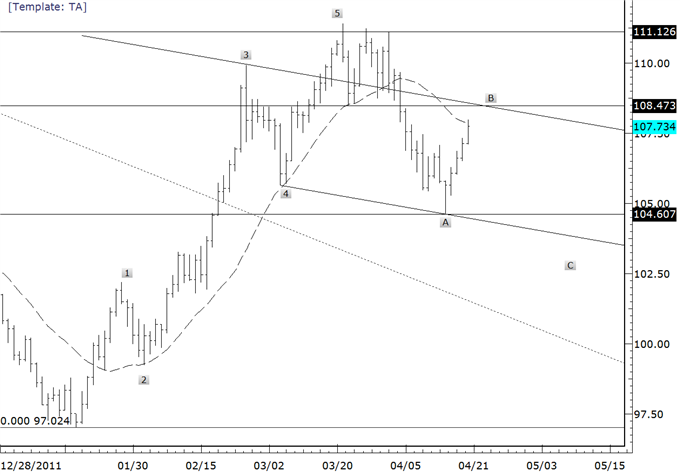 Jamie – Combine the EURUSD and USDJPY analysis and you get an idea of what might happen in EURJPY. In this case, I’m looking lower and probably sharply lower in the coming weeks towards 10461. Currently testing a downward sloping 20 day average, additional resistance comes in at former support at 10847. Charts tell a story and the charts of the euro crosses suggest a bearish market reaction to the issues currently plaguing Europe. That said, the long term trend in Yen crosses has likely turned higher (see USDJPY). The conflict has me looking elsewhere for trades.

Joel – The corrective pullback from the March 111.40 highs looks to have finally found solid support in the 105.00 area and from here we look for the formation of a medium-term higher low in favor of the next upside extension, eventually back above 111.40. Ultimately, only a weekly close below 105.00 would negate and give reason for concern. 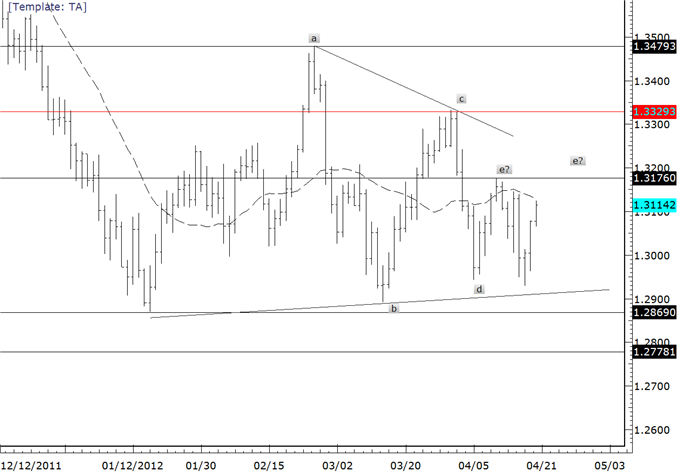 S&P 500, Nasdaq, Dow Jones Forecast for the Week Ahead
Advertisement