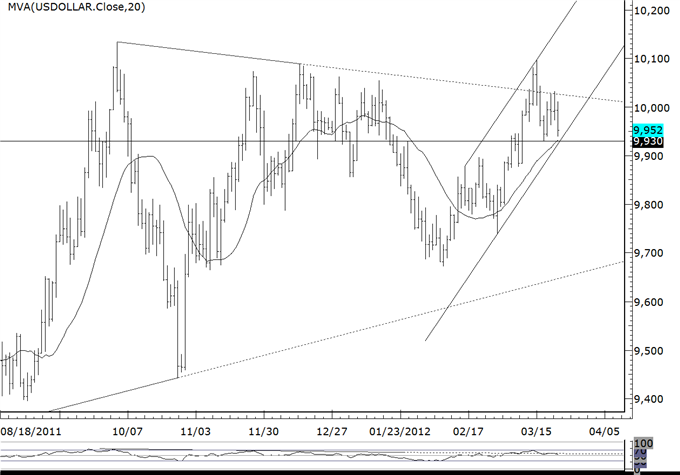 Expect Volatility in Yen to Continue Next Week

Jamie – The Dow Jones FXCM Dollar Index (Ticker: USDOLLAR) continues to threaten and fail at the resistance line that extends off of the October and December highs. A break above would signal completion of the consolidation since August (nearly 8 months) and a significant breakout. The weak end to this week’s action may be a trap. Support is strong just below the current level from the 20 day average, channel and weekly low at 9930. Reward/risk is favorable for bulls. 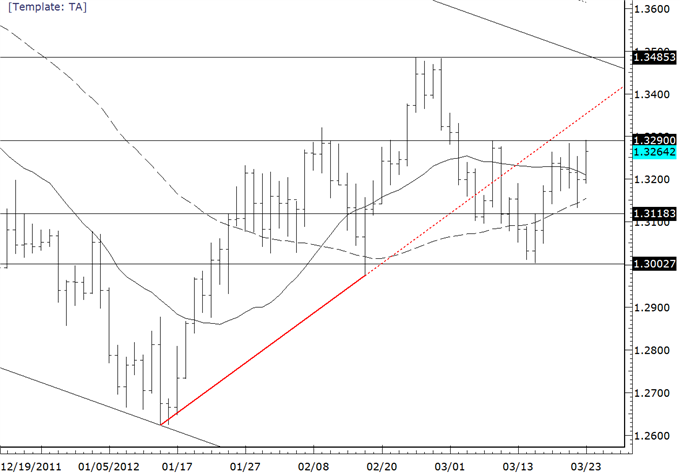 Joel – The market has been well supported on the latest dip towards key support at 1.2975 and the subsequent bounce back above 1.3100 delays bearish prospects and opens the door for additional consolidation over the coming days. The key levels to watch above and below come in by 1.3315 and 1.2975 respectively and a break and close above or below will be required for clearer directional bias. In the interim we remain sidelined. 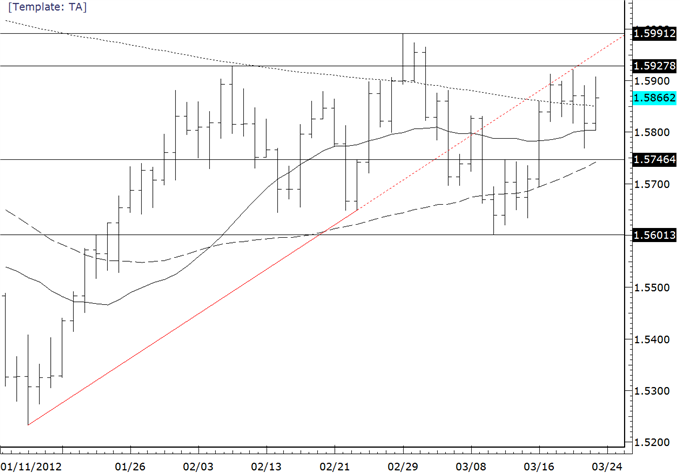 Jamie –The GBPUSD rally from the 3/12 low (15602) has stalled at the 200 day average / 2/8 high. Bulls have failed to penetrate (for more than a few days) the 200 day average 3 times in the last 2 months, which is a warning that the next large move is down. Throw in the 3 wave rally from the January low and a strong bearish case can be made from current levels. Near term focus remains on 15750 as long as price is below 15990.

Joel – The market has been mostly confined to trade between the 100 and 200-Day SMAs since early February and until we see a clear break on either end, we will continue to see some choppy range trade. Key levels to watch above and below come in by 1.6000 and 1.5600 respectively and we will wait for a break on either end to establish a clearer directional bias. 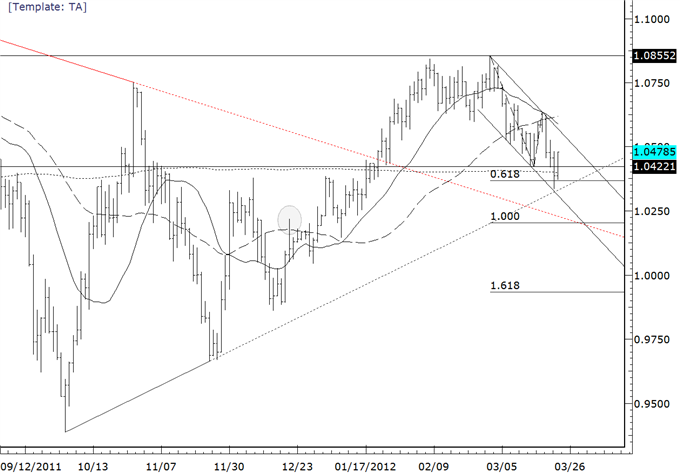 Joel – Our bearish outlook in this market is being reaffirmed with the latest pullback and we continue to project deeper setbacks over the coming days and weeks back below parity. A fresh lower top now looks to be carving by 1.0855 and only back above 1.0640 would delay and give reason for concern. From here, look for the latest break below 1.0420 to open the next downside extension towards 1.0200 over the coming sessions. 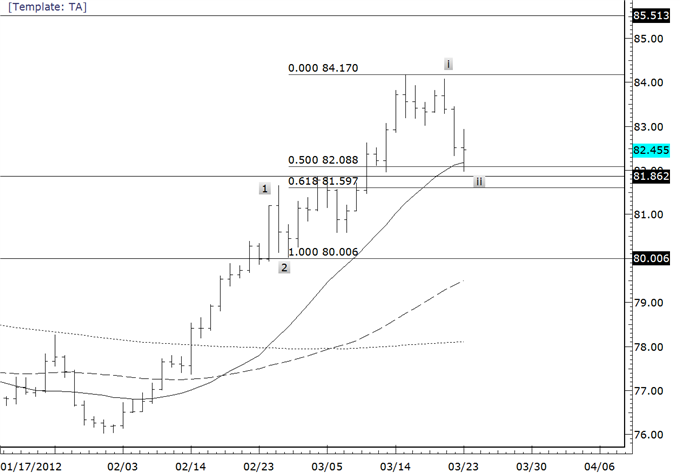 Joel – The market is doing a good job of showing the potential for the formation of a major cyclical bottom after closing above the weekly Ichimoku cloud for the fist time since July 2007. This further solidifies basing prospects and we could be in the process of seeing a major bullish structural shift that exposes a move towards 85.00-90.00 over the coming weeks. At this point, only back under 77.00 would delay outlook and give reason for concern. However, in the interim, it is worth noting that gains beyond 84.00 over the coming sessions could prove hard to come by with shorter-term technical studies needing to unwind from their most overbought levels in over 10 years before a bullish continuation. As such, we would caution buying breaks above 84.00 for the time being and instead recommend looking for opportunities to buy on dips towards 80.00-81.00. A short-term double top on the daily chart could open a move into our desired buy target area. 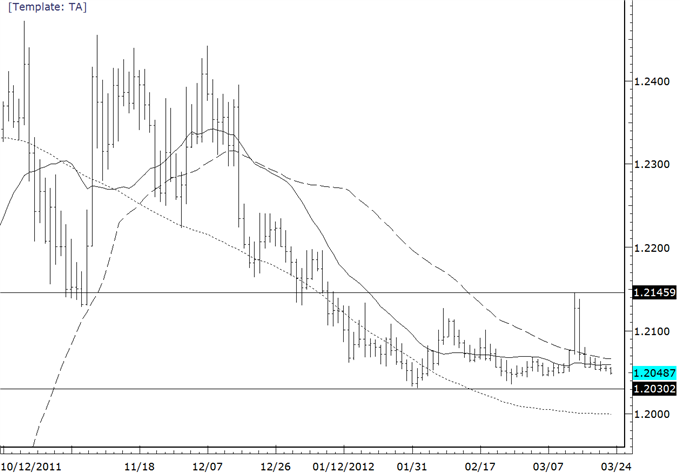 Joel – So long as this market remains well supported ahead of 1.2000, we like the idea of looking for opportunities to buy the cross rate in anticipation of an eventual upside acceleration back above the recent highs at 1.2150. The contraction in volatility in recent weeks also suggests that we could soon see a major breakout which we project will be to the upside. Look for a break and daily close back above 1.2070 to confirm bias and accelerate gains. Only back under 1.2000 negates and gives reason for pause. 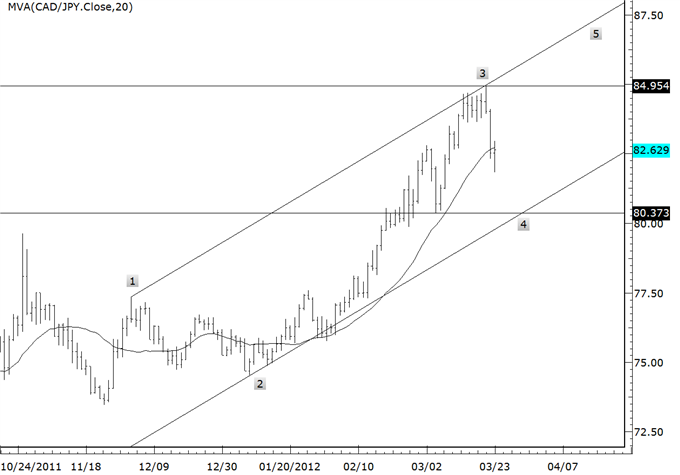