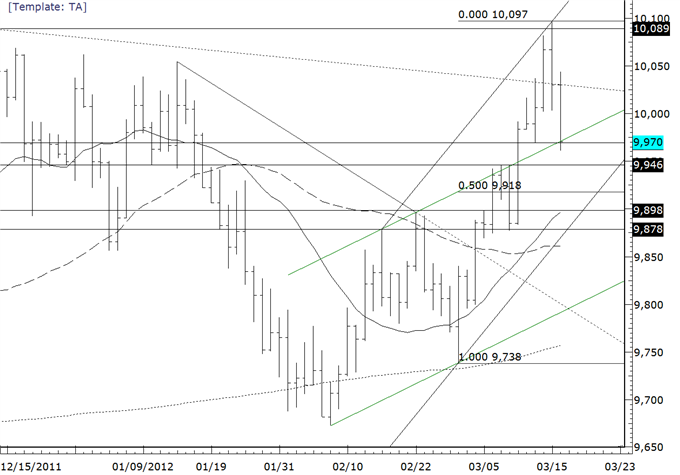 US Dollar is Vulnerable after Sharp Weekly Reversal

Jamie – The Dow Jones FXCM Dollar Index (Ticker: USDOLLAR) broke through the base channel (green) last week and is now acting as support along with the 3/13 low at 9969. Failure to remain above the green channel would shift focus lower towards the confluence of the 20 day average / 50% retracement of the advance from 9738, at 9900/20. These levels intersect channel support (in black) next week. Bottom line (next 4 weeks): Sideways? 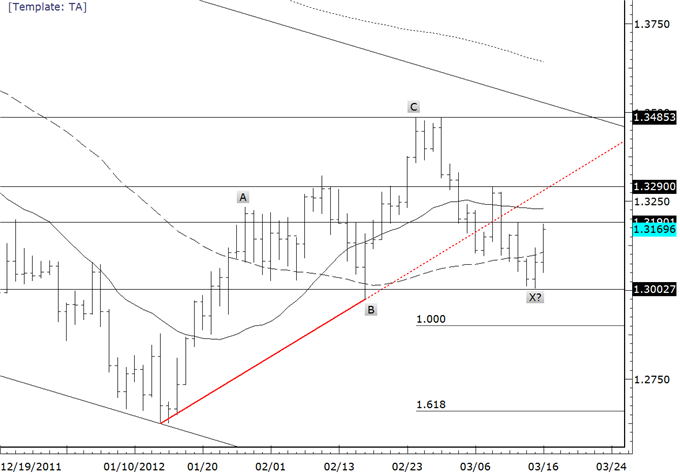 Jamie – Thursday’s outside day gave way to a break of the high and the EURUSD is closing the week on its highs. From a technical perspective, there are plenty of reasons to take this advance seriously. Medium term, the 20 day average is above the 50 day average and recent divergence with the USDCHF is typical of turns (USDCHF traded above the February high while EURUSD held the February low). 13140 and 13100 are supports next week and bulls are favored against 13045. 13290, which intersects with former trendline support next week, is interim resistance. Bottom line (next 4 weeks): Higher?

Joel – The recent aggressive pullback from just under 1.3500 strengthens the prospects for the end of a corrective move in 2012. From here, the risks are tilted to the downside and a break below next key support by 1.2975 will be required to officially put the pressure on the downside and open an acceleration of declines back towards the 2012 lows at 1.2620. At this point, only a break back above 1.3300 would alleviate downside pressures and delay outlook. 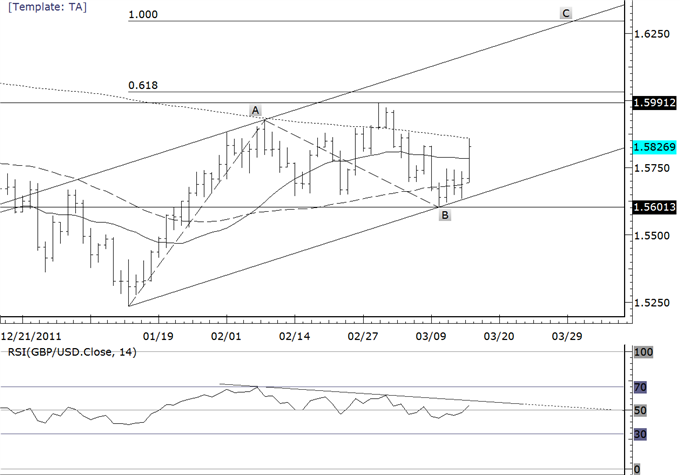 Jamie –The GBPUSD technical position is similar to that of the EURUSD. “From a technical perspective, there are plenty of reasons to take this advance seriously. Medium term, the 20 day average is above the 50 day average” although Friday’s sharp rally was capped by the 200 day average. 15800 is support next week and bulls are favored against 15690. Structurally, the decline from the 2/8 high may be a completed flat. If that count is correct, then a rally towards 16300 is in its early stages. 16298 is where the rally from the January low would consist of 2 equal legs and intersects channel resistance in early April. Bottom line (next 4 weeks): Higher?

Joel – The market has been costly confined to tra//de between the 100 and 200-Day SMAs since early February and the latest break back below the 100-Day SMA therefore suggests that we could be on the verge of a bearish break. The key level to watch comes in by 1.5600, and a break and close below this level will reaffirm bearish outlook and open the door for a more significant bearish decline towards the 1.5000-1.5300 area further down. Inability to establish below 1.5600 however, will suggest that more choppy directionless trade is in the cards. 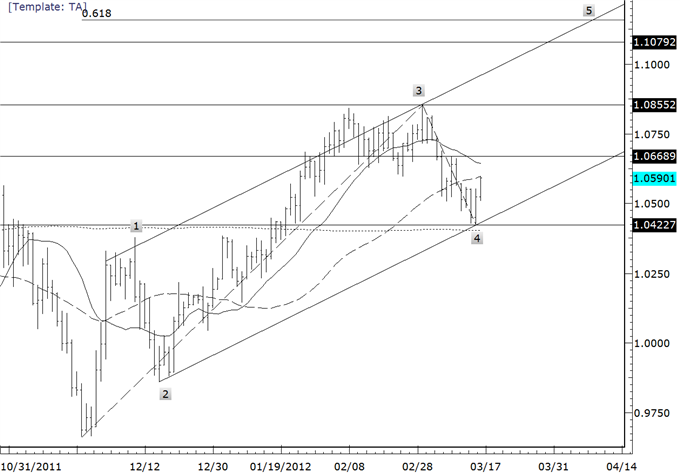 Joel – Daily studies are finally starting to look stretched and warn of a more significant pullback ahead. Look for the latest break and daily close below 1.0595 to confirm outlook and open the door for a more legitimate bearish reversal towards the 1.0300 area over the coming days. Only a daily close back above 1.0670 would delay topping outlook and give reason for pause. 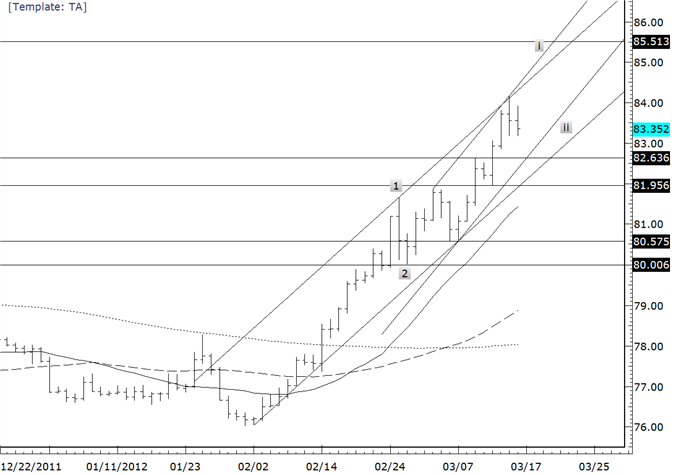 Joel – The market is doing a good job of showing the potential for the formation of a major cyclical bottom after closing above the weekly Ichimoku cloud for the fist time since July 2007. This further solidifies basing prospects and we could be in the process of seeing a major bullish structural shift that exposes a move towards 85.00-90.00 over the coming weeks. At this point, only back under 77.00 would delay outlook and give reason for concern. However, in the interim, it is worth noting that gains beyond 84.00 over the coming sessions could prove hard to come by with shorter-term technical studies needing to unwind from their most overbought levels in over 10 years before a bullish continuation. As such, we would caution buying breaks above 84.00 for the time being and instead recommend looking for opportunities to buy on dips towards 80.00-82.00. 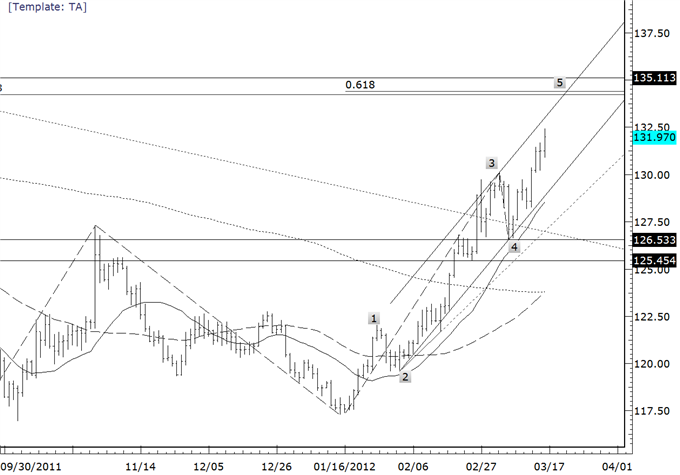 Jamie – Continue to look higher in the GBPJPY but watch the Elliott channel for resistance. The advance from 12653 is probably a 5th wave and 5th waves are followed by reversals. Fibonacci objectives (.618% extension of waves 1 through 3 and 161.8% extension of September-October 2011 rally) are near the 5/31/11 high at 13510. Bottom line (next 4 weeks): Topping

Joel – The cross continues to show evidence of the formation of a meaningful base, with the latest topside acceleration blowing through a good deal of significant resistance levels in the form of the 200-Day SMA and some critical multi-day highs in the 131.00 area. From here however, daily studies are looking quite stretched in the short-term and we would be on the lookout for a corrective pullback to allow for these studies to unwind before the market considers a bullish resumption. Selling a break back under 130.00 for a move towards 125.00 is therefore the preferred strategy over the coming week.