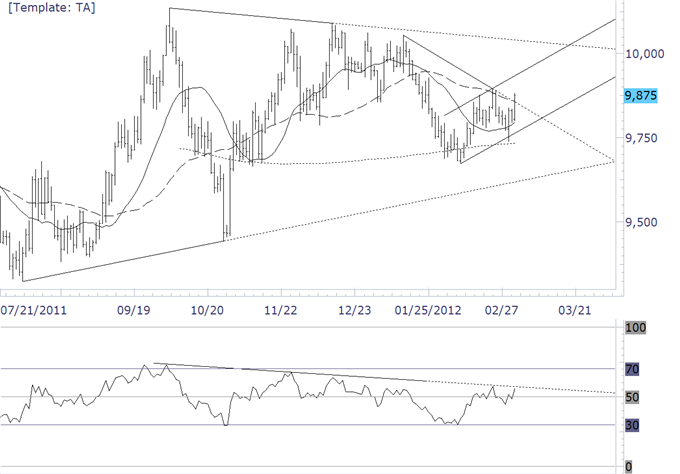 US Dollar Bear Trap May Give Birth to March Bull

Jamie – The Dow Jones FXCM Dollar Index (Ticker: USDOLLAR) may be turning the corner. Technically, bulls’ position is now supported by the 20 day average hold, 2/29 reversal and break above the confluence of the trendline resistance and the 50 day average. A bullish bias is warranted as long as price is above 9836. Interim resistance is 9940 but focus is on the trendline near 10000. Bottom line: sideways/higher? 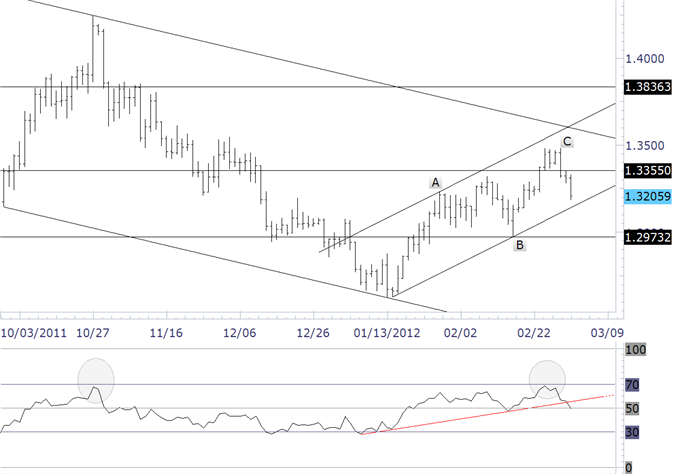 Jamie – The extent of the decline from 13485 is enough to suggest that the 3 wave rally from the January low is complete and that the longer term bear trend has resumed. Daily RSI rolled over just ahead of 70 (just like it did at the October top), which is typical in a bear market. Interim support comes in at channel support (13150 on Monday and increases 20 pips per day) and a break exposes the February low at 12974. Rallies should now be sold with a stop above 13355. 13265-13300 is resistance. Bottom line: Lower 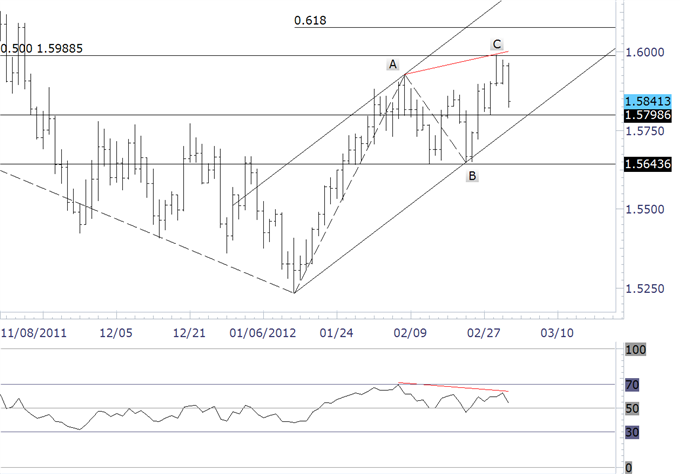 Jamie –Like the EURUSD, the GBPUSD rally to a new high (above end of wave A) satisfies minimum requirements for wave C. A larger advance was expected but it would be foolish to dismiss the reversal evidence, especially at the beginning of a new month and amid waning momentum (see the RSI divergence). 15800 is interim support. I favor shorts into 15880-15900. The new month allows for a tight stop (above 15975). Bottom Line: Lower

Joel – The market has now broken above the 200-Day SMA for the first time in several months and this now warns of the potential for additional upside above 1.6000 over the coming sessions. Still, we see any additional rallies as being very well capped ahead of 1.6200 and our strategy is to look to fade overdone intraday rallies above 1.6000 in favor of an underlying bearish resumption. Conservative traders will want to wait for confirmation on a break and close below 1.5800. 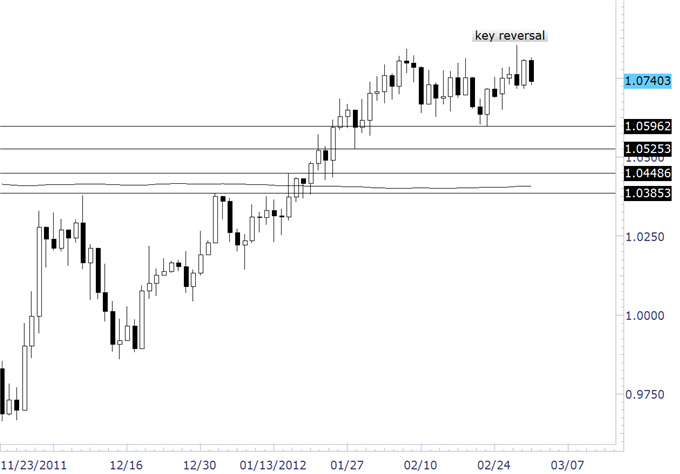 Jamie – Recent analysis remains valid – “After trading to its highest level since August 2nd, the AUDUSD reversed sharply and carved out a key reversal in the process. The very short term wave pattern also has bearish implications.” A short was taken last night (Thursday) on the break of the Asian session low (10785). The stop is 10820. A short term objective is 10675 but the false bullish break on Wednesday is a classic trap that will most likely be resolved with a sharp decline and a run on stops under 10595. A break would target 10525 and 10450. Bottom line: Lower

Joel – Although the market has been very well bid after taking out the key October highs by 1.0755, daily studies are finally starting to look stretched and warn of a more significant pullback ahead. Look for a break back below 1.0595 confirm outlook and open the door for a more legitimate bearish reversal. Only a daily close back above 1.0845 would delay topping outlook and give reason for pause. 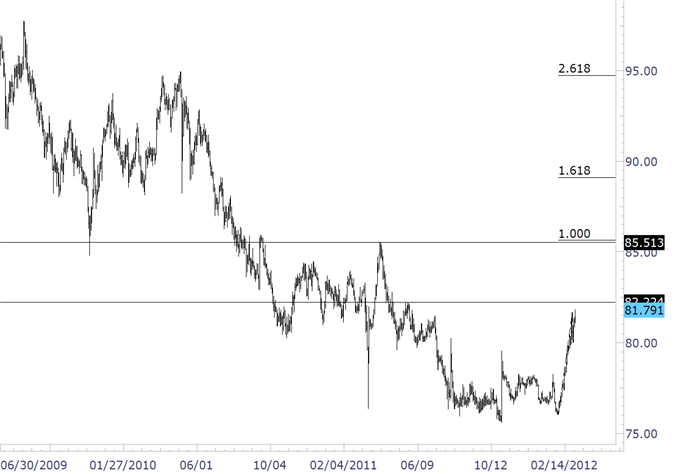 Joel – The market is doing a good job of showing the potential for the formation of a major cyclical bottom after taking out the 200-Day SMA and now clearing psychological barriers by 80.00 for the first time in 6 months. This further solidifies basing prospects and we could be in the process of seeing a major bullish structural shift that exposes a move towards 85.00-90.00 over the coming months. At this point, only back under 77.00 would delay outlook and give reason for concern. However, in the interim, it is worth noting that gains beyond the recent highs at 81.70 over the coming sessions could prove hard to come by with technical studies needing to unwind from their most overbought levels in over 10 years before a bullish continuation. As such, we would caution buying breaks above 81.70 for the time being. 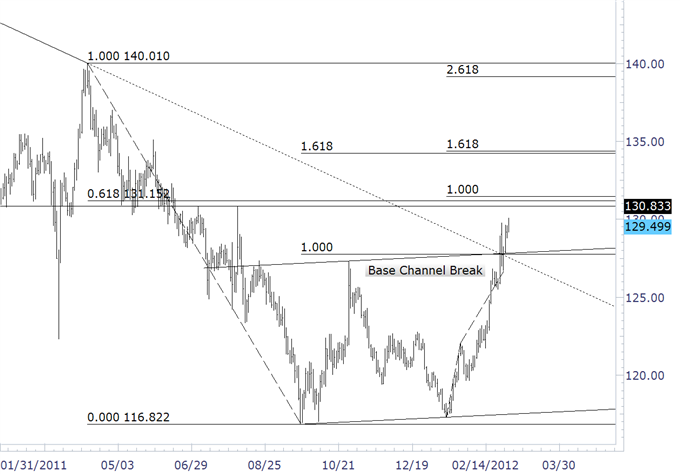 Joel – The cross continues to show evidence of the formation of a meaningful base, with the latest topside acceleration blowing through a good deal of significant resistance levels in the form of the 200-Day SMA and critical multi-day highs from October 2011 at 127.35. From here, next key resistance comes in by the August 2011 highs at 130.85, and once this level is tested, we would be on the lookout for a short-term corrective pullback to allow for severely overbought daily studies to unwind before the market considers a bullish resumption. Selling a jump to 130.85 could therefore be an attractive short-term counter-trend strategy. 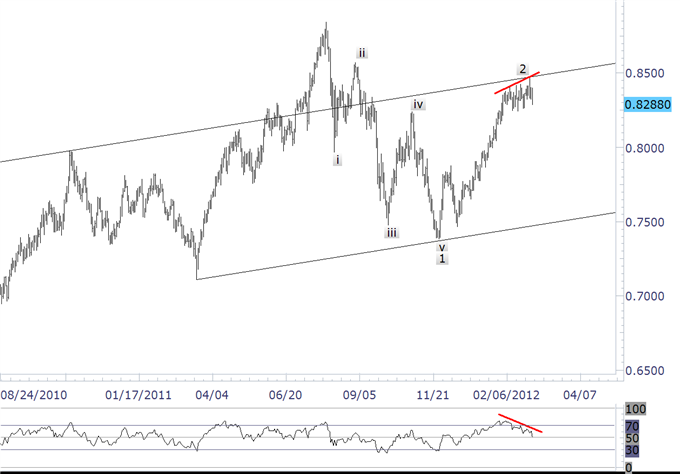 Jamie – The NZDUSD carved out a key reversal on Wednesday. Interestingly, the high was registered right at the line that is used to estimate the right shoulder of a head and shoulders pattern (line parallel to neckline is extended from left shoulder). Of course, we don’t know if a multiyear head and shoulders is unfolding but this method is anticipatory. The authoritative break below the 3/1 low warrants a bearish bias against 8406. A drop below 8244 would shift focus to 8140 and 8080. Bottom line: Lower