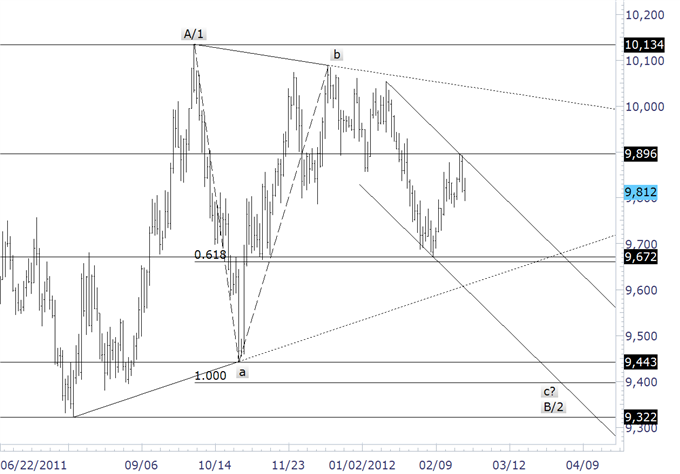 Jamie – The Dow Jones FXCM Dollar Index (Ticker: USDOLLAR) rally failed at the 50 day average this week (RSI trendline resistance held as well) which keeps us looking lower towards the February low at 9672 and then the trendline that extends off of the August and October 2011 lows. A break of that trendline would strongly suggest continuation towards the October low (as per the above wave count) in a deep 2nd wave correction. Early March highs/lows should help position us for this next larger bear leg. 9830/45/65 are levels to watch for resistance and only a move above 9896 would negate the bearish view. Bottom line: Lower 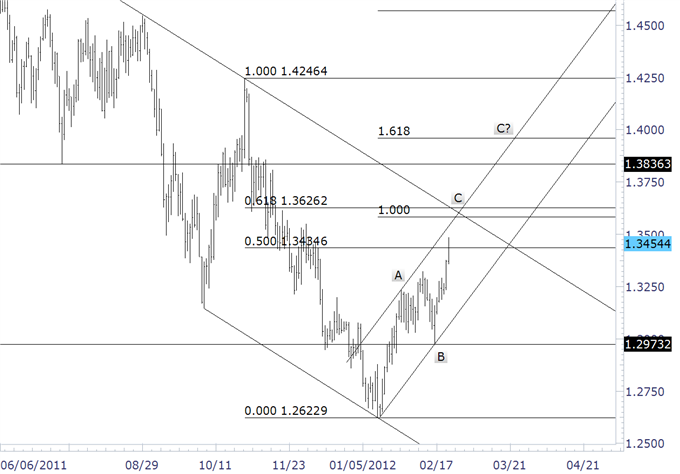 Jamie – I wrote here last week that “the impulsive move higher from 12974 is the best evidence yet for an extension of the rally that began at the January low. From an Elliott perspective, the drop into 12974 completes a B wave flat and objectives for wave C are near 13600 (A=C at 13584 and 61.8% extension of decline from 14247 is at 13627). An intersection of channels and Fibonacci levels occur in early March.” Continue to focus on the area surrounding 13600, but be open to an extended advance through March towards the 161.8% extension at 13960. Bulls are firmly in control above 13270 and dips should be bought. Support early next week is 13425. Bottom line: Higher

Joel – The latest break and daily close above 1.3325 ends a recent bout of multi-session consolidation and now opens the door for the next upside extension towards the 1.3600-1.3700 area over the coming days. While our broader outlook remains aggressively bearish with a downside target by 1.2000 in 2012, the 2012 correction within the broader downtrend off of the 2008 record highs is still in play, and shows potential for additional gains. Still, we prefer to remain sidelined as our bearish bias has us looking for opportunities to sell rather than attempting to buy into a corrective rally within a broader downtrend. We would also not rule out the possibility for a topside failure well ahead of 1.3600-1.3700, but given the latest break, the risk for additional gains seems like a very real possibility that needs to be considered and anticipated. Back under 1.3230 will be required at a minimum to alleviate immediate topside pressures. 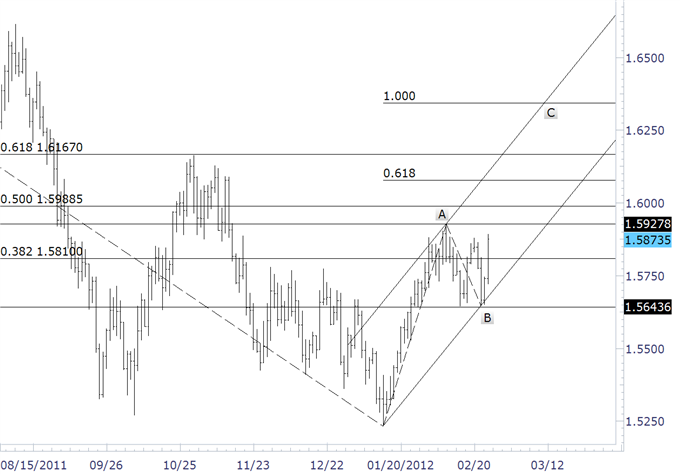 Joel – Rallies have once again been well capped ahead of the 200-Day SMA in favor of yet another bearish decline. But setbacks have stalled by some key multi-session support by 1.5645, and it will take a break and close back below this level to officially force a shift in the structure and accelerate declines. Until then, expect some more choppy consolidation and potential range trade between 1.5650-1.6000. 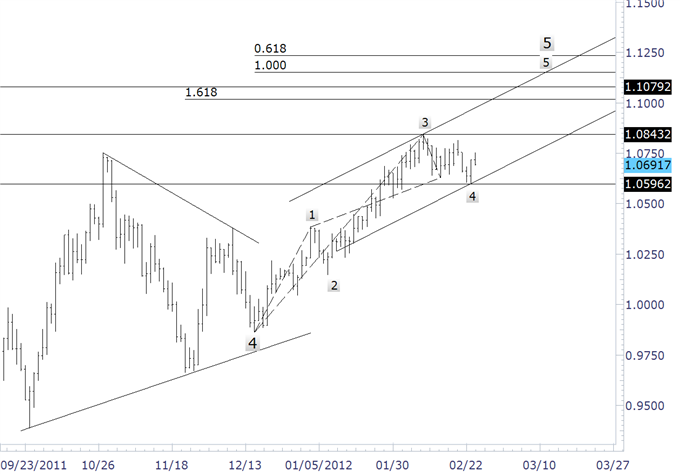 Joel – Although the market has been very well bid after taking out the key October highs by 1.0755, daily studies are finally starting to look stretched and warn of a more significant pullback ahead. Look for a break back below 1.0525 confirm outlook and open the door for a more legitimate bearish reversal. A break and daily close back above 1.0845 would delay topping outlook and give reason for pause. 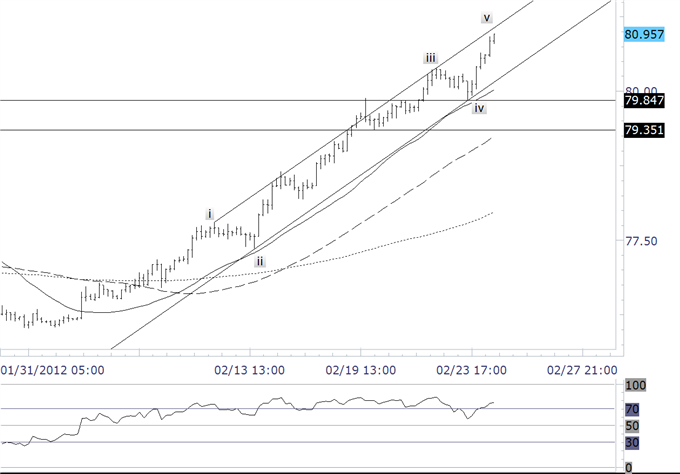 Jamie – Last Friday’s commentary was that “the break above the trendline that extends off of the 2008 and 2010 high is additional evidence that a long term trend change has taken place. Currently testing the October high (and 100% extension of 7735-7866), pullback / consolidation would present an opportunity to get long. Look for lows early in the week and early in Tokyo trading (7 pm EST). Also, current conditions warrant use of short term moving averages as support (5 and 10 day). Levels of interest in the coming weeks and months are 8025, 8150 and 8225. The 5 day average was reached Thursday and Friday and price has rocketed to reach 8100. 8150 is in play of course but the specter of 5 waves from the low suggest that a top is near (don’t buy in now). Supports going forward are 8040, 7990, and 7935. My interest in the long side will be piqued again at these levels. Bottom line: Topping

Joel – The market is doing a good job of showing the potential for the formation of a major cyclical bottom after taking out the 200-Day SMA and now clearing psychological barriers by 80.00 for the first time in 6 months. This further solidifies basing prospects and we could be in the process of seeing a major bullish structural shift that exposes a move towards 85.00-90.00 over the coming months. At this point, only back under 77.00 would delay outlook and give reason for concern. However, in the interim, it is worth noting that gains beyond 80.00 over the coming sessions could prove short-lived with technical studies at their most overbought levels in over 10 years and warning of some corrective declines towards previous resistance now turned support by 78.00 before bullish continuation. Selling rallies around 81.00 is therefore the preferred strategy over the coming sessions. 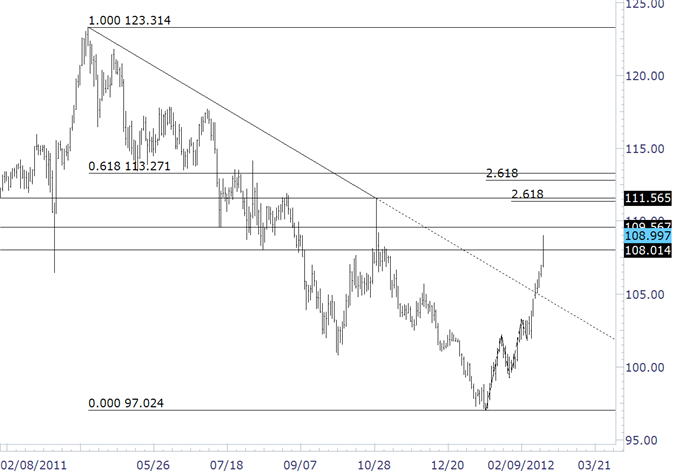 Joel – The cross continues to show evidence of the formation of a meaningful base, with the recent break back above 105.00 further confirming bullish bias to accelerate gains through latest key resistance in the form of the 200-Day SMA at 107.00. Daily studies are however severely stretched so we would not rule out the potential for a pullback towards 105.00 to allow studies to unwind, before the market looks to really establish above the longer-term moving average.