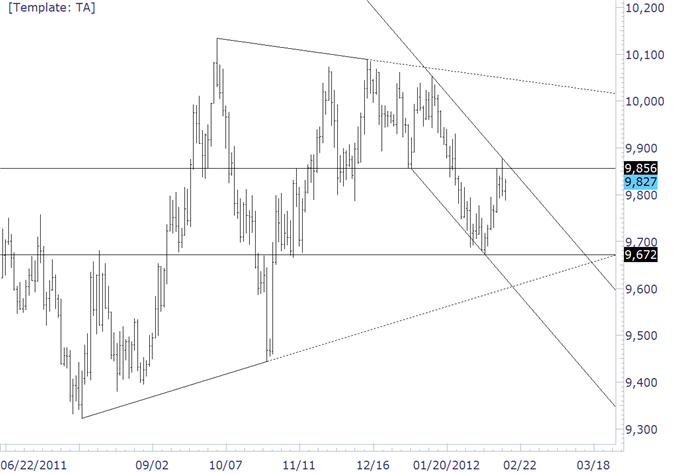 Explosive Euro Move on the Horizon

Jamie – The Dow Jones FXCM Dollar Index (Ticker: USDOLLAR) advanced Friday to test the February high. Near term structure lacks clarity at this point (several valid interpretations) but the contracting nature of price action from the 2011 low may be a large triangle. With this in mind, the USDOLLAR could still test slightly lower levels (November low) before turning higher for several months. 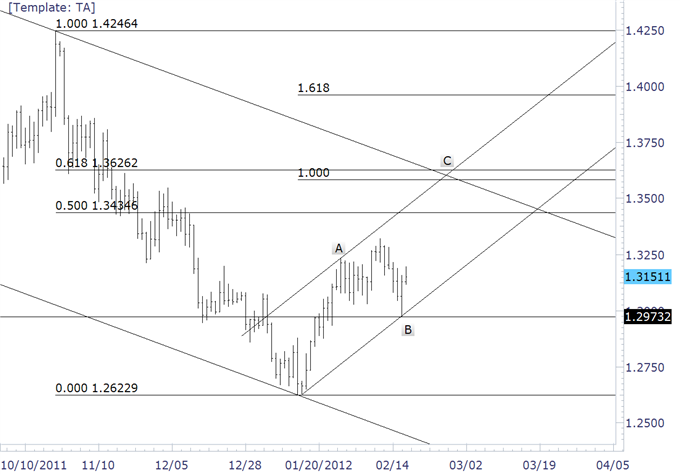 Jamie – The EURUSD has whipsawed traders in February, trading sideways, breaking higher, breaking lower, and reversing higher on Thursday. The impulsive move higher from 12974 is the best evidence yet for an extension of the rally that began at the January low. From an Elliott perspective, the drop into 12974 completes a B wave flat and objectives for wave C are near 13600 (A=C at 13584 and 61.8% extension of decline from 14247 is at 13627). An intersection of channels and Fibonacci levels occur in early March. Until further notice, I’ll favor a higher EURUSD through February (and an early March reversal). Near term support is 13115 and 13060.

Joel – Inability to close below previous key support at 1.3025 leaves the market locked in some multi-day consolidation, with no clear short-term directional bias. At this point, the key levels to watch above and below comes in by 1.3325 and 1.2970 respectively, and a break above or below will be required to open the door for the next major move. Until then, we can expect to see some choppy inter-day trade. 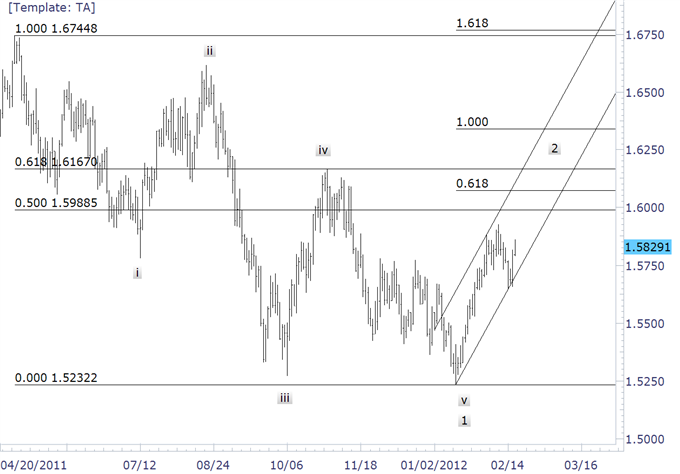 Joel – Gains have stalled out just shy of the 200-Day SMA for now and the market looks like it could be in the process of once again rolling over in favor of a bearish resumption. The key level to watch below comes in at 1.5645, and a daily close below will confirm outlook and accelerate declines back down towards the 1.5250 area. Until then, expect more choppy consolidation with rallies seen well absorbed above 1.5900. A break and close back above 1.5930 however will open the door for fresh upside through 1.6000. 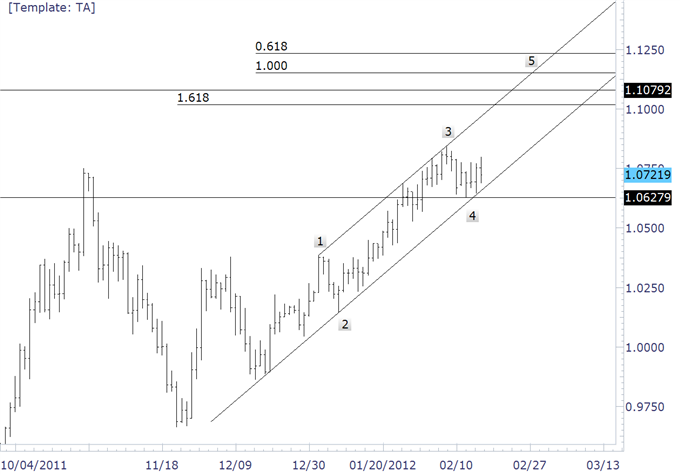 Joel – Although the market has been very well bid after taking out the key October highs by 1.0755, daily studies are finally starting to roll over from overbought territory and warn of a more significant pullback ahead. Look for the latest weekly close below 1.0700 to provide additional confirmation for short-term topping, while back below 1.0525 would be required to open the door for a more legitimate bearish reversal. A break back above 1.0845 would delay topping outlook and give reason for pause. 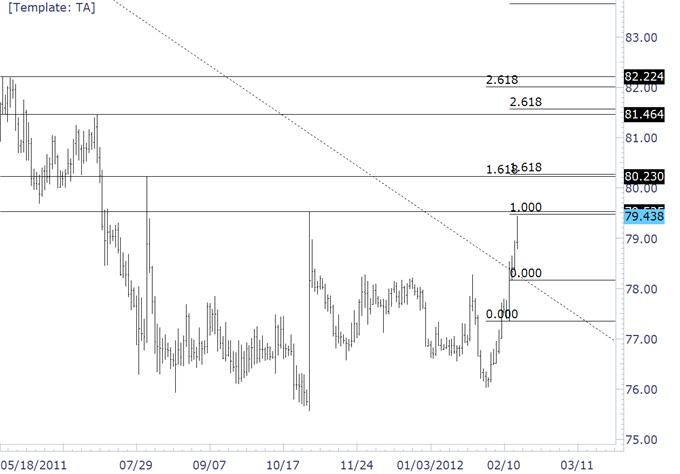 Jamie – The break above the trendline that extends off of the 2008 and 2010 high is additional evidence that a long term trend change has taken place. Currently testing the October high (and 100% extension of 7735-7866), pullback / consolidation would present an opportunity to get long. Look for lows early in the week and early in Tokyo trading (7 pm EST). Also, current conditions warrant use of short term moving averages as support (5 and 10 day). 7900 and 7865 are probable supports. Levels of interest in the coming weeks and months are 8025, 8150 and 8225 (all of these levels are former pivots and Fibonacci extensions).

Joel – The market has broken back above the 200-Day SMA for the first time in several months, while also managing to break to fresh 2012 highs beyond 78.30. Next key resistance comes in by the October highs at 79.55 and we look for a test of this level over the coming sessions. We could be in the process of seeing a major structural shift and once 79.55 is cleared, confirmation will be given. At this point, only back under 77.35 would delay outlook and give reason for concern. 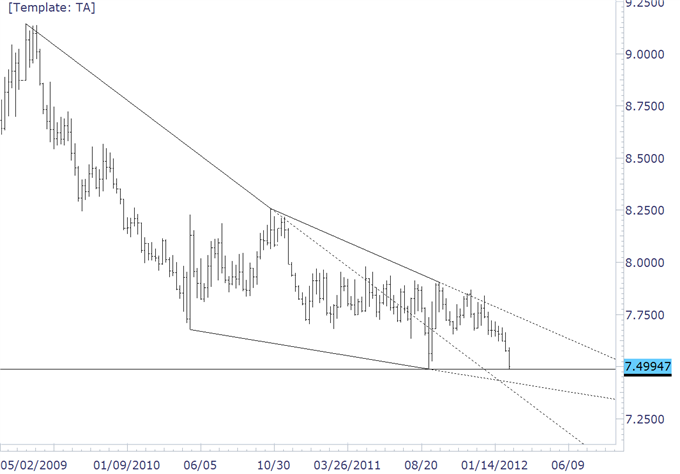 Joel – Has been very well offered over the pasts several weeks with the market under some intense pressure and trading back into the 7.50 area. However, on top of being a major psychological barrier, the 7.50 level represents some major support from back in September 2011, and given how stretched the market is looking, we would be on the lookout for a bullish reversal over the coming sessions. The risk/reward is compelling and we could very well see a push back towards 7.80 over the coming weeks. Only look to exit on a weekly close below 7.45. 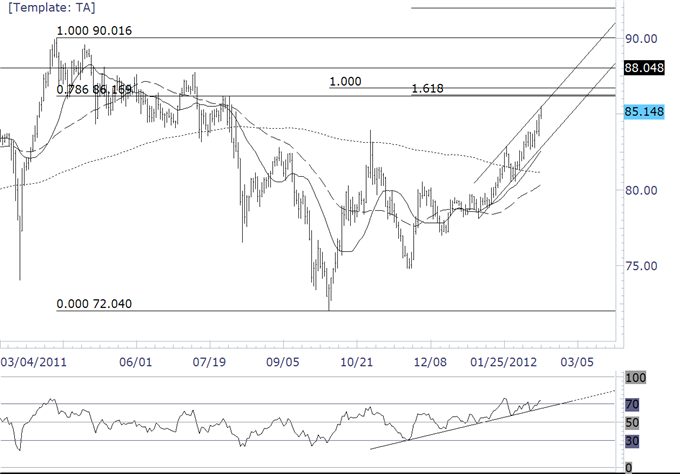 Jamie – Considering my bullish AUDUSD and USDJPY outlooks, it would make sense to assume that I expect the AUDJPY to rally significantly from the current level. This would not be a correct assumption however as one must entertain the possibility of USDJPY weakness and AUDUSD strength and vice versa occurring simultaneously. Still, the long cited ‘extended objective’ (100% extension of the rally from the October low at 8668) doesn’t seem so farfetched anymore. That Fibonacci extension is also reinforced by the 161.8% extension of the 7477-8053 advance, at 8629. There is also potential resistance from the April 2010 high at 8805. Currently testing steep channel resistance, support comes in at 8460 and 8425. Look higher as long as price is above 8350. The current situation may end much like it did in July 2007, with the AUDJPY extending higher in parabolic form before crashing.