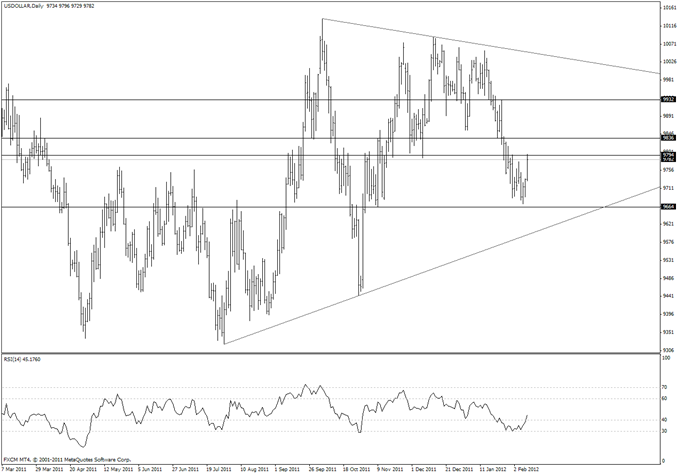 US Dollar Rally-Correction or New Trend?

Jamie – The Dow Jones FXCM Dollar Index (Ticker: USDOLLAR) advanced Friday to test the February high. Near term structure lacks clarity at this point (several valid interpretations) but the contracting nature of price action from the 2011 low may be a large triangle. With this in mind, the USDOLLAR could still test slightly lower levels (November low) before turning higher for several months.

Joel – The market remains locked in a multi-day consolidation and should continue to chop between the 9,600-10,100 area. Overall, we do retain a bullish outlook given the broader recovery structure out from a major base in 2011 and therefore recommend looking to buy on dips. Back above 9,800 should confirm and accelerate gains while ultimately, only a sustained break below 9,500 gives reason for rethink. 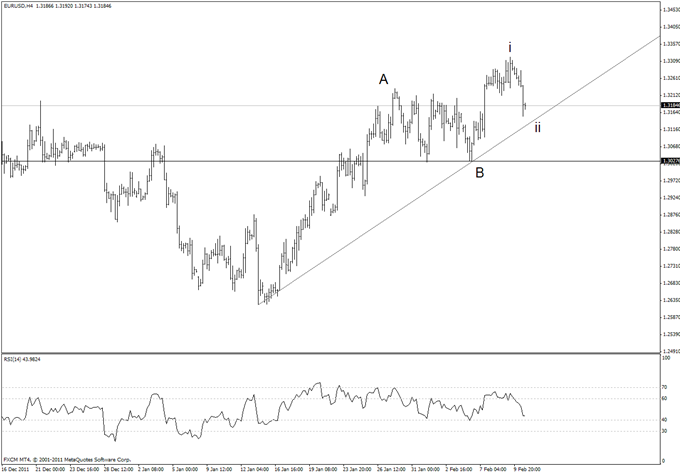 Jamie – The sharp EURUSD decline is viewed as a correction within the larger advance from the January low. Objectives remain the mid 13400s. The 50% retracement of the decline from the October high comes in at 13435 and bullish channel resistance is just above that level. Near term support comes in from trendline resistance near 13140. A drop below the February low at 13025 is needed in order to indicate a change in bias (from up to down).

Joel – The latest multi-session consolidation has been broken, with the pair clearing resistance at 1.3235 and opening a test of the 100-Day SMA just over 1.3300. Given the recent consolidation range of approximately 200 points (1.3025-1.3235), we will leave the door open for a move towards the 1.3450 area before the market eventually looks to stall out and carve a more meaningful lower top ahead of broader underlying bear trend resumption. A break back below 1.3025 is now required to officially alleviate immediate topside pressures. Jamie – Following January’s bull run, a topping pattern appears to be unfolding in February. Currently testing the 2/6 low (and short term channel support), respect potential for a bounce from these levels early next week. 15790 is resistance. A break under 15730 encounters the 20 day average at 15675 and former resistance at 15670.

Joel – Gains have stalled out just shy of the 200-Day SMA for now and the market looks to be entering a fresh period of consolidation before considering the next major move. Key levels to watch above and below come in by 1.5930 and 1.5730 respectively, and a daily close above or below will be required for clearer directional bias. A close below 1.5730 could open the door for some broader underlying bearish resumption, while back above 1.5930 exposes the October highs by 1.6170 further up. 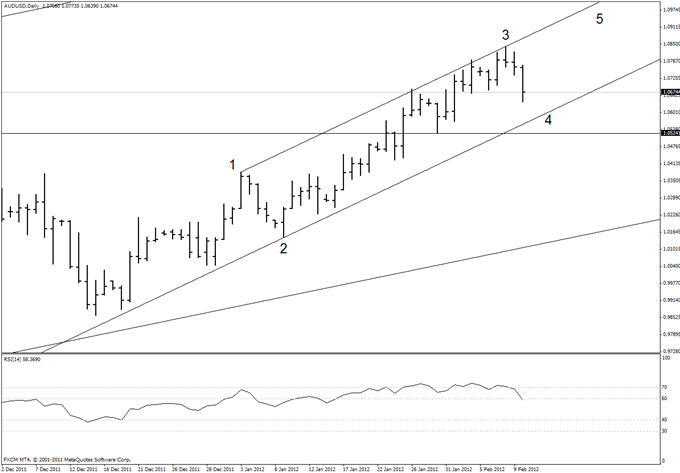 Jamie – The AUDUSD decline, although sharp, is viewed as a corrective 4th wave. Price has held former resistance at 10640 (from 1/31) but there is room for weakness towards channel support and the 20 day average (10585 on Monday). Expectations are for bulls to take back control and propel price to a new high (above 10844) in order to complete the 5 wave structure from the December low.

Joel – Although the market has been very well bid after taking out the key October highs by 1.0755, daily studies are finally starting to roll over from overbought territory and warn of a more significant pullback ahead. Look for a weekly close below 1.0700 to provide additional confirmation for short-term topping, while back below 1.0525 would be required to open the door for a more legitimate bearish reversal. A break back above 1.0845 would delay bearish outlook and give reason for pause. 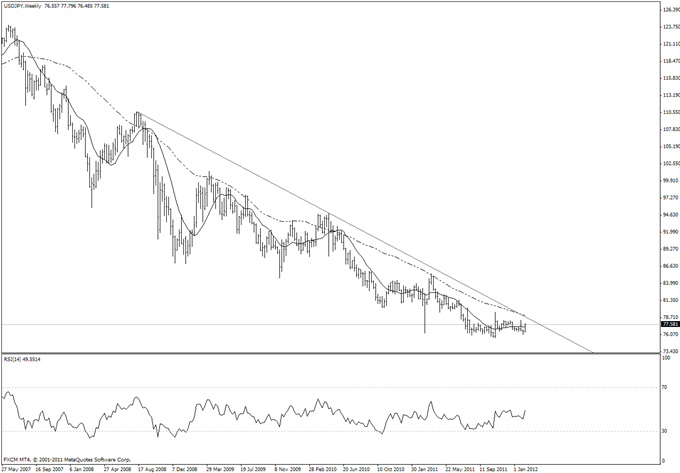 Joel – The market could once again be looking to carve an interim base after setbacks stalled shy of the record lows from October by 75.55. The latest daily close back above 77.00 should do a good job of alleviating immediate downside pressures and reintroducing longer-term basing prospects. From here, look for an acceleration of gains back towards next key resistance by 78.05-78.30 further up which represents the 200-Day SMA and some key range resistance. At this point, only back under 76.50 would negate outlook and give reason for concern. 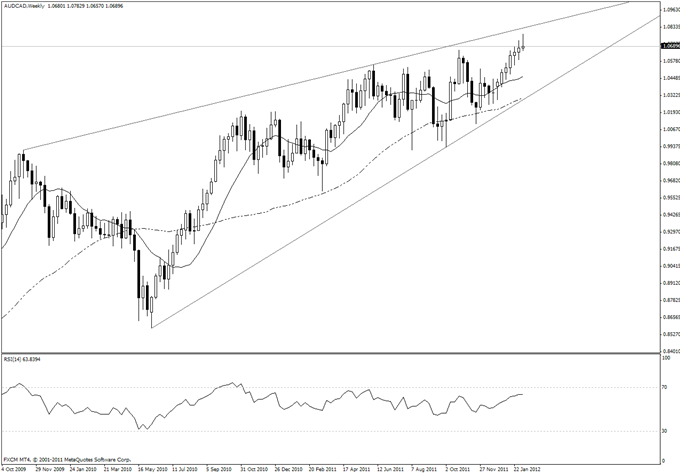 Joel – This is a market that is looking quite top heavy to us at the moment, and although the trend has been intensely bullish with the cross breaking to a fresh record high by 1.0785, technical studies are in the process of rolling over from more overbought levels and warn of a significant pullback over the coming weeks. Look for a weekly close below 1.0700 to confirm bearish outlook and accelerate declines back towards the 1.0300-1.0400 area at a minimum. Only back above 1.0785 negates and gives reason for pause. 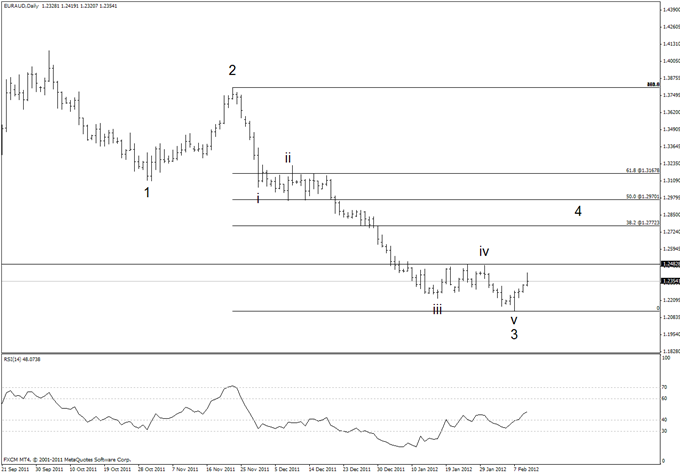 Jamie – Tuesday’s outside day reversal indicates that the EURAUD decline from the November high may be complete (an objective was just below 12000 but it would be foolish to ignore the reversal evidence) in 5 waves. The implications are for strength, perhaps as high as 12700+ over the next few months. Risk on long should be kept to 12230 and 12325 is support.