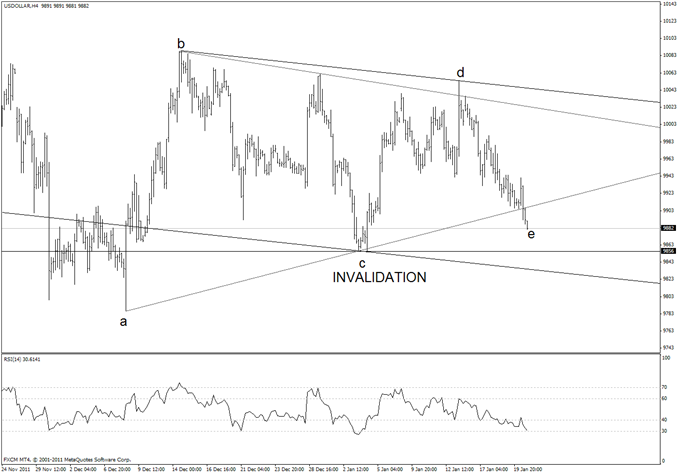 Jamie – The Dow Jones FXCM Dollar Index (Ticker: USDOLLAR) is bullish as long as price is above the early month low of 9856. Pattern wise, the swings since the November high may compose a triangle. In order for the triangle to remain valid, price must reverse before the early January low of 9856. A drop below there would shift focus to channel support and then the December low. 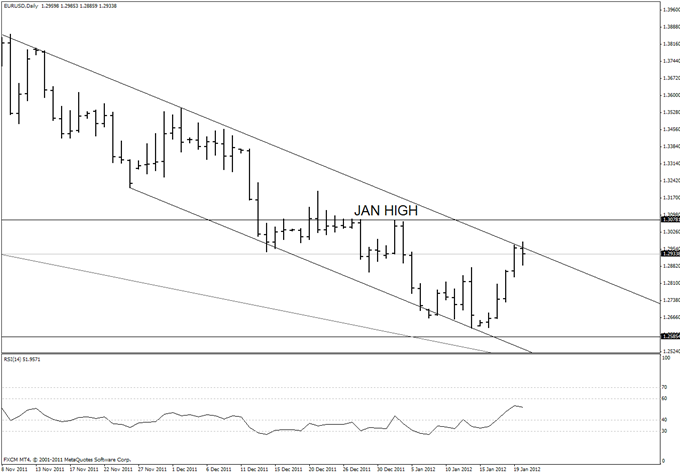 Jamie –Channel resistance and the 61.8% retracement of the decline from 13197 at 12978 have held as resistance. I maintain that risk is lower as long as price is under 13080 (reward/risk has shifted to the downside following the 300 + pip rally off of the low). Exceeding 13080 however would shift focus to 13200 and possibly much higher given the record number of short euro positions (COT). 12810/35 is potential near term support.

Joel – After finally taking out the 2011 lows from January by 1.2870, the market seems poised for the next major downside extension. Overall, we retain a strong bearish outlook for this market and look for setbacks to extend towards the 1.2000 handle over the coming months. While we would not rule out the potential for corrective rallies, any rallies should be very well capped ahead of 1.3200. Thursday’s daily close below 1.2850 could however accelerate declines towards 1.2500. 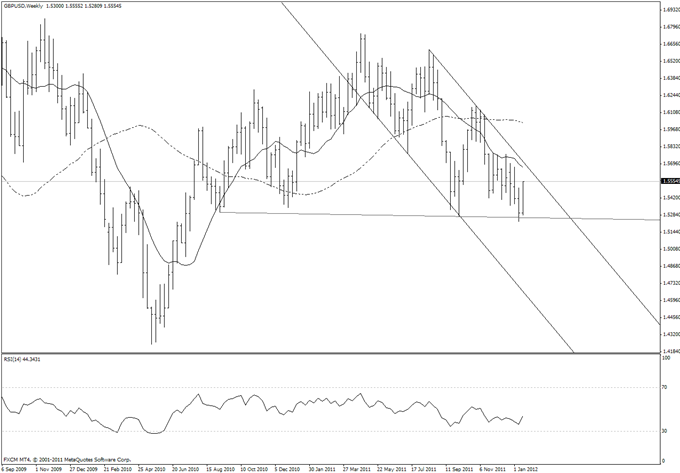 Jamie – The GBPUSD soared this week and the last level of potential resistance is the 1/4 low at 15579. Despite this week’s rally, I favor shorts with a stop above the early month high of 15670. Exceeding that level would open up a move towards 15780. From an Elliott perspective, the rally composes wave iv within an ending diagonal. Supports early next week are 15500 and 15450.

Joel – Rallies have been very well capped ahead of 1.5800 and it looks as though a lower top has now been carved out by 1.5780 ahead of the next major downside extension back towards the October lows at 1.5270. Key support comes in by 1.5360 and a daily close below this level will be required to confirm bias and accelerate declines. Ultimately, only back above 1.5780 would negate bearish outlook and give reason for pause. 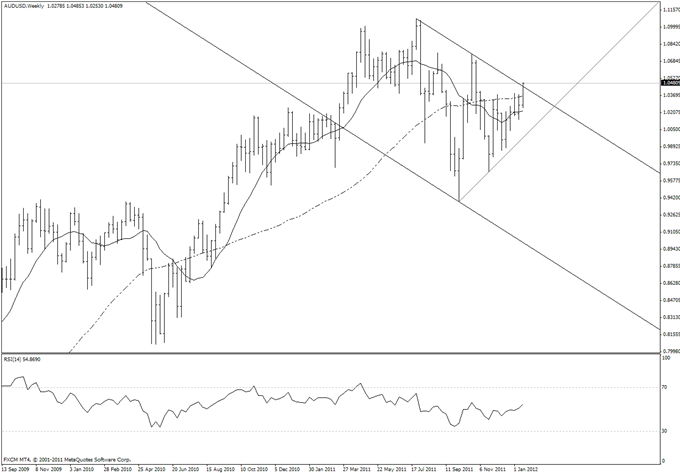 Joel – Any rallies are classified as corrective and we continue to see this market in the process of carving out a major top ahead of the next downside extension back below the critical lows from October at 0.9385. Look for an acceleration of declines from here towards 0.9660 over the coming weeks, which guards against the critical October lows at 0.9385. Ultimately, only a weekly close back above 1.0400 would delay outlook. 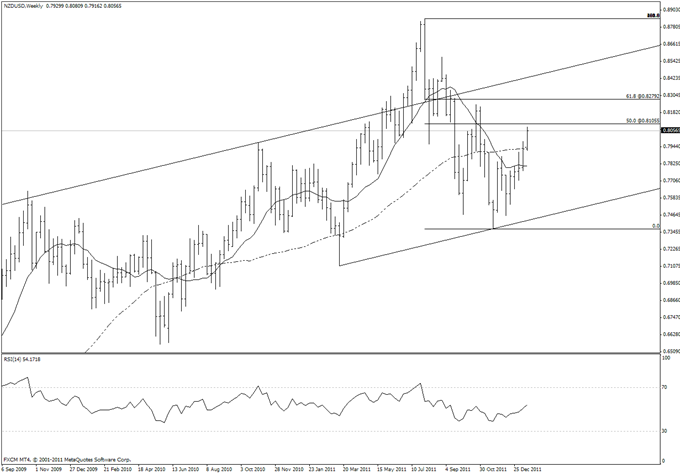 Jamie –“A picture perfect A-B-C advance may be complete in the NZDUSD. At minimum, price is at resistance and a dip is expected towards 7980. A drop below 7912 would confirm a reversal and shift focus towards 7770 and 7650. A new high still encounters resistance from the 50% retracement of the decline from the 2011 high at 8106.”

Joel – Any rallies are classified as corrective and we continue to see this market in the process of carving out a major longer-term top. From here, we look for the formation of the next major lower top below 0.8000 to be confirmed on a break back of 0.7370 over the coming weeks. Below 0.7370 should then accelerate towards next key support at 0.7110 further down. Ultimately, only a weekly close back above 0.8000 would negate. 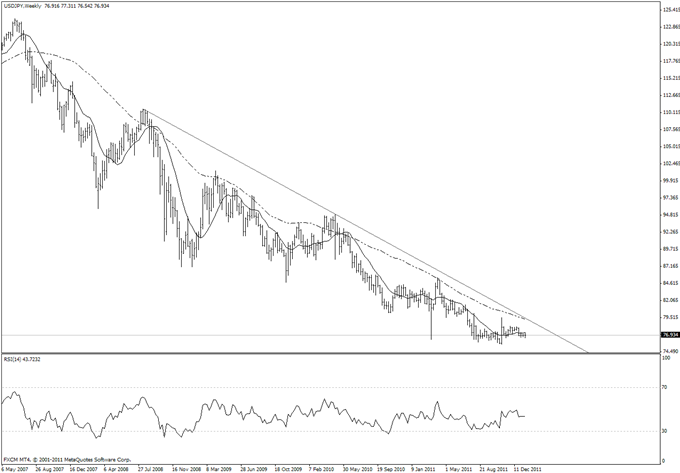 Jamie – For now, respect the range. The resistance zone is 7730 to former support at 7760. Support is the series of lows since November near 7650. Guessing the direction of the eventual break is futile but it is worth noting that speculative longs are at a level consistent with recent interventions. 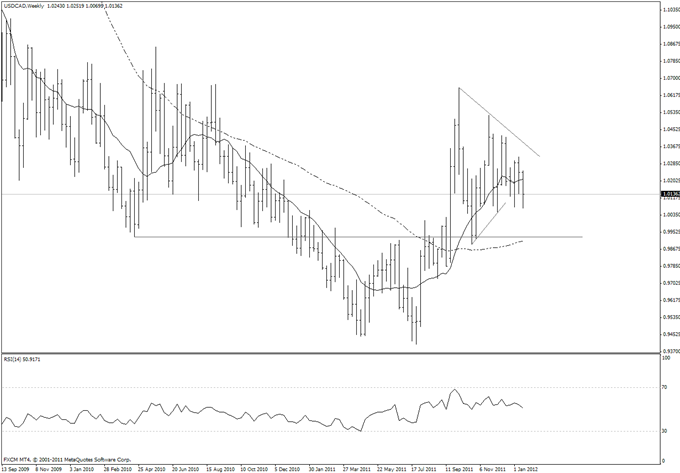 Jamie – The USDCAD has been confined to a 10075-10320 range so far in 2012. While the tight range has been annoying to endure, a break of the range will offer the first breakout opportunity of 2012. A bearish break would shift focus to 9725-9910 (September and November lows) while a bullish break could signal the beginning of a significant triangle break that exceeds 10657 (October high). Short term levels of interest next week are 10175-10215.

Joel – Our constructive outlook remains intact with the market consolidating above parity ahead of an eventual retest of the key October highs by 1.0660. From here, look for any interday pullbacks to be very well supported above 1.0000 on a daily close basis, in favor of an eventual break and fresh upside extension beyond 1.0660. Initial resistance comes in at 1.0425. Back above 1.0660 open a fresh upside extension towards 1.1000. Ultimately, only back below 0.9900 would give reason for concern. 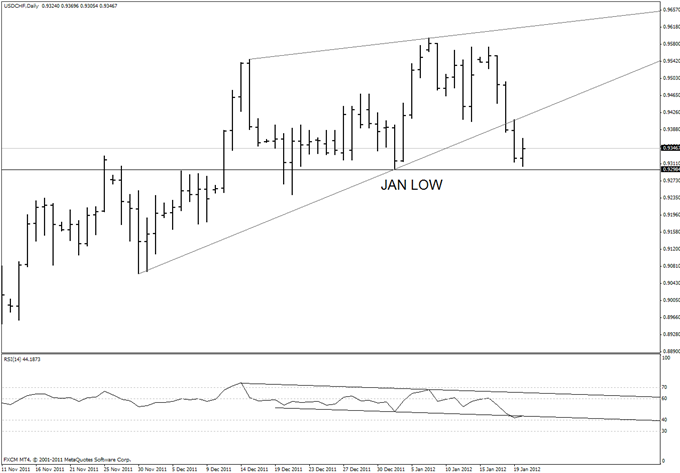 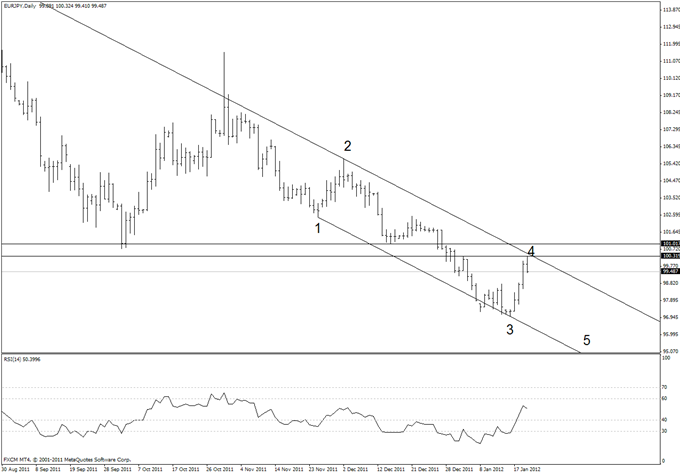 Jamie – The EURJPY has reversed from the early month high of 10030 (this is also the 38.2% retracement of the decline from 10569) and Elliott channel resistance. The downside is favored (in a 5th wave) as long as price is below today’s (Friday’s) high. The caveat of course is the potential for intervention and/or Euro short covering (COT warns of both), in which case 10250 would be of interest.

Joel – The latest break back below the daily Ichimoku cloud delays any hopes for a meaningful recovery on the cross and opens the door for a more significant decline below critical psychological barriers at 100.00. Although daily studies are oversold, the downtrend has been intense with the market trading by multi-year lows and showing no signs of reversal just yet. At this point, a break back above 102.55 will be required to alleviate immediate downside pressures. 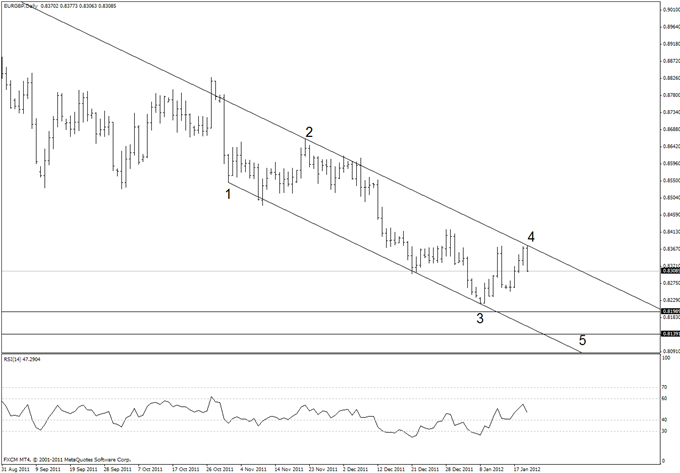 Jamie – The EURGBP is nearly identical to the EURJPY (not a surprise as the JPY is stationary). The EURGBP rally is a corrective 4th wave advance and a new low (under 8221) is expected. The Elliott channel and congestion from early January / late December has held so favor the downside against 8500 (a rally to that level would not fit within the confines of a bear). A new low would target the August and July 2010 lows at 8141 and 8066.

Joel – This market remains under intense pressure and the recent break below 0.8285 now opens the door for an eventual retest of the critical June 2010 base by 0.8065. However, daily studies are looking a little stretched and there are risks for some short-term corrective rallies before the downtrend is ready to reassert. Look for any rallies to find fresh offers towards 0.8500, while only back above 0.8600 would give reason for concern.