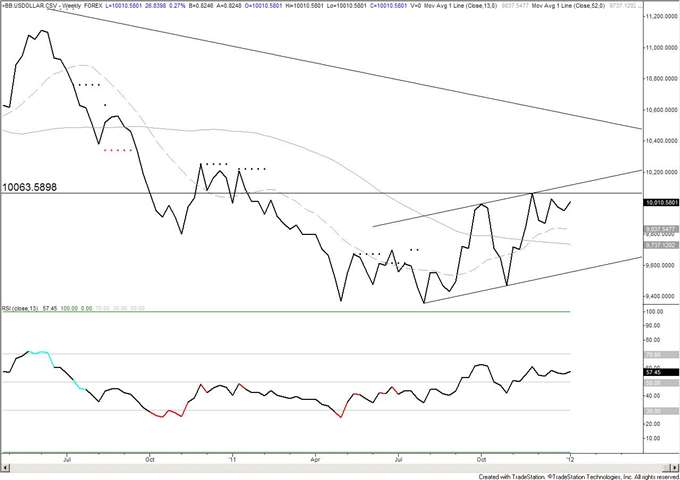 US Dollar Runs with the Bulls in New Year

Jamie – The Dow Jones FXCM Dollar Index (Ticker: USDOLLAR) decline from the December high is in 3 waves and the first leg of a larger impulse appears to be unfolding to begin the year. The combination of former trendline support (now resistance) and 5 wave rally from 9856 give scope to a turn lower, albeit in a correction. 9970 is initial support and a drop below would expose 9920/50 (50%-61.8% retracement of rally from 9856). The December high at 10090 and October high at 10134 are of interest on the upside. 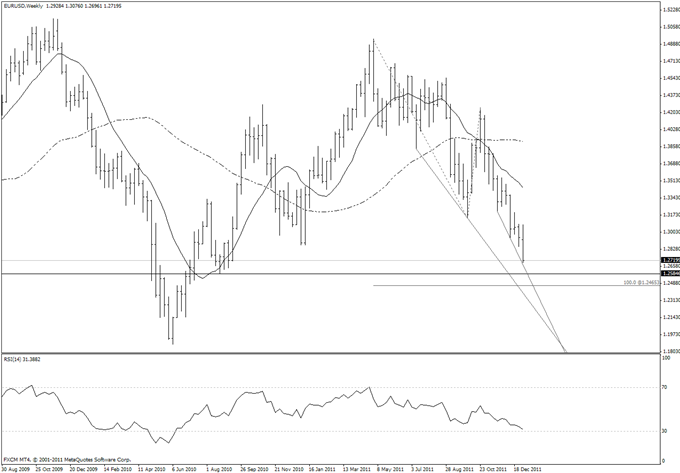 Joel – After finally taking out the 2011 lows from January by 1.2870, the market seems poised for the next major downside extension. Overall, we retain a strong bearish outlook for this market and look for setbacks to extend towards the 1.2000 handle over the coming months. While we would not rule out the potential for corrective rallies, any rallies should be very well capped ahead of 1.3200. Thursday’s daily close below 1.2850 could however accelerate declines towards 1.2500. 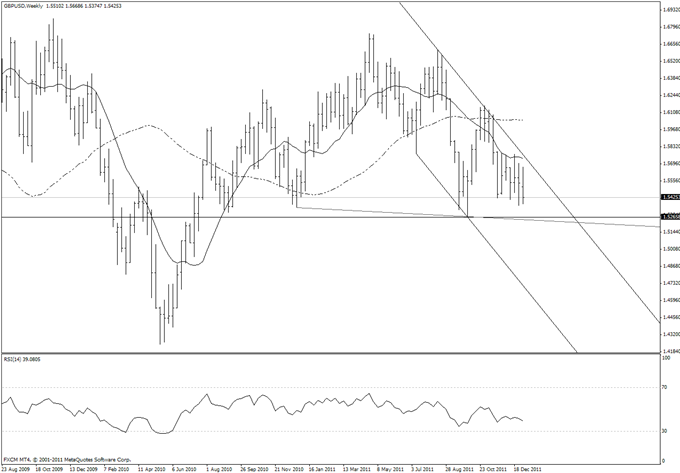 Jamie – Action since the 11/25 low is best described as sideways and may compose consolidation before a thrust lower that tests the October low and a leading diagonal from the May high. The GBPUSD has accelerated into the bottom of its range and I expect a break and test of the October low at 15270. Levels of interest below there are 15150 and 15000. Any strength would present an opportunity to get short against 15670 for the 15270 break. Resistance is 15465-15525.

Joel – Rallies have been very well capped ahead of 1.5800 and it looks as though a lower top has now been carved out by 1.5780 ahead of the next major downside extension back towards the October lows at 1.5270. Key support comes in by 1.5360 and a daily close below this level will be required to confirm bias and accelerate declines. Ultimately, only back above 1.5780 would negate bearish outlook and give reason for pause. 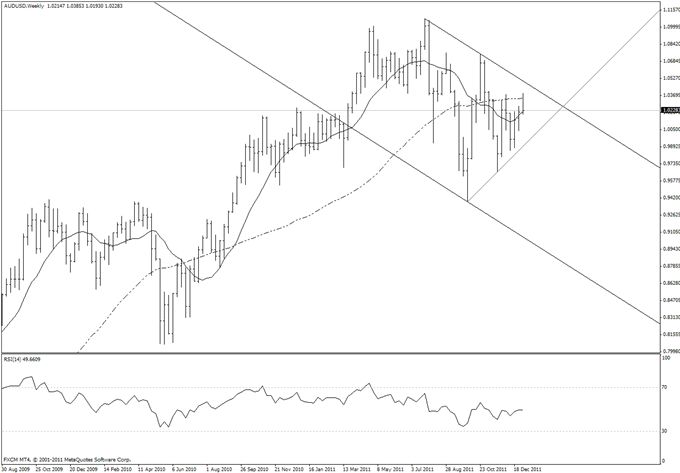 Jamie – Ultimately, a corrective wave is probably underway in the AUDUSD from the November low (9663). The rally on 1/3 feels like exhaustion and the impulsive decline from 10385 increases confidence in the short side as does the bearish weekly candle and rejection of strength at the December high and 52 week average. 10300 is resistance. 3 month implied volatility has declined to its lowest level since the September high, which warns of complacency and increases the risk of a sharp decline.

Joel – Any rallies are classified as corrective and we continue to see this market in the process of carving out a major top ahead of the next downside extension back below the critical lows from October at 0.9385. Look for an acceleration of declines from here towards 0.9660 over the coming weeks, which guards against the critical October lows at 0.9385. Ultimately, only a weekly close back above 1.0400 would delay outlook. 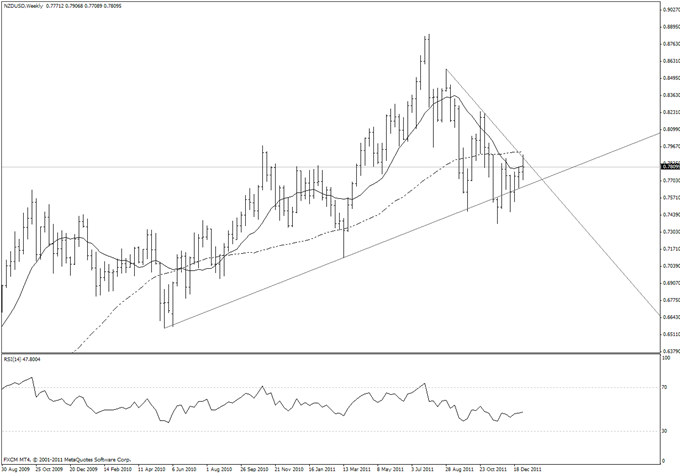 Jamie –Like the AUDUSD, the 1/3 rally has the look and feel of exhaustion. What’s more, trendline resistance held this week. Although the rally from both the November and December lows are not composed of equal waves, the structure is corrective. Coming under short term trendline support and specifically 7740 would increases confidence in the downside towards 7650. Resistance remains 7850. Based on a bearish AUDNZD pattern, I find the AUDUSD a more attractive short. 3 month implied volatility has declined to its lowest level since early August, which warns of complacency and increases the risk of a sharp decline.

Joel – Any rallies are classified as corrective and we continue to see this market in the process of carving out a major longer-term top. From here, we look for the formation of the next major lower top below 0.8000 to be confirmed on a break back of 0.7370 over the coming weeks. Below 0.7370 should then accelerate towards next key support at 0.7110 further down. Ultimately, only a weekly close back above 0.8000 would negate. 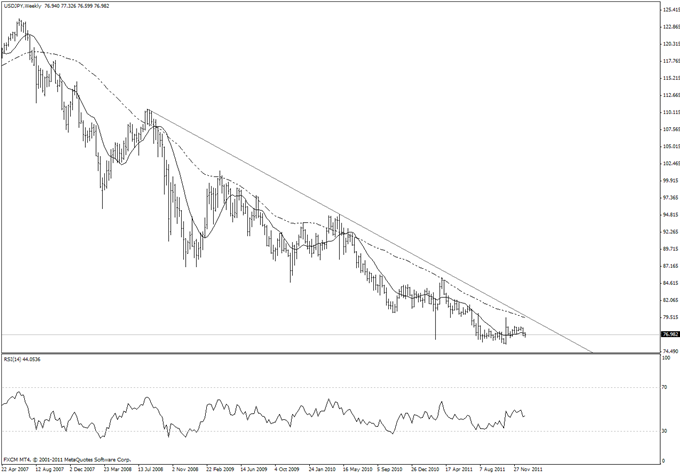 Jamie – The drop below 7714 triggered a bearish bias in the USDJPY. Volatility has ticked higher the last few days from its lowest level in over 4 years so beware of a sharp plunge to fresh all time lows. Rallies into resistance from 7720/60 would offer short opportunities against 7830. Initial resistance has been reached and a pop into 7760 would present a higher reward/risk ratio on the downside. 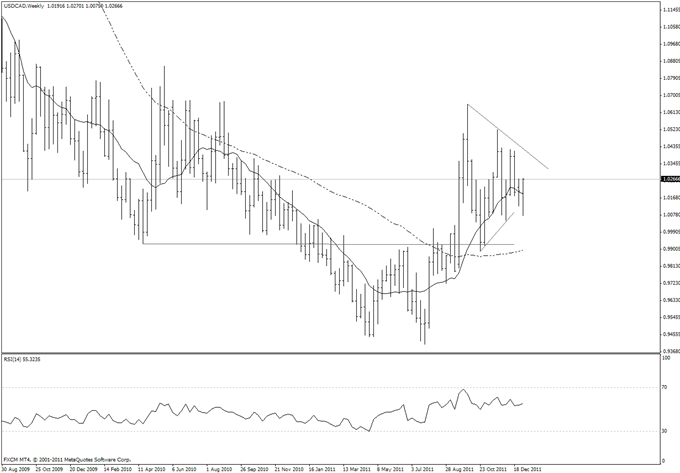 Jamie – The USDCAD has exceeded its 12/29 high at 10270 and is nearing trendline resistance from the November and December highs and the October and November highs (shown above). Consolidation since the October high may be taking the form of a triangle. The implications are for a few more weeks of sideways trading before price breaks through the October high. The upside is favored against 10075 and 10170-10225 is support.

Joel – Our constructive outlook remains intact with the market consolidating above parity ahead of an eventual retest of the key October highs by 1.0660. From here, look for any interday pullbacks to be very well supported above 1.0000 on a daily close basis, in favor of an eventual break and fresh upside extension beyond 1.0660. Initial resistance comes in at 1.0425. Back above 1.0660 open a fresh upside extension towards 1.1000. Ultimately, only back below 0.9900 would give reason for concern. 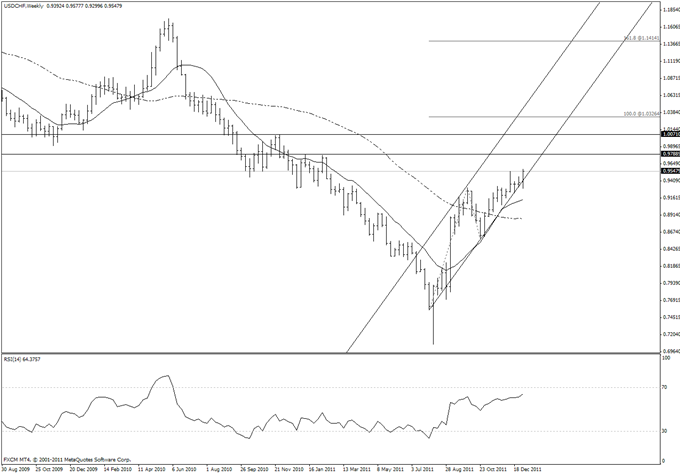 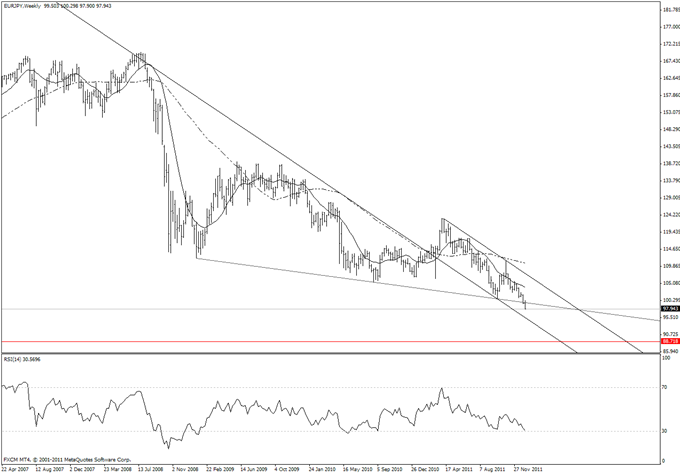 Jamie – The EURJPY continues to decline and there is no reason to expect an important low to form at these levels. Rather, treat bounces as opportunities to get short for the eventual capitulation at lower levels. Resistance is now 9850-9900 and any risk on shorts can be kept to 10030. Monthly pivots are 9530 and 9115 and the 2000 low is 8894.

Joel – The latest break back below the daily Ichimoku cloud delays any hopes for a meaningful recovery on the cross and opens the door for a more significant decline below critical psychological barriers at 100.00. Although daily studies are oversold, the downtrend has been intense with the market trading by multi-year lows and showing no signs of reversal just yet. At this point, a break back above 102.55 will be required to alleviate immediate downside pressures. 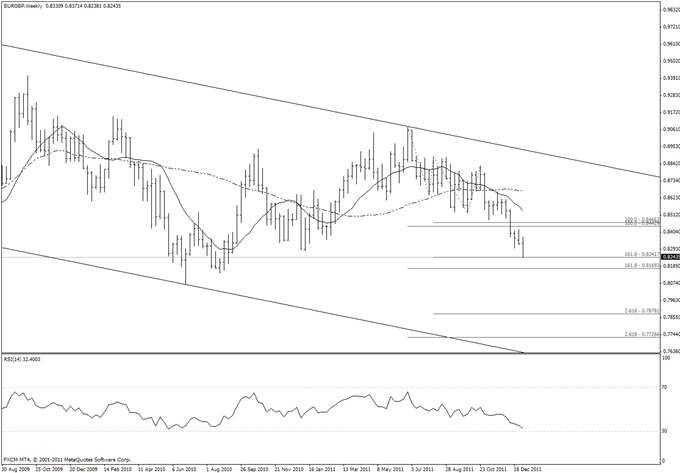 Joel – This market remains under intense pressure and the recent break below 0.8285 now opens the door for an eventual retest of the critical June 2010 base by 0.8065. However, daily studies are looking a little stretched and there are risks for some short-term corrective rallies before the downtrend is ready to reassert. Look for any rallies to find fresh offers towards 0.8500, while only back above 0.8600 would give reason for concern.