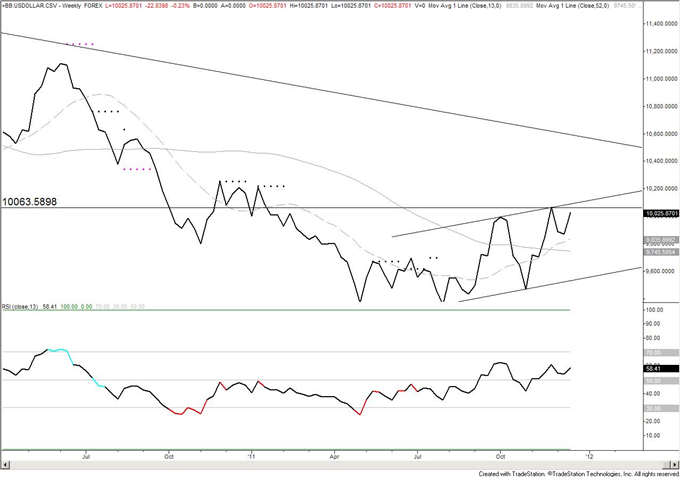 Jamie – The Dow Jones FXCM Dollar Index (Ticker: USDOLLAR) is putting highs from the last several months to the test. In the event of a break higher, focus shifts to the channel resistance and the January (and 2011) high at 10254). In fact, 10254 is also the 100% extension of the rally from the August low. Having held support from the former 4th wave at 10005, near term expectations are for one more high (above 10090) before corrective weakness takes hold. 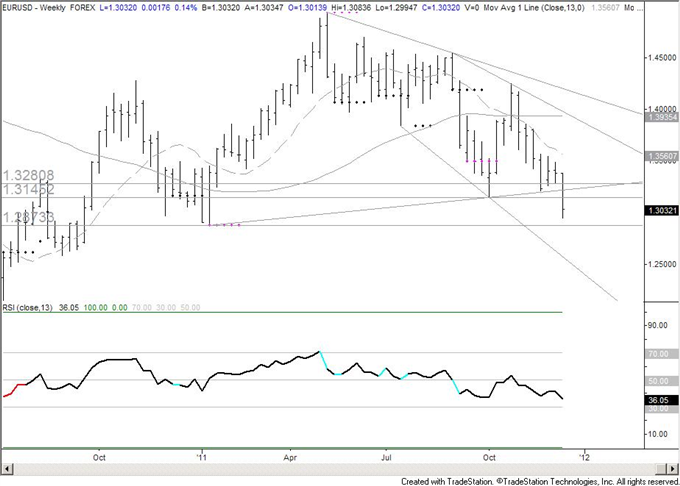 Jamie – The EURUSD has dropped below the October low (13143), which shifts focus to the January and 2011 low at 12858. A drop below there would encounter a potential channel and downward sloping trendline below 12800. Not to be overlooked is the break of the neckline from the year + head and shoulders top. 13145-13280 is the resistance zone on pullbacks but that zone is unlikely to see a test for at least a week. 13065-13100 resistance has held so far and I favor a test of the 2011 low before an intense rally to finish the year (in order to relieve extreme sentiment).

Joel – The market has finally taken out the key October lows at 1.3145 to confirm a lower top by 1.3550 and open the next downside extension towards the 2011 lows from January at 1.2870. Daily studies are however looking a little stretched and at this point we could see some corrective action before the market resumes its downward trajectory. Look for any rallies to be well capped in the 1.3300 area from where the next lower top will be sought out. 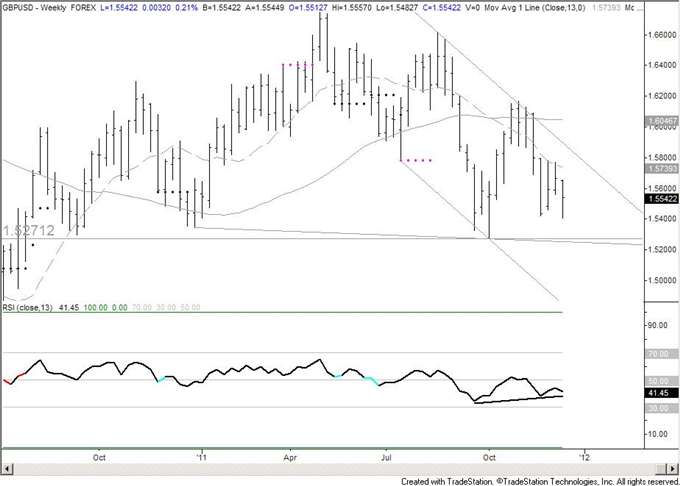 Jamie – The GBPUSD is holding up well after testing the November low on Wednesday. Still, the trend is considered down against the December high (15770) price is nearing probable resistance from the 12/6 low and 20 day average at 15560/80. A drop below 15271 would confirm the 13 month head and shoulders top but could also complete a leading diagonal from the April high.

Joel – Rallies have been very well capped ahead of 1.5800 and it looks as though a lower top has now been carved out by 1.5780 ahead of the next major downside extension back towards the October lows at 1.5270. Key support comes in by 1.5400 and a daily close below this level will be required to confirm bias and accelerate declines. Ultimately, only back above 1.5780 would negate bearish outlook and give reason for pause. 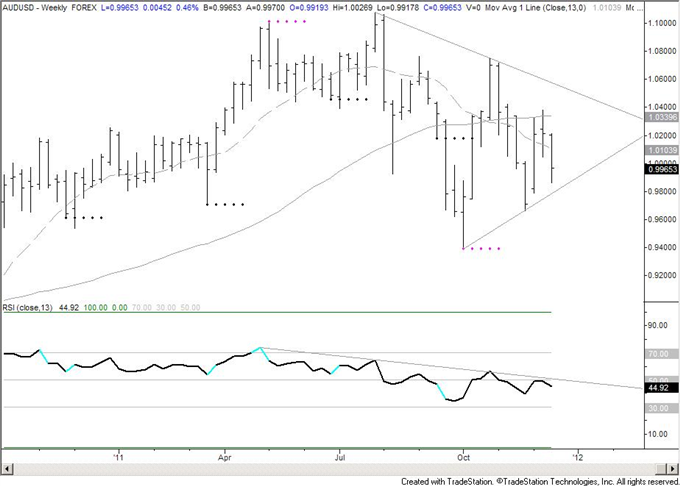 Jamie – The best bet for AUDUSD is a triangle or flat from the October low (with the current rally from the November low as wave C). Near term, a test of the gap from the 11/28 open (and trendline) is still favored in the 9775-9800 area as long as price is below 10030. A larger rally is then expected to commence and eventually exceed 10377. So I remain bearish but do expect to turn bullish next week.

Joel – Any rallies are classified as corrective and we continue to see this market in the process of carving out a major top ahead of the next downside extension back below the critical lows from October at 0.9385. The latest bout of consolidation has been broken and it now looks as though a fresh lower top is attempting to establish by 1.0380 following the break back below parity. Look for an acceleration of declines from here towards 0.9660 which guards against the critical October lows at 0.9385. Ultimately, only back above 1.0380 would delay outlook. 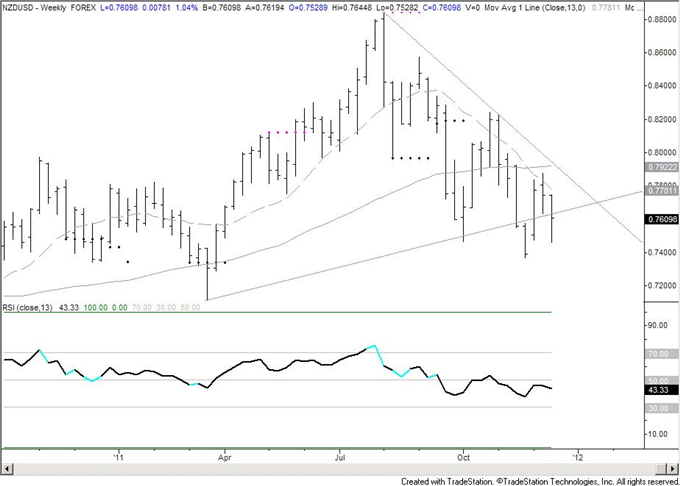 Jamie –A NZDUSD low appears to be in place at 7460. The rally through 7609 negates bearish structure from 7878. What’s more, examination of the rally from 7460 reveals an impulsive structure. I favor buying dips into 7550. Keep an eye on both the AUDUSD and NZDUSD as the next few sessions unfold. A new low in AUDUSD and NOT in NZDUSD would signal a divergence typically seen at market turns.

Joel – This market remains under intense pressure and has once again been aggressively sold into the latest rally towards 0.8000. From here, we look for the formation of the next lower top by 0.7880 to be confirmed ona break back below 0.7370 over the coming sessions. Below 0.7370 should then accelerate towards next key support at 0.7110 further down. Ultimately, only back above 0.7900 would negate. 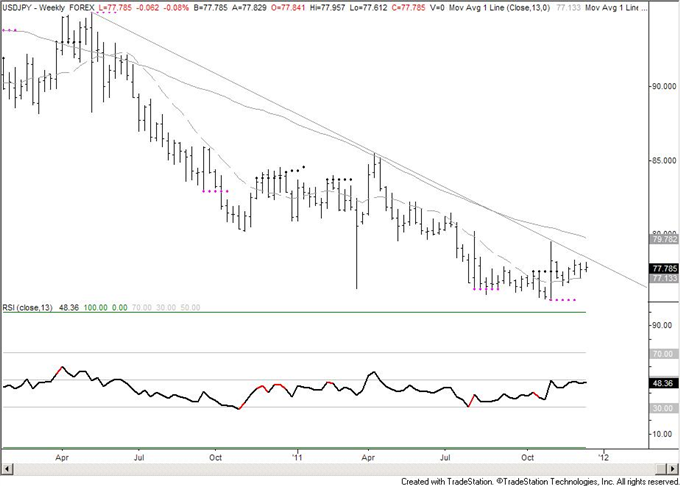 Jamie – The longer that the USDJPY fails to accelerate higher, the less confident I am in a bullish bias. Also, volatility is exceptionally low (3 month vol is lowest since November 2007), which is historically bearish. Price does remain below the 200 day average, which is now below the post intervention high of 7953. I am treating 7828 and 7714 as breakout levels (above 7728 is bullish and below 7714 is bearish).

Joel – The market has managed to successfully hold above the bottom of the daily Ichimoku cloud to further strengthen our constructive outlook and we look for the formation of a inter-day higher low by 76.55 ahead of the next major upside extension back towards and eventually through the recent multi-day highs by 79.55. Ultimately, only a close back below the bottom of the Ichimoku cloud would negate outlook and give reason for pause, while a daily close back above 78.30 accelerates. 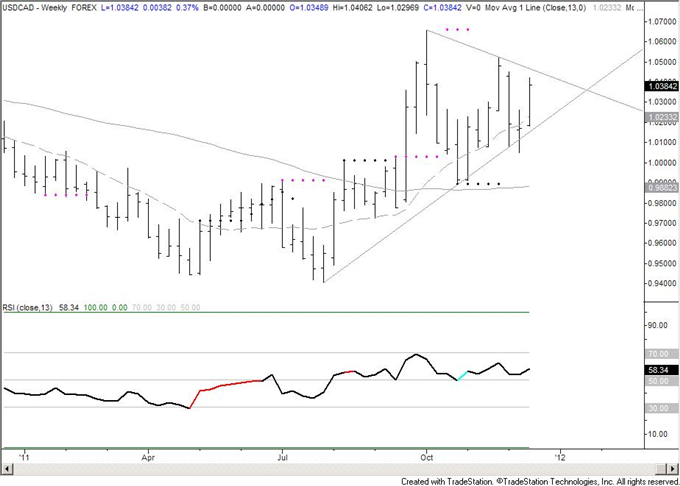 Jamie – A well defined trendline has characterized the trend since August. After sliding just below the trendline, the USDCAD has rocketed higher and price is nearing triangle resistance in the mid 10400s. Pattern wise, a triangle may be underway from the October high. The decline from the November high would compose wave C with the current rally composing wave D. A push above 10525 would require a reassessment and suggest that something more bullish is underway.

Joel – Our constructive outlook remains intact with the market focused on a retest of the key October highs by 1.0660. From here, look for any interday pullbacks to be very well supported above 1.0000 on a daily close basis, in favor of an eventual break and fresh upside extension beyond 1.0660. Initial resistance comes in at 1.0525. Back above 1.0660 open a fresh upside extension towards 1.1000. 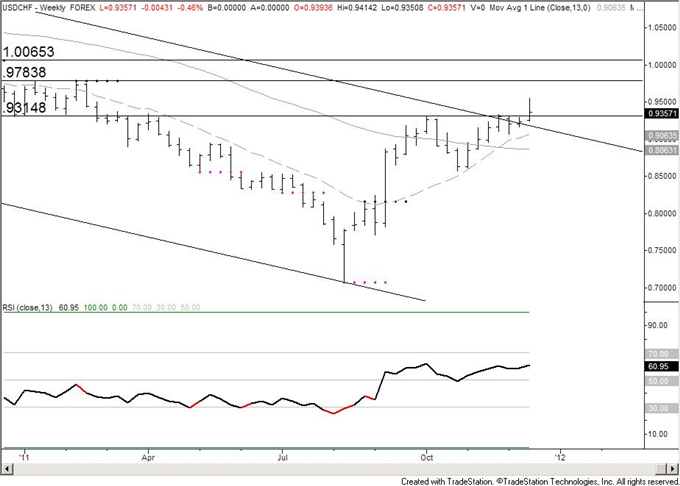 Jamie – The USDCHF carved out a key reversal Thursday but the decline is corrective and fits as a 4th wave correction within the 5 wave pattern from 9064. Price is holding the Elliott channel and former 4th wave support (9342) as well. The implications are for a final high (above 9546) before a larger decline. 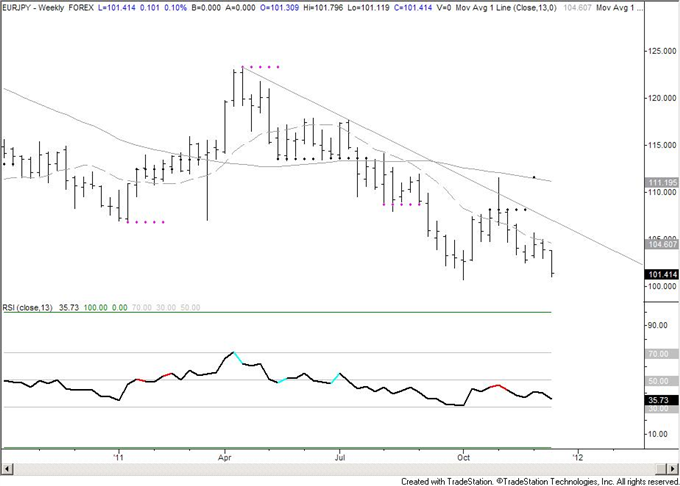 Joel – The latest break back below the daily Ichimoku cloud delays any hopes for a meaningful recovery on the cross and opens the door for a more significant decline back down towards critical support by the recently established multi-year lows at 100.75. At this point, a break back above 105.70 will be required to alleviate immediate downside pressures. Below 100.75 opens a direct test of critical psychological barriers at 100.00. 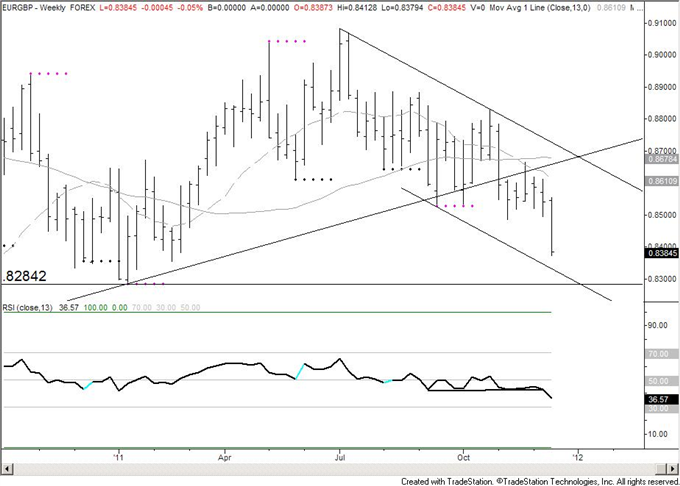 Jamie – EURGBP focus remains lower into the January low at 8284. Near term, a triangle may be unfolding from 8372 as a small 4th wave (resistance above 8424 is 8440). A drop into a new low would likely be followed by additional consolidation and yet another leg lower (series of 4th and 5th waves).

Joel – The cross is in the process of breaking down with the market establishing below key psychological barriers at 0.8500 and now eying a retest of the 2011 lows from January by 0.8285. However, daily studies are starting to look stretched so we would not rule out the possibility for a bounce back towards 0.8500 before the market considers an assault on 0.8285.