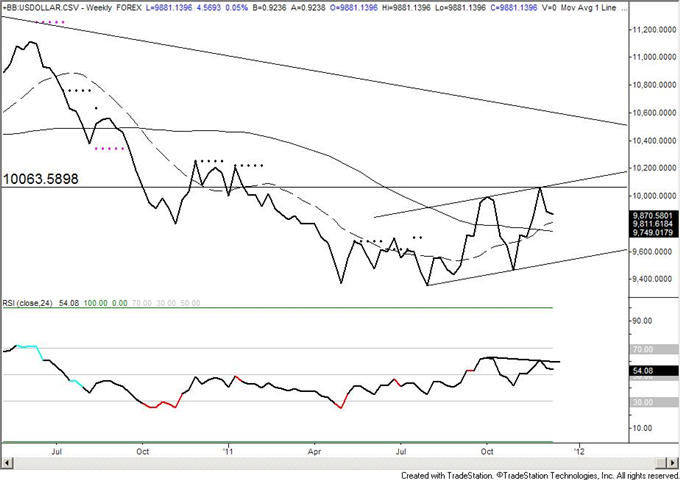 Jamie – The Dow Jones FXCM Dollar Index (Ticker: USDOLLAR) has plunged below a steep trendline support and reached early November highs (now support). The velocity of the decline certainly warrants questioning of the larger trend, especially in light of the divergence with RSI on the weekly (see video for more on this). Watch 9900 for resistance, which intersects a short term trendline.

Joel – T he market is expected to remain very well supported on dips after showing some clear signs of a material base in the previous month. Key previous multi-week range resistance turned support was successfully defended in the 9,400 area, and from here, we look for a fresh medium-term higher low ahead of the next major upside extension back through 10,135. Ultimately, only a close back below 9,400 would give reason for concern, while intraday setbacks should find fresh bids towards 9,800. 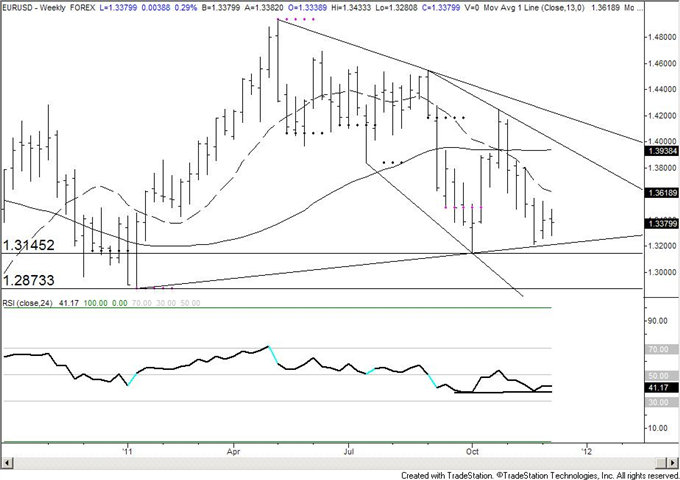 Jamie – There are times when one can take a position with confidence – when the 3 tenants of technical analysis, pattern, momentum, and sentiment all line up one direction. Right now is not one of those times as sentiment is extreme (which warns of a bounce) but pattern is not especially clear. A scenario in which price drops below the November low and perhaps the October low before staging a recovery is certainly possible. The EURUSD could also stay in its 13210-13550 range. The 20 day average and short term trendline define the near term trend. Bottom line, I am not bearish at these levels and suggest range strategies but think we could be in for surprises to the upside through the end of the year.

Joel – The latest corrective rally appears to have stalled out by 1.3550 and the market looks poised for a bearish resumption to challenge the critical October lows at 1.3145. A break below 1.3145 is significant and will open the door for deeper setbacks over the coming weeks and months into the lower 1.2000 region. Ultimately, only a daily close back above 1.3550 will negate outlook and give reason for pause. 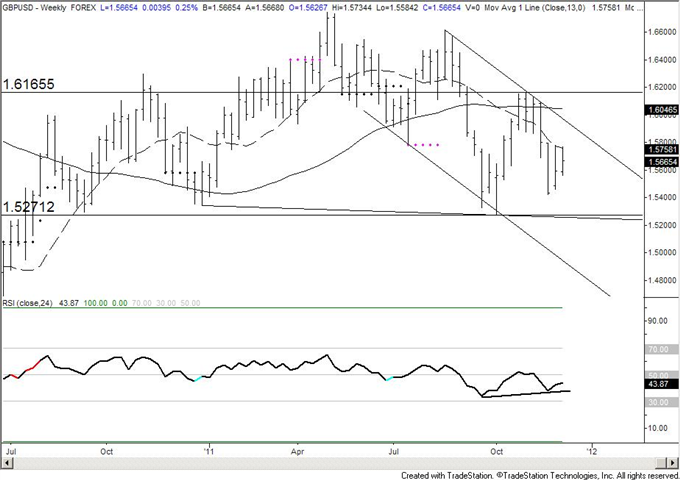 Joel – The market correction out from the recent lows at 1.5420 appears to have finally stalled out and we will be looking for a daily close back under 1.5560 to confirm bias and accelerate declines. A close below 1.5560 should accelerate declines towards 1.5420, below which will open an even deeper setback to retest critical support by the October lows at 1.5270. Ultimately, only back above 1.5800 would delay and give reason for concern. 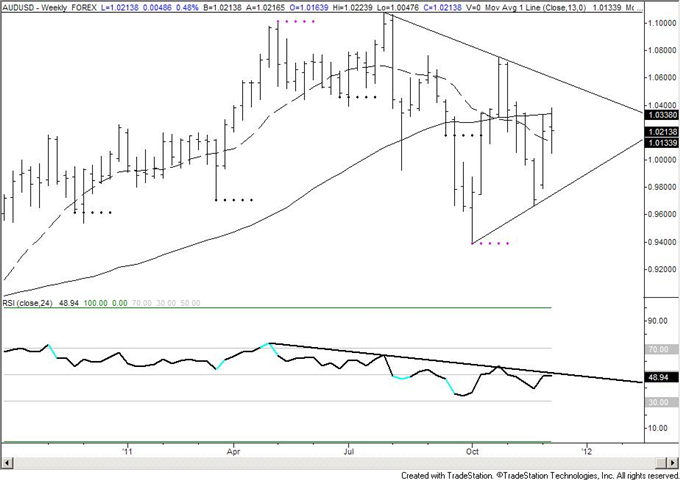 Jamie – The structure of the decline from this morning’s high will give us an idea as to the larger trend. At this point, the best bet is a triangle or flat from the October low (with the current rally from the November low as wave C). Having held the 20 day average overnight, focus is on resistance at 10230-70. Yesterday’s key reversal ahead of the 200 day average is enough evidence for me to be bearish on rallies, targeting the trendline that extends off of the October and November lows near 9800 next week. Exceeding 10380 would shift focus to 10450 (early November pivots) and the trendline near 10500.

Joel – Any rallies are classified as corrective and we continue to see this market in the process of carving out a major top ahead of the next downside extension back below the critical lows from October at 0.9385. The latest bout of consolidation has been broken and it now looks as though a fresh lower top is attempting to establish by 1.0380 following the break back below 1.0270. look for an acceleration of declines from here back below parity and towards 0.9660 which guards against the critical October lows at 0.9385. Ultimately, only back above 1.0380 would delay outlook. 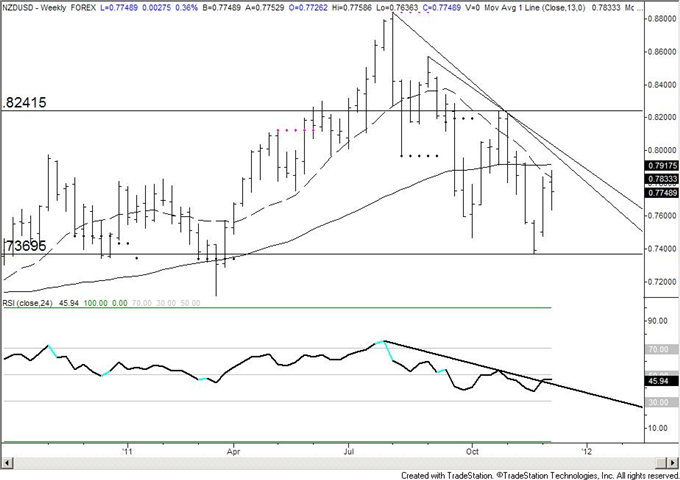 Jamie –The near term NZDUSD pattern is the exact same as the AUDUSD in that both made daily key reversals yesterday and held their 20 day averages overnight. 7760/90 is now resistance. Downside levels of interest are 7575 and the November low at 7370. Exceeding 7875 would expose the trendline that extends off of the August and October highs.

Joel – Any rallies are classified as corrective, with the market still locked within a well defined downtrend. As such, we would expect to see the latest bounce well capped below 0.7900 on a daily close basis in favor of the next major downside extension back towards and eventually below 0.7370. Ultimately, only a daily close back above 0.7900 would delay outlook and give reason for pause. 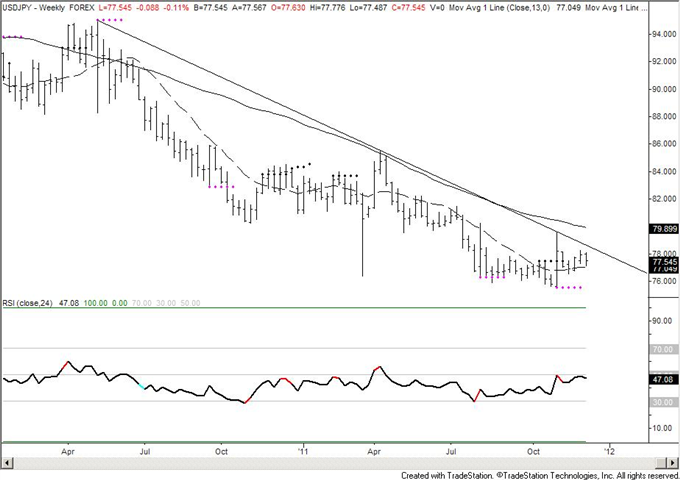 Jamie – There are signs that the long term USDJPY trend is reversing (from down to up). Those signs include bullish RSI divergence at the October low and a positive slope on the 13 week average. A push through the trendline that has defined the trend since the May 2010 high is required in order to inspire confidence in the upside. The USDJPY did take out the short term trendline this morning but is holding the 20 day average (daily closing basis). As long as 7656 (November low) is intact, I’ll continue to view the USDJPY in a constructive manner.

Joel – The market has managed to successfully hold above the bottom of the daily Ichimoku cloud to further strengthen our constructive outlook and we look for the formation of a inter-day higher low by 76.55 ahead of the next major upside extension back towards and eventually through the recent multi-day highs by 79.55. Ultimately, only a close back below the bottom of the Ichimoku cloud would negate outlook and give reason for pause, while a daily close back above 78.30 accelerates. 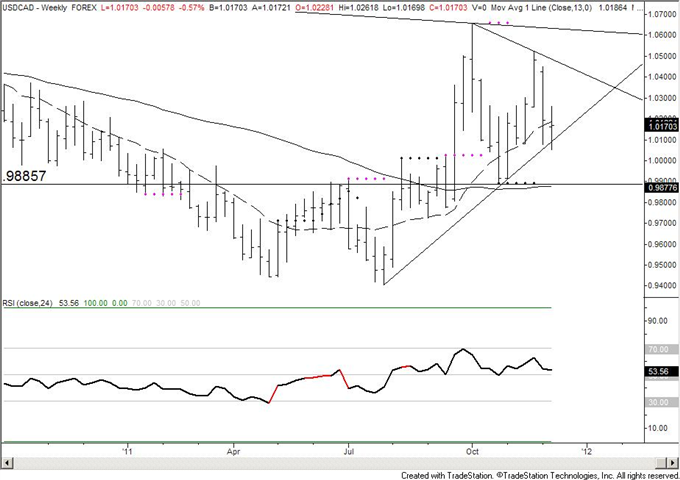 Jamie – A well defined trendline has characterized the trend since August. After sliding just below the trendline, the USDCAD has rocketed higher but former support at 10257 and the 20 day average at 10260 have held as resistance. A push through there exposes 10362. Pattern wise, a triangle may be underway from the October high. The decline from the November high would compose wave C. Yesterday’s key reversal points to gains next week. Support is 10135 towards triangle resistance in the mid 10400s.

Joel – Despite the recent pullbacks, our constructive outlook remains intact with the market focused on a retest of the key October highs by 1.0660. From here, look for any interday pullbacks to be very well supported above 1.0000 on a daily close basis, in favor of an eventual break and fresh upside extension beyond 1.0660. Thursday’s daily close back above 1.0225 confirms and should now accelerate towards our 1.0660 objective. 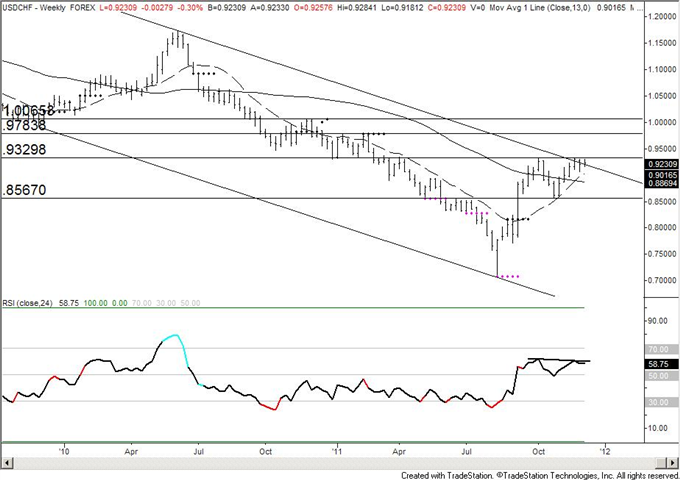 Jamie – The USDCHF is at long term resistance from “the channel that extends off of the 2009 and 2011 lows (with the parallel extending from the 2010 high). This channel resistance is reinforced by pivots (both support and resistance) from December 2010 to April 2011.” This is clearly an important long term level, which would make a break above even more impressive. Support is strong at today’s low from the 20 day average and multi month trendline.

Joel – The recent break above the critical October highs at 0.9315 is significant and now opens the door for the next major upside extension over the coming weeks back towards parity. Daily studies are looking slightly stretched at current levels, so we would not rule out the potential for some corrective selling, but ultimately, look for any setbacks to be well supported in the 0.9000 area, where a fresh higher low is sought out. 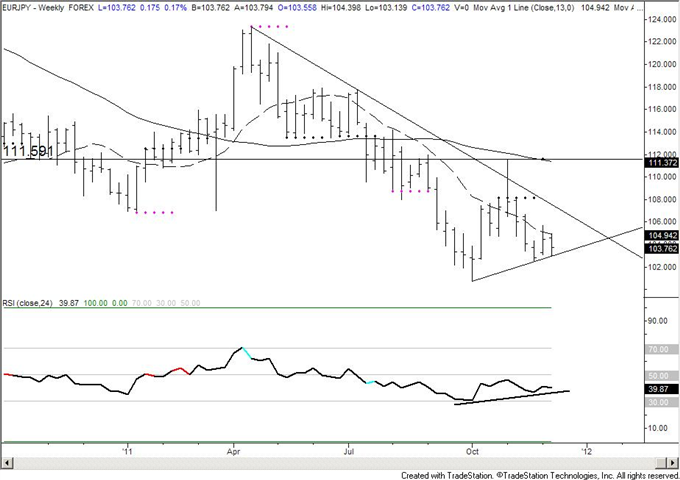 Jamie – The long term trend must be considered down as long as price is below 11155 (October high) but the higher lows since the October low has me thinking that a large triangle may be unfolding. It is too early to make this statement with confidence but worth keeping in your mind as long as price is above 10247. A drop below there would shift focus to the October low and a pop above 10566 would give way to 10673 and 10825. These levels were resistance in November.

Joel – The latest break back below the daily Ichimoku cloud delays any hopes for a meaningful recovery on the cross and opens the door for a more significant decline back down towards critical support by the recently established multi-year lows at 100.75. However, there is some evidence of a bullish reversal following some constructive price action in the previous week, but a break and close back above 105.70 would be required to negate bearish outlook and relieve immediate downside pressures. 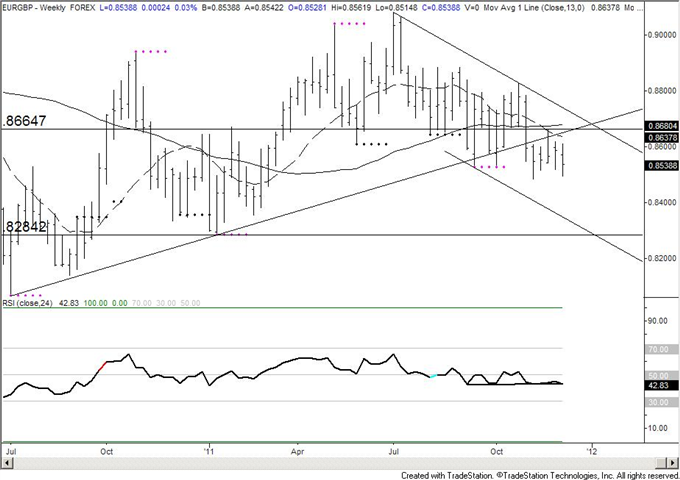 Jamie – The break of a year and a half trendline in the EURGBP shifts focus to a developing channel and former long term resistance trendline. These lines intersect in early 2012 near the 2011 low of 8285. The bounce last week has nearly been entirely retraced as the confluence of the 13 and 52 week averages and October breakdown level held strong. Use last month’s high (8663) as risk on shorts. Focus remains on the 2011 low below 8300.

Joel – Remains locked in a choppy multi-day consolidation with no sign of a breakout in either direction just yet. As such, selling rallies above 0.8800 and buying dips towards 0.8500 is the preferred strategy.