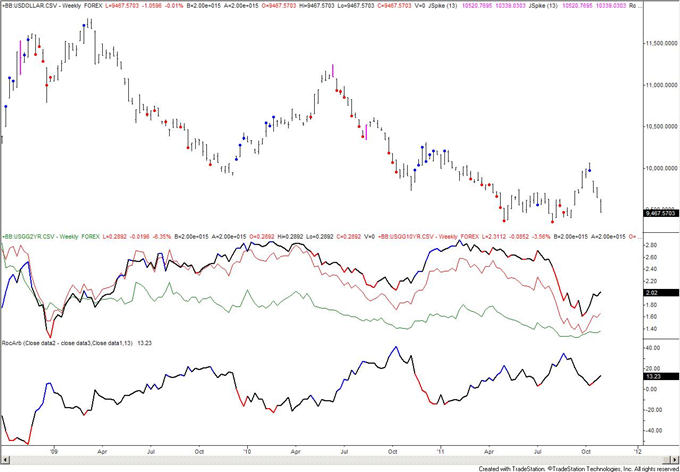 Australian Dollar on Pace for Largest Monthly Rally in History

Jamie – The Dow Jones FXCM Dollar Index (Ticker: USDOLLAR) is has plummeted into steep channel support and focus is now on a measured level at 9375 (decline from top would consist of 2 equal legs). The July low at 9323 is the line in the sand as far as the larger USD recovery story is concerned and I’ve presented an alternate view here (rally from May is A-B-C and a new low would be registered).

Joel – The market is expected to remain very well supported on dips after showing some clear signs of a material base in the previous month. Key previous multi-week range resistance now turned support is being tested on the pullback into the 9,400 area, but we expect any additional declines to be very well supported well above 9,400 on a daily close basis in favor a fresh medium-term higher low and next major upside extension back through 10,135. Ultimately, only a close back below 9,400 would give reason for concern. 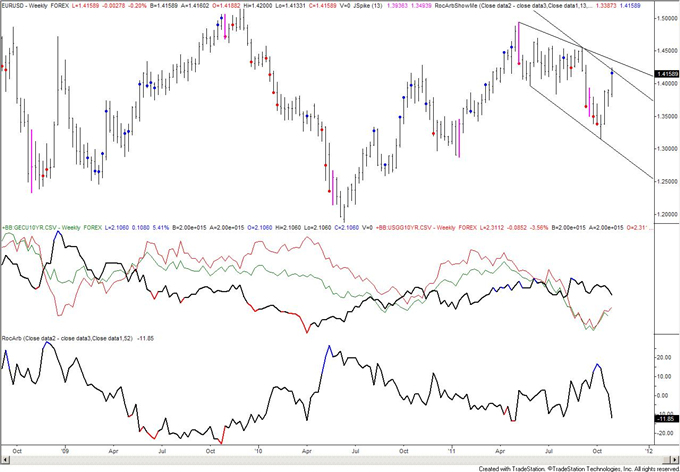 Jamie – The EURUSD closed right at its channel resistance yesterday (A-C line extended from B). I cannot stress enough at this point however that the decline from the May high is left as 3 waves therefore we should respect upside potential in the coming weeks and perhaps longer. Extreme rates of change (yesterday) are consistent with 3rd waves so treat weakness over the last day as a 4th wave. Support is expected at 14075-14110. Upside levels of interest are 14326 and 14422.

Joel – It has been very difficult to retain a bullish USD outlook in the short-term, with the Euro rallying so aggressively in the month of October. However, we continue to take our cues from the longer-term monthly chart which shows a different picture and significantly mitigates the USD beating on the daily chart. The monthly chart shows the market in a downtrend off of the record highs from 2008 and in the process of carving the next lower top ahead of a move back towards the 1.2000 area. Despite the latest surge in October, the price is still holding below September’s high and we look for gains to stall out somewhere ahead of 1.4390 in favor of a bearish resumption. Ultimately, only back above 1.4390 would delay and give reason for concern. 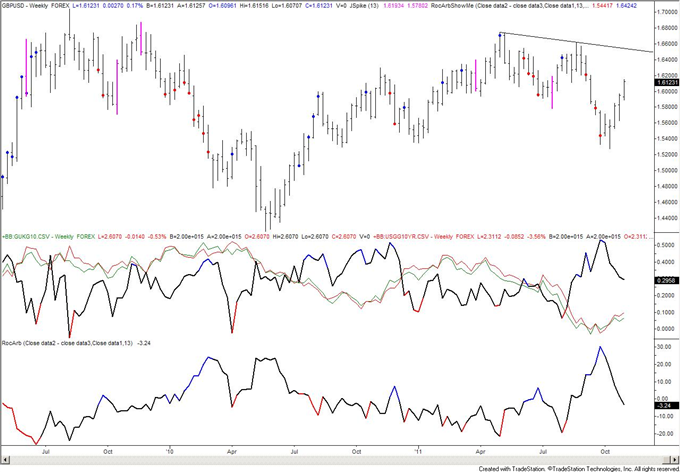 Joel – The market has finally reached the major double bottom objective just over 1.6100 that was triggered on the break of neckline resistance at 1.5715 back on October 12. From here, scope is for a resumption of what we believe to be a broader downtrend and we expect the 200-Day SMA, which coincides with the double bottom objective, to cap gains on a daily close basis ahead of the next major downside extension. Look for a break back below 1.5950 to confirm and accelerate, while only a close above the 200-Day SMA negates. 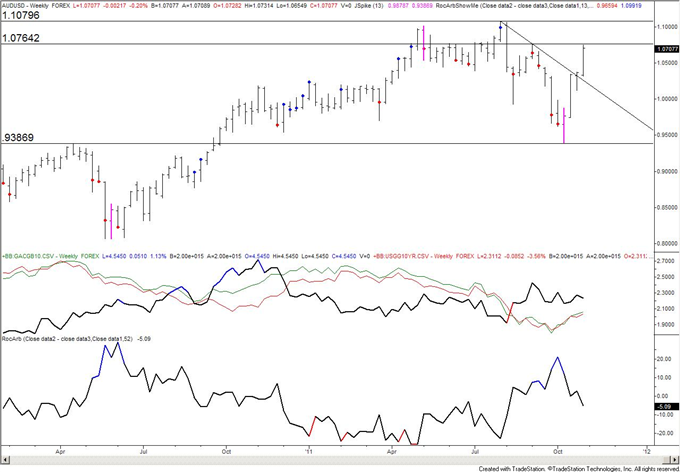 Jamie – Allowing for consolidation / weakness into 10645 or even 10600, respect the potential for additional gains towards 10910 or even 11079 (free floating record). An extended advance above the August high of 11078 cannot be dismissed as the decline from that level is left as a 3 wave drop.

Joel– Our core bearish outlook is being tested with the market rallying significantly beyond 1.0500 to trade just shy of the previous lower top from August at 1.0765. However, we still hold onto our bias, and will look for the market to stall out above 1.0700 in favor of an aggressive bearish resumption back below parity into November. Back above 1.0750 will concern and a close above the level will negate the outlook. Initial support comes in by 1.0500. 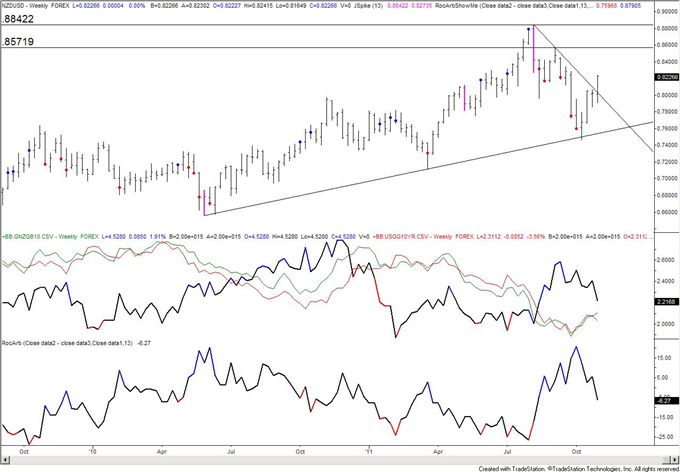 Jamie –The NZDUSD has broken through its channel and the decline is left as a 3 wave affair. The implications are for a rally that eventually exceeds the August high. 7914 serves as the pivot (above is bullish) and focus is now on the 9/16 high of 8341. Near term supports are 8145, 8120, and 8090.

Joel –Any rallies are classified as corrective, with the market still locked within a well defined downtrend. As such, we would expect to see the current bounce well capped below 0.8250 on a daily close basis in favor of the next major downside extension back towards and eventually below 0.7465. Ultimately, only a daily close back above 0.8250 would delay outlook and give reason for pause. 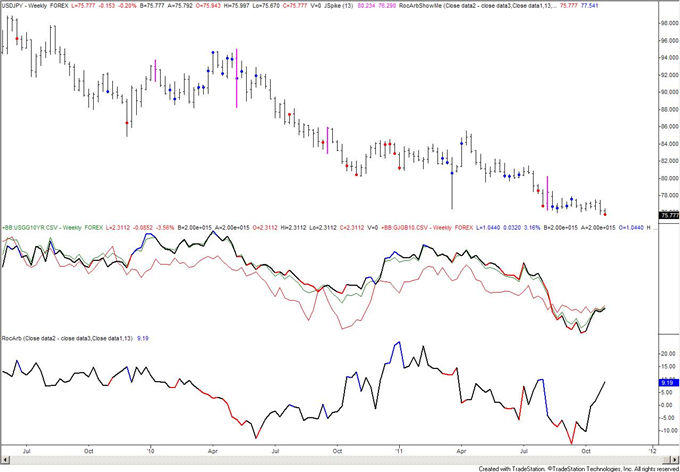 Jamie – The USDJPY has finally broken down, confirming the 5th wave interpretation. Look lower towards the measured 7400 level. I plan on playing an early November (bullish) reversal. Previous - “The sharp advance may be the beginning of the end of the wave 4 correction that has been unfolding since August. Currently testing Elliott channel resistance, 7784 is also resistance. As long as price is below 7956, I favor a top, reversal and decline to all time lows in order to complete 5 waves down from April.”

Joel – Although the market remains largely continues to trade around the 76.00 figure, the recent break to fresh record lows below the figure suggests that we still could see additional weakness before any meaningful recovery rally. At this point, a break back above 78.00 will officially be required to alleviate immediate short-term downside pressures, while back below 75.50 will accelerate declines towards major psychological barriers at 75.00. 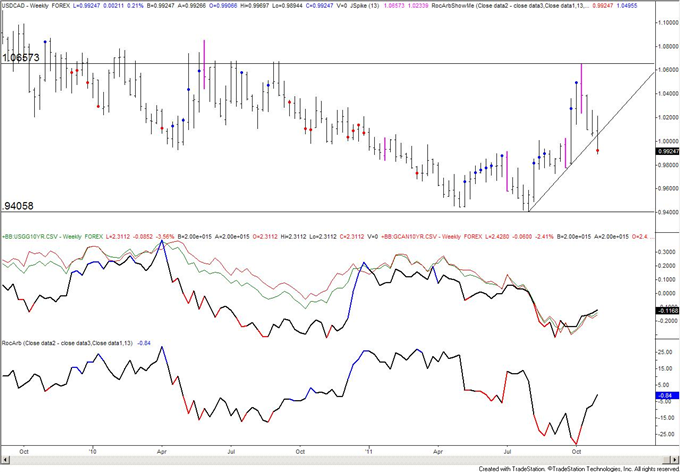 Joel– The latest setbacks have been rather aggressive and are currently testing some previous major resistance turned support by 0.9900-1.0000. However, we still retain a constructive outlook and look for the formation of a fresh higher low ahead of the next major upside extension back towards and eventually above 1.0660. Ultimately, only a daily close back below 0.9900 gives reason for concern, while above 1.0260 should confirm bias and accelerate. 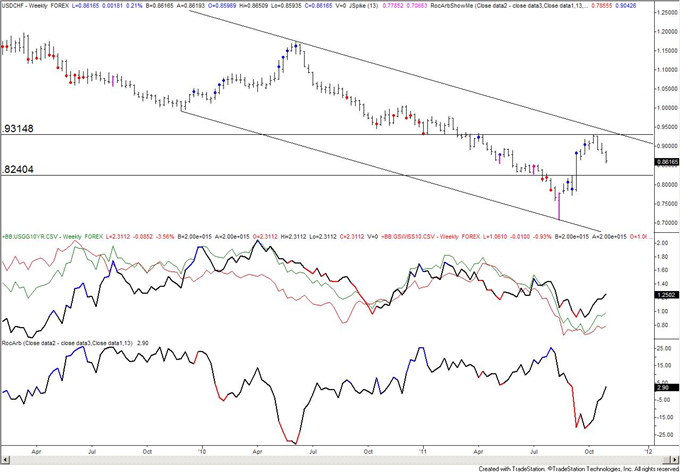 Jamie – “Bigger picture, the USDCHF rally from the August low has that 5 wave look. While each wave might not be ‘perfect’ in its individual construction, the point is that a countertrend move should be expected.” The countertrend decline is well underway and a head and shoulders objective rests at 8465. Former resistance at 8420 is also of interest.

Joel – The market has been in the process of a major correction since peaking out at 0.9315 on October 6. However, the overall outlook remains constructive, with the pair looking like it is in the process of carving a major base ahead of some major upside over the coming weeks and months. Look for the current round of setbacks to be well supported in the 0.8500 area from where a fresh medium-term higher low is sought out ahead of a bullish resumption back towards and eventually through 0.9315. Ultimately, only a weekly close below 0.8500 would concern. 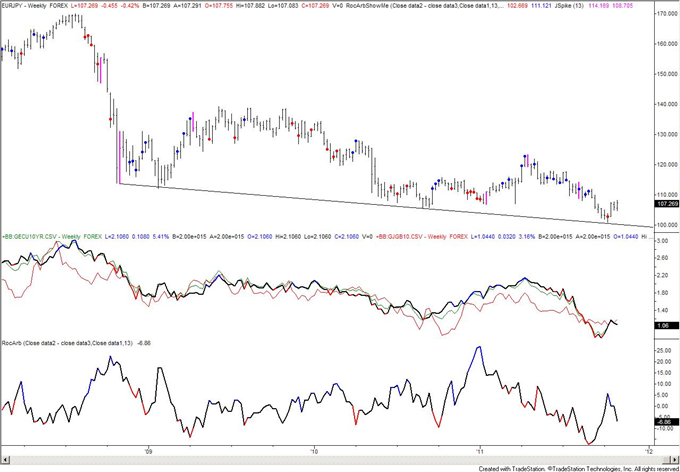 Jamie – I wrote Wednesday that “the thrust lower appears to have been from a b wave triangle thus focus has shifted higher towards 10650 and ultimately the high above 10750. A trendline that extends off of the April and July highs then comes into play near 11000.” Stay focused on the trendline (now closer to 10900) but a more bullish outcome seems likely as additional strength would confirm a head and shoulders bottom pattern. A Fibonacci objective rests at 11163 (near the late August high of 11195). 10640/80 serves as support.

Joel – The latest break back above 108.00 is significant in the short-term and confirms a fresh higher low by 104.75 ahead of the next upside extension. Look for gains to now extend into the 111.00 area over the coming days, while only back under 104.75 would compromise outlook and give reason for pause. 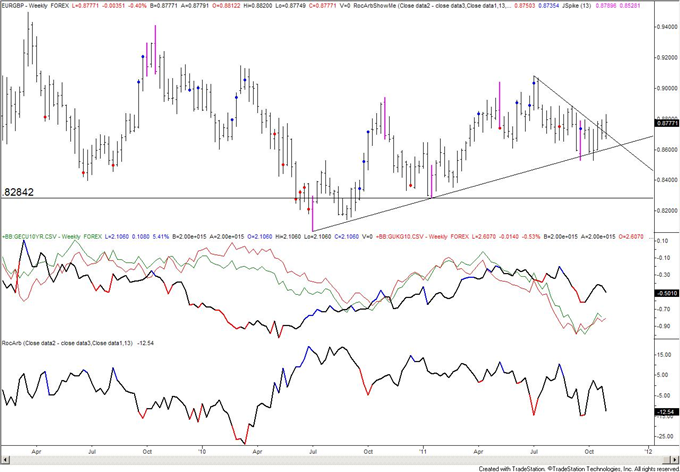 Jamie – Yesterday’s EURGBP rally is viewed as the beginning of the next bull leg that began in September. Focus over the next few weeks and months is the August high at 8884 and the 100% extension of the rally from the low at 8936. The channel also comes into play. 8745/70 is near term support and the upside is favored above 8669.

Joel – Remains locked in a choppy multi-day consolidation with no sign of a clear directional breakout in either direction just yet. As such, selling rallies above 0.8800 and buying dips below 0.8600 is the preferred strategy. Latest rally above 0.8800 should therefore be sold and only back above 0.8900 negates.