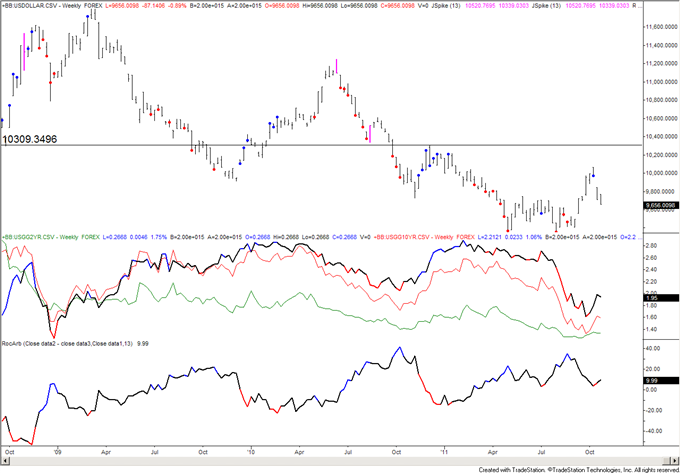 Jamie – The Dow Jones FXCM Dollar Index (Ticker: USDOLLAR) has broken down but the drop may be from a triangle and therefore terminal. Levels to watch for support are the 61.8% retracement of the rally from the July low at 9634, the measured triangle breakout level at 9579 and former resistance at 9536.

Joel – The market remains very well supported on dips and is showing some clear signs of a material base. Key multi-week range resistance has been broken by 9,750 and this solidifies the prospects for a major bottom and should now open the door for fresh upside towards the 10,500 area over the medium-term. In the interim, current inter-day pullbacks should now be well supported by previous resistance turned support in the 9,700 area. 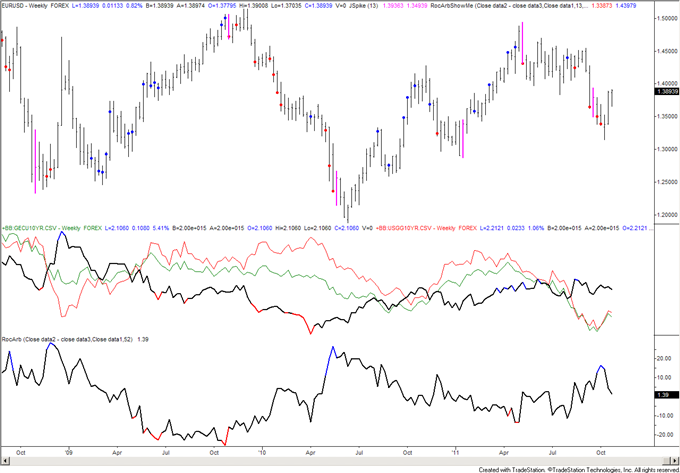 Jamie – The EURUSD has soared from the bottom of its recent range to the top of the range over the last day. That sentence makes clear that the EURUSD is still in a range. Only a break above the mid September pivot of 13937 would negate the range and give scope to an extension towards the channel near 14200. Interim resistance would be expected at 14050/85 (former low and 200 day average).

Joel – Rallies have stalled out just over 1.3900 and ahead of 1.4000 into this latest bout of consolidation. From here we see risks for the formation of a fresh lower top by 1.3915 ahead of the next major downside extension back towards and eventually below 1.3145. Look for a break back below 1.3650 to confirm and accelerate. Back above 1.3915 delays. 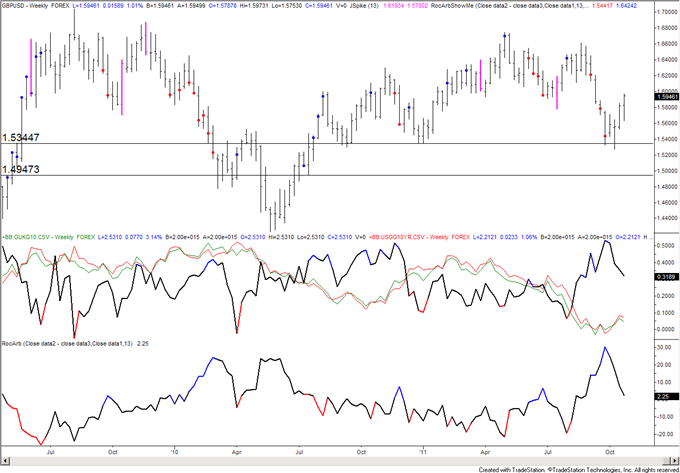 Jamie – The GBPUSD has roared higher into the 50% retracement of the decline from the August high. The breakout level is now support at 15850 and focus has shifted higher towards the 61.8% retracement and 200 day average at 16100/30.

Joel – The market has been well bid since breaking the neckline of a double bottom at 1.5715, with rallies extending into the 1.5800’s thus far ahead of the latest minor consolidation. However, with the underlying trend still tilted to the downside, we see the risks for the formation of a lower top somewhere around current levels ahead of the next major downside extension below 1.5270. Look for a break and daily close back below 1.5630 to confirm bias and accelerate declines. A daily close above 1.5900 delays. 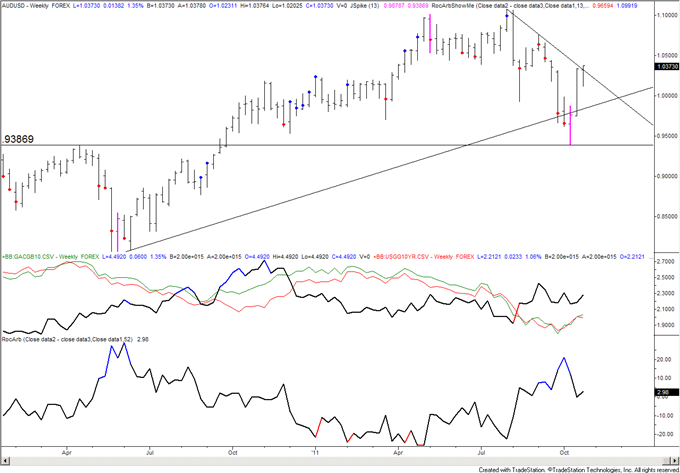 Jamie – The AUDUSD continues to test the well defined channel from the August high. The level is bolstered by the 200 day average. As such, a break higher would demand that much more respect and focus would shift higher into 10480 (former support). Near term support comes in at 10300 and 10260. A dip would present an opportunity to get long against the range low for continuation of the monthly trend (which is clearly up).

Joel– Any rallies are classified as corrective, with the market still locked within a well defined downtrend. As such, we would expect to see the current bounce well capped below 1.0500 on a daily close basis in favor of the next major downside extension back towards and eventually below 0.9385. Ultimately, only a daily close back above 1.0500 would delay outlook and give reason for pause. A daily close back below 1.0115 confirms outlook and should accelerate declines. 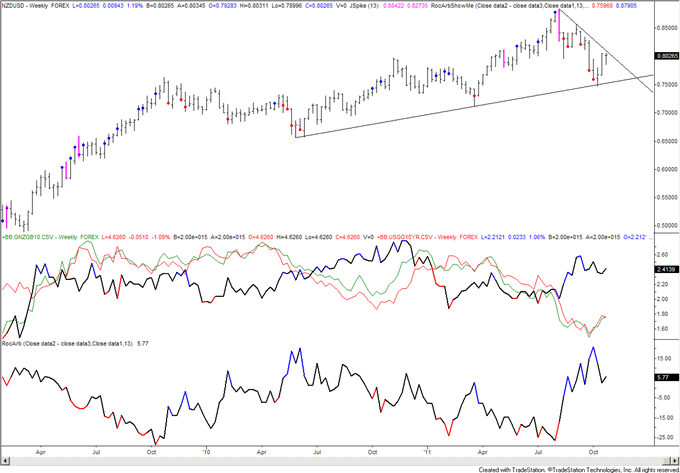 Jamie –The NZDUSD is lagging the AUDUSD as the same trendline (off of the August and September highs) isn’t until the mid 8100s. Mid September support at 8117 reinforces this level as one of interest this week. The rally from the low would consist of 2 equal legs at 8130 and the 61.8% retracement of the decline from 8571 is 8150. Bottom line, mid 8100 should be strong resistance if reached. It is worth noting that the 200 day average is currently acting as resistance.

Joel –Any rallies are classified as corrective, with the market still locked within a well defined downtrend. As such, we would expect to see the current bounce well capped below 0.8100 on a daily close basis in favor of the next major downside extension back towards and eventually below 0.7465. Ultimately, only a daily close back above 0.8200 would delay outlook and give reason for pause. A daily close back below 0.7860 confirms outlook and should accelerate declines. 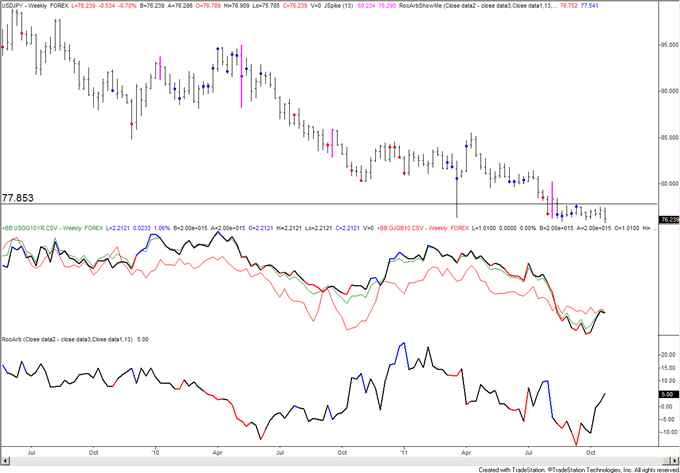 Jamie – The USDJPY has finally broken down, confirming the 5th wave interpretation. Look lower towards the measured 7400 level. I plan on playing an early September reversal. Previous - “The sharp advance may be the beginning of the end of the wave 4 correction that has been unfolding since August. Currently testing Elliott channel resistance, 7784 is also resistance. As long as price is below 7956, I favor a top, reversal and decline to all time lows in order to complete 5 waves down from April.”

Joel – Has been locked in an intense consolidation over the past several weeks, since breaking to fresh record lows by 75.95, and while we would not rule out the possibility for a continuation of the downtrend, any additional declines are seen as limited. Longer-term technical studies are looking stretched and we anticipate the formation of a major base in favor of an intense upside reversal. Look for a break back above 77.90 to confirm outlook and accelerate. In the interim, any dips towards 75.00 are viewed as an excellent and compelling buy opportunity. 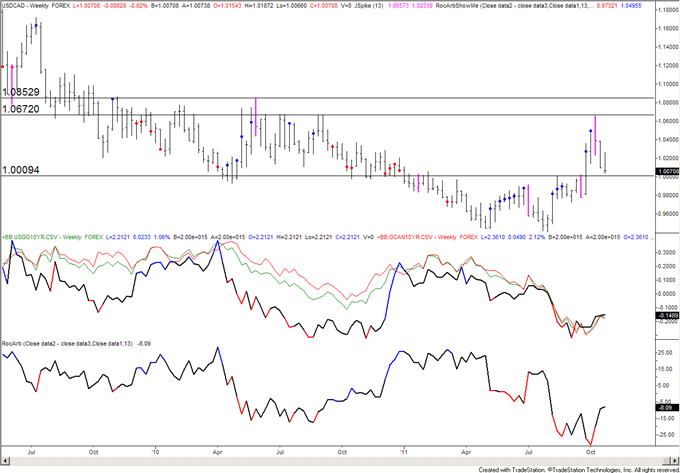 Jamie – Confidence in the bullish USDCAD count I’ve been following is low but does remain valid as long as price is above 10007. A drop below this level (along with the trendline drawn off of the July and September lows) would shift focus to the middle of the August congestion near 9900.

Joel– The latest setbacks have finally managed to stall out just ahead of some previous major resistance turned support by parity, and it looks as though the market could finally be ready to put in a fresh higher low ahead of the next major upside extension back towards and eventually above 1.0660. Ultimately, only back below parity gives reason for concern, while above 1.0260 should confirm bias and accelerate. 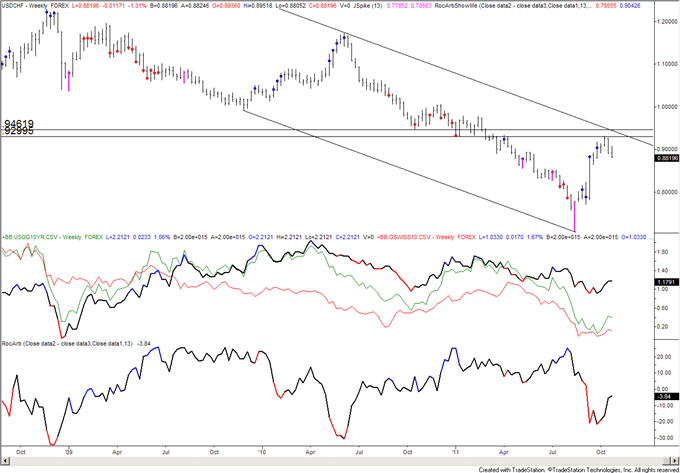 Jamie – “Bigger picture, the USDCHF rally from the August low has that 5 wave look. While each wave might not be ‘perfect’ in its individual construction, the point is that a countertrend move should be expected. Zooming in, the rally from 8880 consists of 3 waves so a drop below that level should be respected. Focus would shift to 8640.” 8880 gave way so look lower.

Joel – The market is in the process of consolidating its latest sharp recovery out from record lows by 0.7000. Although there are some risks over the short-term for deeper setbacks, any declines should be very well supported on a close basis above 0.8645. Back above 0.9315 will signal an end to the consolidative price action and confirm a fresh higher in place ahead of the next major upside extension back above parity. Ultimately, only a close back below 0.8500 would give reason for concern. 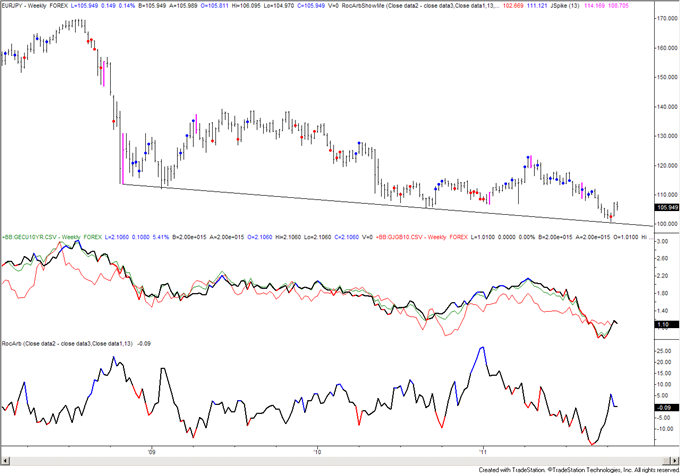 Jamie – The 5 wave EURJPY rally from the October low demands that we consider a longer term constructive view but the decline from 10769 and subsequent advance is best counted as waves a and b of a 3 wave (a-b-c) corrective decline. The implications are weakness into 10362 before a secondary low is formed. The line parallel to the potential neckline may also come into play at slightly lower levels.

Joel – The latest recovery has stalled out for now by 107.70 and it looks as though the market could once again be poised for a bearish resumption. Look for a daily close below 105.00 to confirm and accelerate declines back towards 100.00, while back above 107.70 would negate and give reason for pause. 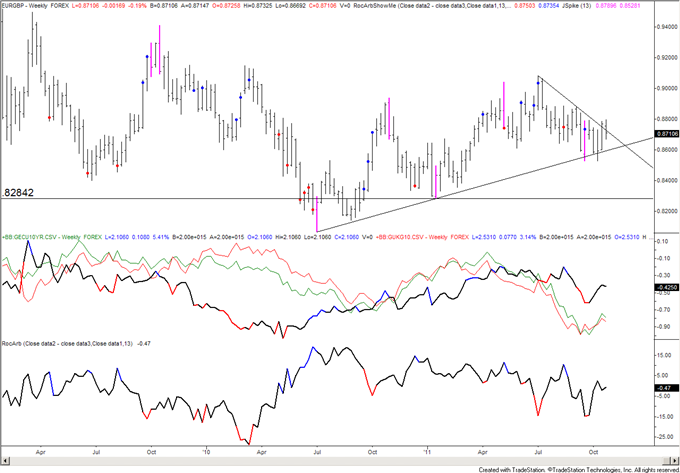 Jamie – After breaking through the trendline that extends off of the July and August highs, the EURGBP has failed to extend higher and the near term trend is best described as sideways. Still, as long as the year + support line holds (there were several false breaks), the longer term trend is viewed as constructive. Watch 8650 for support.

Joel – Remains locked in a choppy multi-day consolidation with no sign of a clear directional breakout in either direction just yet. As such, selling rallies above 0.8800 and buying dips below 0.8600 is the preferred strategy.