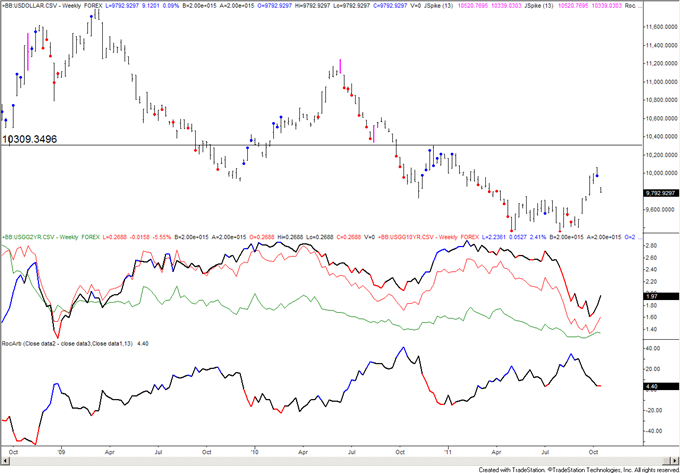 Jamie – The Dow Jones FXCM Dollar Index (Ticker: USDOLLAR) should see a corrective bounce following the impulsive decline from 10136. The decline from this level composes wave A of an A-B-C correction. Therefore, expectations are for a small B wave bounce to get underway soon (resistance is 9906).

Joel – The market remains very well supported on dips and is showing some clear signs of a material base. Key multi-week range resistance has been broken by 9,750 and this solidifies the prospects for a major bottom and should now open the door for fresh upside towards the 10,500 area over the medium-term. In the interim, current inter-day pullbacks should now be well supported by previous resistance turned support in the 9,700 area. 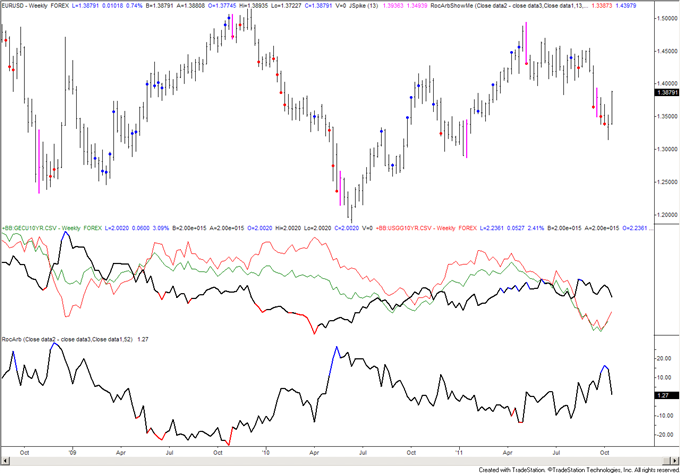 Jamie – The EURUSD rally from the low is in 5 waves so a top should form early next week. After completion of a 5 wave advance, one should expect a 3 wave move in the opposite direction (which is lower in this case). The final subdivisions of wave 5 look likely – resistance is 13936 (mid September high).

Joel – The break back above 1.3700 on Wednesday suggests that a more significant short-term base is in place by 1.3145 and from here we see risks for further consolidation before the broader downtrend resumes. Key short-term support now comes in by 1.3565 and a break back below will be required to alleviate immediate topside pressures. Rallies above 1.3900 should however be sold as the market looks to carve a fresh lower top on the daily chart. 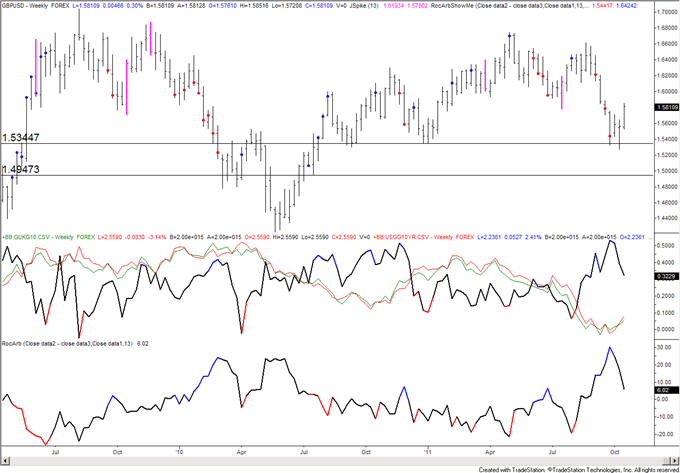 Jamie – The GBPUSD is rallying within a steep channel. Focus remains higher towards the 50% retracement of the decline from 16618 and 100% extension of the rally from the low (where the rally would consist of 2 equal legs) at 15958. Look higher.

Joel – The break back above 1.5715 on Wednesday triggers the formation of an inter-day double bottom on the daily chart which now opens a fresh upside extension towards a measured move objective at 1.6100. The 1.6100 area also loosely coincides with the 100/200-Day SMAs, but we would expect that any additional gains should be capped by these longer-term SMAs ahead of a resumption of the broader underlying downtrend. However, inability to extend gains followed by a break and close back below 1.5665 would suggest that the corrective rally has come to a premature end, and should accelerate declines. 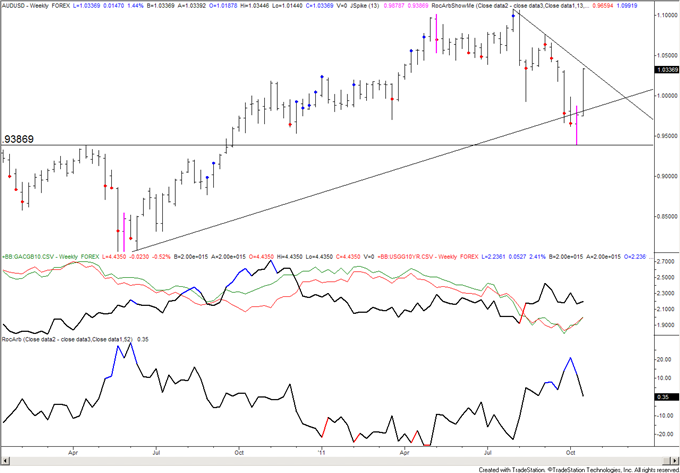 Joel– Any rallies are classified as corrective, with the market still locked within a well defined downtrend. As such, we would expect to see the current bounce well capped below 1.0300 on a daily close basis in favor of the next major downside extension back towards and eventually below 0.9385. Ultimately, only a daily close back above 1.0500 would delay outlook and give reason for pause. 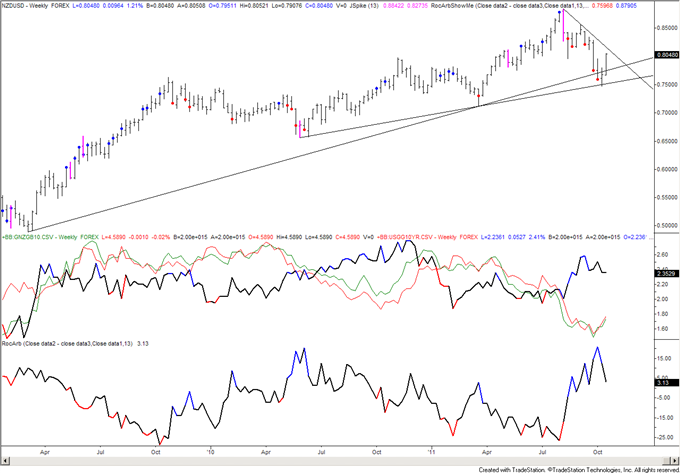 Jamie –The NZDUSD is lagging the AUDUSD a bit but focus is still on the same trendline (off of the August and September highs), which isn’t until the mid 8100s. Mid September support at 8117 reinforces this level as one of interest next week. The rally from the low would consist of 2 equal legs at 8130 and the 61.8% retracement of the decline from 8571 is 8150. Bottom line, mid 8100 should be strong resistance.

Joel –Any rallies are classified as corrective, with the market still locked within a well defined downtrend. As such, we would expect to see the current bounce well capped below 0.8000 on a daily close basis in favor of the next major downside extension back towards and eventually below 0.7465. Ultimately, only a daily close back above 0.8100 would delay outlook and give reason for pause. 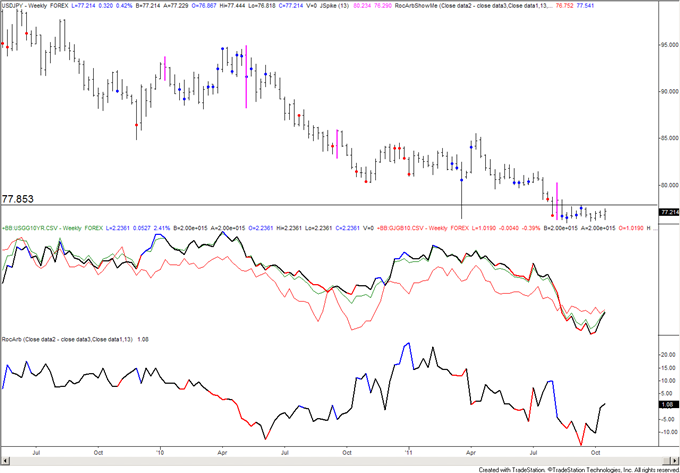 Jamie – “The sharp advance may be the beginning of the end of the wave 4 correction that has been unfolding since August. Currently testing Elliott channel resistance, 7784 is also resistance. As long as price is below 7956, I favor a top, reversal and decline to all time lows in order to complete 5 waves down from April.” Exceeding 7956 would negate the structure as described here and give way to a test of 7785 (beware the MoF / BoJ).

Joel – Has been locked in an intense consolidation in the 76.00’s over the past several weeks, since breaking to fresh record lows by 75.95, and while we would not rule out the possibility for a continuation of the downtrend, any additional declines are seen as limited. Longer-term technical studies are looking stretched and we anticipate the formation of a major base in favor of an intense upside reversal. Look for a break back above 77.90 to confirm outlook and accelerate. In the interim, any dips towards 75.00 are viewed as an excellent and compelling buy opportunity. 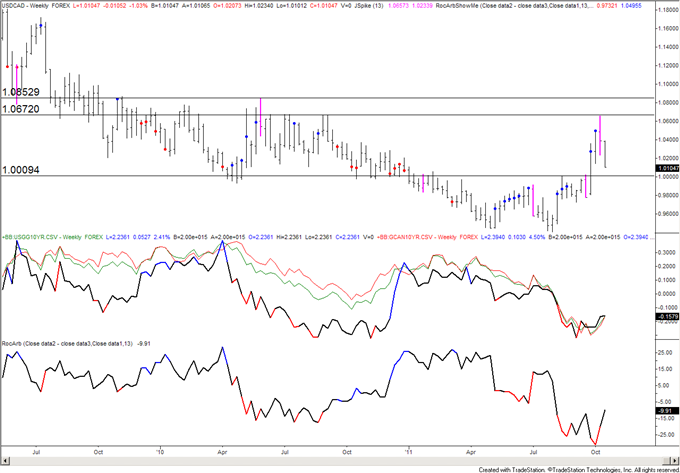 Jamie – The USDCAD has dropped below Elliott channel support but the 4th wave interpretation is favored as long as price is above the wave 1 high of 10007. The former 4th wave of one less degree at 10142 has been tested and ideally holds if the larger trend is up. 10380 is near term resistance.

Joel– Rallies have stalled out for now by 1.0660 with the market in the process of a pullback to allow for daily studies to unwind from overbought. However, the recent break back above parity confirms our core constructive outlook, with the pair in the process of carving out a major longer-term base. As such, look for any additional declines over the coming sessions to be well supported above parity on a daily close basis, with only a break back below to delay outlook. Back above 1.0660 will accelerate gains and expose the 1.1000 area further up. 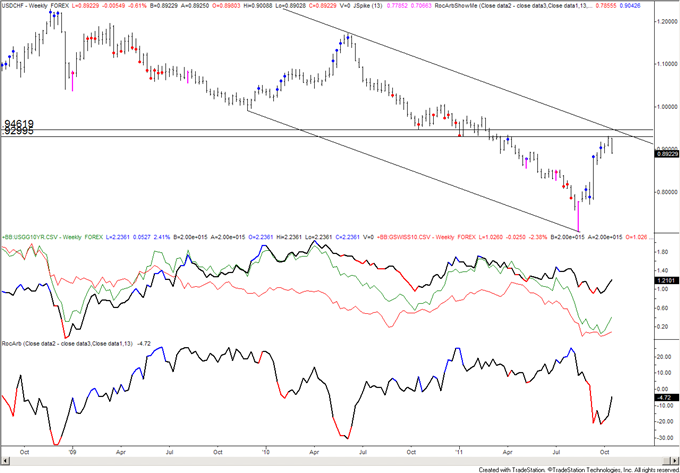 Jamie – Bigger picture, the USDCHF rally from the August low has that 5 wave look. While each wave might not be ‘perfect’ in its individual construction, the point is that a countertrend move should be expected. Perhaps one is underway from 9314. Currently testing the late September lows near 8900, a bounce would encounter resistance at 9120.

Joel – The market is in the process of consolidating its latest sharp recovery out from record lows by 0.7000. Although there are some risks over the short-term for deeper setbacks, any declines should be very well supported on a close basis above 0.8500. Back above 0.9315 will signal an end to the consolidative price action and confirm a fresh higher in place ahead of the next major upside extension back above parity. Ultimately, only a close back below 0.8500 would give reason for concern. 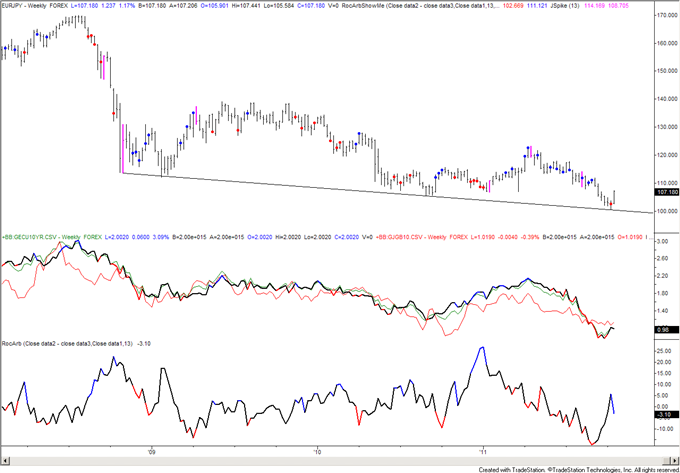 Jamie – Slightly above the trendline that extends off of the July and August highs, focus is now on lows from August and September at 10783-10800. In bear markets, RSI will NOT reach an overbought level of 70 (notice that the tops in July and August were between 50 and 60). Currently at 59, the EURJPY needs to top soon in order for the larger trend to be considered down.

Joel – The market could finally be showing signs of short-term basing after stalling ahead of critical support at 100.00 and rallying back above 105.00. From here, look for any setbacks to be well supported above 105.00 on a daily close basis, with a rally and close above 107.00 to further confirm basing outlook and accelerate gains. A close back below 105.00 will however negate recovery outlook and once again put the pressure back on the downside. 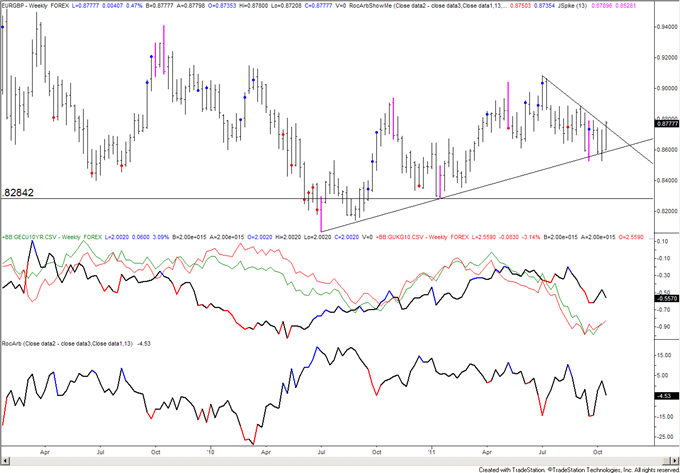 Jamie – The EURGBP has broken through the trendline that extends off of the July and August highs. With a positively sloped 200 day average (price has also broken through the average) and the year + support line holding (after a few false breaks), look higher towards the summer highs near 8900.

Joel – Remains locked in a choppy multi-day consolidation with no sign of a clear directional breakout in either direction just yet. As such, selling rallies above 0.8800 and buying dips below 0.8600 is the preferred strategy.