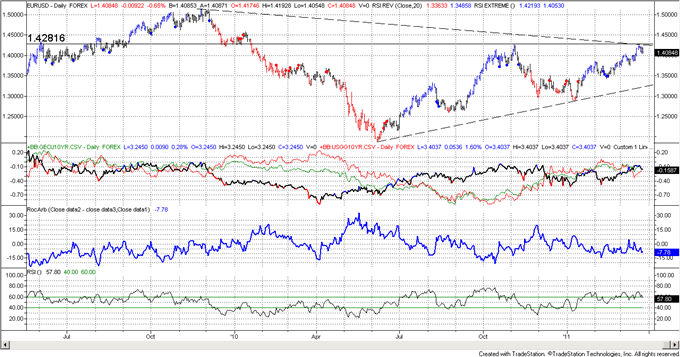 TrendD is weekly trend and STR denotes the trend’s strength. 1,2,3 STD are 1st,2nd, and 3rd standard deviations measure strength over the last 200 days.

Jamie – The EURUSD has encountered resistance from the trendline that extends off of the 2008 and 20009 highs. Still, a pop above 14282 cannot be ruled out. In such an instance, measured objectives come in at 14360 and 14413. JSINT is declining but not yet at the levels seen at prior tops. Coming under 13868 would suggest that a top is in place.

Joel - The market has stalled out for now ahead of the key November 2010 highs by 1.4280 and is in the process of consolidating. At this point, the price action can only be classified as a bullish consolidation and ultimately, only a break back below 1.3855 would threaten this structure. In the interim, look for a fresh higher low to carve out, in favor of the next upside extension beyond 1.4280 and towards 1.4500 further up. A daily close back below 1.4050 delays. 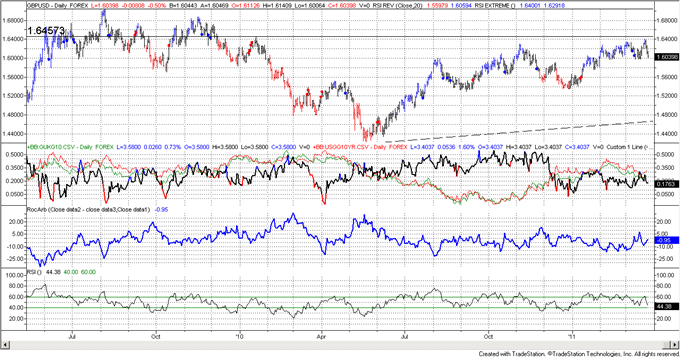 Jamie – As focused on in the Daily Technicals in recent weeks and months, a larger triangle appears to be unfolding in the GBPUSD from the late 2008 low. Resistance extends to 16457 (2010 high and 78.6% retracement). JSINT recently turned up from its lowest level since 2009, which is bearish. Divergence with RSI across at the last 4 daily peaks is bearish as well. Look lower.

Joel - The 1.6300 handle continues to be a difficult obstacle for bulls, with the market unable to hold above the figure for any meaningful period of time. As we had warned in the previous daily analysis, the market has once again rejected trading above the figure to set up a bearish reversal exposing deeper setbacks into the 1.5700-1.6000 area over the coming sessions. Ultimately, only back above 1.6400 delays. 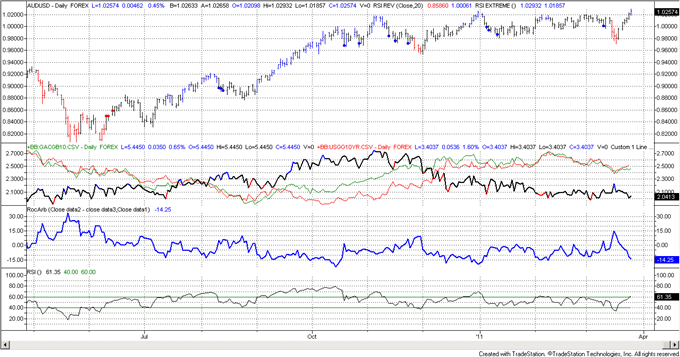 Jamie – After breaking below 9803 and trading to 9700, the AUDUSD nearly reached 10300 in less than a week. Round figures such as 10400 and 10500 should be watched for resistance in the coming days and weeks. Notice the drastic divergence between the price trend and interest rate differential trend however and the subsequently low JSINT reading. This warns that the move is not sustainable.

Joel - The market has been in the process of recovering since breaking below critical support at 0.9800 a few days back, with the latest rally resulting in a push back above 1.0200 to threaten a break to fresh post float record highs above 1.0250. Nevertheless, we still view the current bounce as an opportunity to sell, and expect to see the market very well capped from here below 1.0250 on a daily close basis. Ultimately, only a break and close back above 1.0250 would delay outlook. 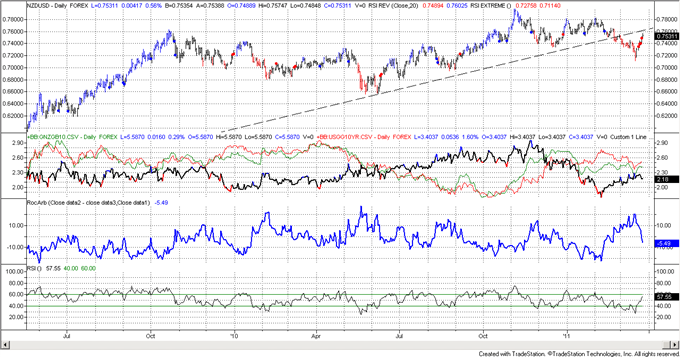 Jamie – I maintain that the larger trend is downbut the next few weeks should present trading opportunities from both sides of the market. Near term resistance extends to 7600 and the underside of a long term former support line, which is near 7700 next week. 7455 offers short term support with a drop below shifting focus to 7360.

Joel - The break below major neckline support at 0.7340 in recent trade has now triggered a double top formation that projects additional declines towards the 0.6700 area further down. Below 0.6700 then exposes more critical support at 0.6500. Look to sell into rallies, with a fresh lower top now ideally sought out below 0.7550. Only a daily close back above 0.7550 delays. 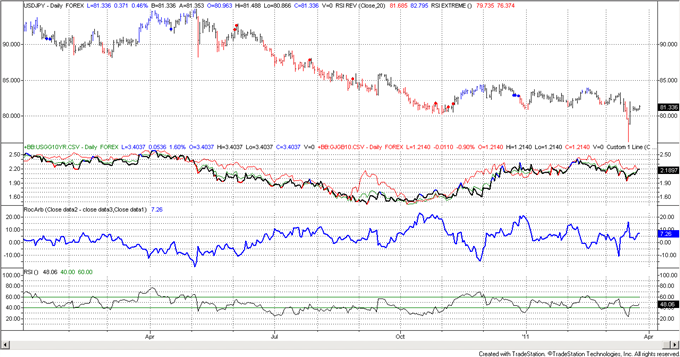 Jamie – Last week’s panic low may prove an important long standing low as the drop was from a triangle. Thrusts from triangles are considered terminal moves that complete much larger patterns. In this case, the decline from the 2010 high appears complete therefore focus is on 8500. Near term support is at 7975.

Joel - The latest violent drop-off to fresh record lows by 76.35 has been intense, with the market threatening a fresh longer-term downside extension below 80.00. However, given the nature of the move, we would not at this point categorize the downside break as anything significant that alters the medium-term outlook. For now, the sidelines are the best place to be and we will look to see where the market closes this week to gain a clearer perspective. A weekly close below 79.75 might open a retest of the 76.35 spike lows, but any additional declines below 76.00 are seen limited. A weekly close back above 81.20 on the other hand, would take the immediate pressure off of the downside. 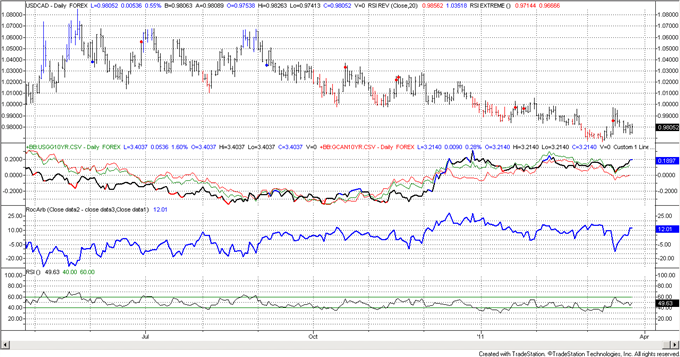 Jamie – The USDCAD has spent enough time above its former resistance line to qualify as a legitimate break. Near term, the rally is constructive although formation of a secondary low has proven elusive. A move above 9863 is needed in order to inspire confidence in the upside.

Joel - A near bullish outside week after establishing fresh multi-month lows by 0.9665 got us excited with the prospect for a major reversal, and the latest break and weekly close back above 0.9800 helps to confirm our constructive outlook and should accelerate gains. Next key topside resistance comes in by 0.9975, with a break above opening the door for a test of 1.0060 further up. From here, look for any intraday setbacks to be well supported above 0.9700 on a daily close basis, with only a break back below 0.9665 to ultimately negate outlook and give reason fro concern. 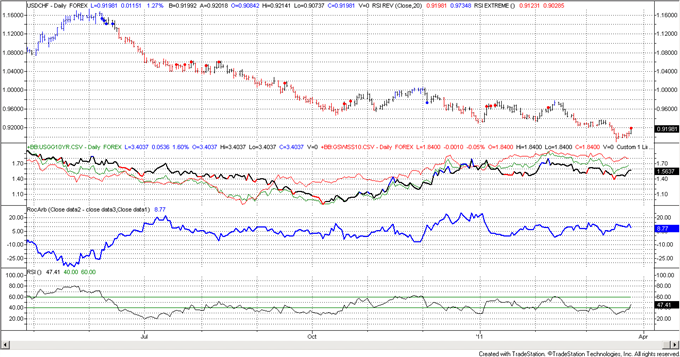 Jamie – The USDCHF continues to hold above last week’s low but the rally from the low is corrective. Barring a break above 9123, expect a run at the lows and test of 8900. Watch the corrective channel as well as former support at 9200 for resistance.

Joel - The latest break to fresh record lows below 0.9000 (0.8910) is certainly concerning and threatens our longer-term recovery outlook. Still, we do not see setbacks extending much further and continue to favor the formation of some form of a material base over the coming weeks for an eventual break back above parity. Look for an initial break and close back above 0.9100 to relieve immediate downside pressure, while back above 0.9370 will officially confirm reversal prospects and accelerate gains. Only a break and weekly close below the recent record spike lows at 0.8910 ultimately delays outlook. 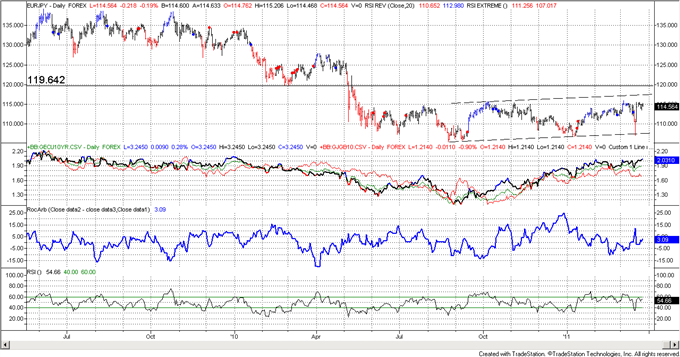 Jamie – On a net basis, the EURJPY is relatively unchanged since late February. Tell that to anyone that has been in the market since then and they’ll slap you silly. Quite simply, the EURJPY is in a range between 107 and 11500 (and has been since mid 2010). I am cautiously bearish with price near the upper end of its range now. 11200 and 11070 are supports.

Joel - The market remains very well supported on dips with the overall price action defined as consolidative. However, given where the market trades historically, we continue to like the idea of being buyers down by current levels in favor of a major bullish reversal over the coming months. For now, key resistance comes in by the multi-week consolidation highs at 116.00, and a break and close back above this level will be required to officially force a shift in the structure. In the interim, buying dips towards 110.00 is favored. 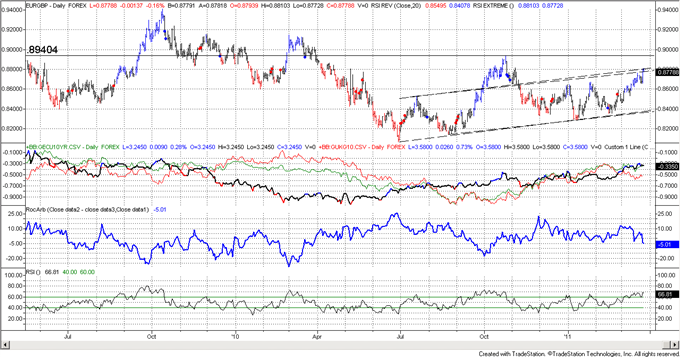 Jamie – A head and shoulders continuation pattern appears to be unfolding from the June 2010 low. I wrote Wednesday that “a slight new high cannot be ruled out but risk has now shifted to the downside. 8800 is resistance. A drop under 8532 confirms a reversal.” The EURGBP has reached 8800 to test the parallel neckline resistance. I favor the downside from here. Trading above the parallel line would negate the downside bias and shift focus to 8940.

Joel - The latest sharp rally back above 0.8800 is concerning for our broader bearish outlook, with the market breaking back above a major falling trend-line from the 2009 peak. Should we see the market establish above the 0.8800 figure over the coming days, then expect to see more upside ahead with the overall structure shifting to the bullish side. Back below 0.8625 now required to officially alleviate topside pressures.

Jamie Saettele publishes Daily Technicals every weekday morning, COT analysis (published Monday), technical analysis of currency crosseson Monday, Wednesday, and Friday (Euro and Yen crosses), and intraday trading strategy as market action dictates at the DailyFX Forex Stream. He is the author of Sentiment in the Forex Market. Past presentations on technical analysis are available to view. Send requests to receive his reports via email to jsaettele@dailyfx.com.

If you wish to receive Joel’s reports in a more timely fashion, emailinstructor@dailyfx.com and you will be added to the distribution list.