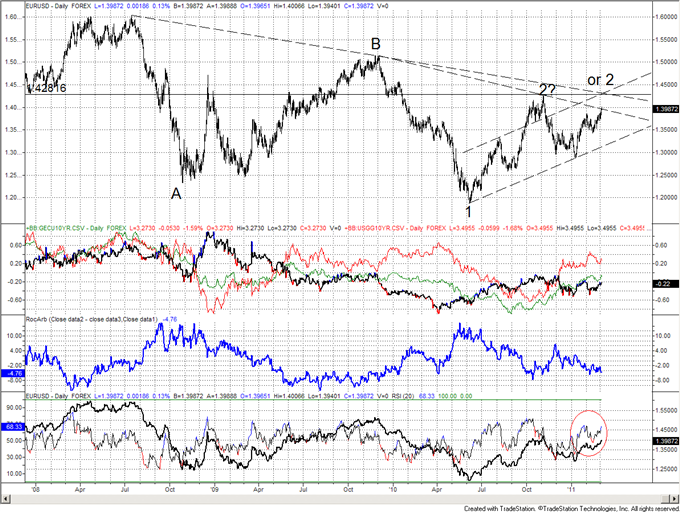 TrendW is weekly trend and CURR denotes how long the current trend has been underway in weeks. 1,2,3 STD are 1st,2nd, and 3rd standard deviations of the duration of trends measured over the last 150 weeks (3 years).

Jamie – The EURUSD continues to crawl higher and price has met a trendline that extends off of the December 2009 and November 2010 highs. At this point, bulls have 14282 in their sights but JSINT is at levels that line up with previous tops (although not as low as the reading on GBPUSD) and bearish sentiment is rampant. The most widely read story at wsj.com today was “Why the Dollar’s Reign is Near an End”. Still, points of reference must determine direction and ONLY a drop below 13743 (March low thus far) would suggest that a top is in place.

Joel - It seems as though there was no need to wait for confirmation following Wednesday’s daily close by 1.3860, with the market easily accelerating on Thursday above the level and towards our next key topside objective just shy of 1.4000. The market has since stalled out and the failure ahead of 1.4000 should not be taken lightly, with the market stalling by the 78.6% fib retrace off of the major November-January high-low move. For now, we will use 1.4000 as our gauge for directional bias. A daily close above 1.4000 will open the door for a direct retest of 1.4280, while inability to establish above the figure will open the door for a meaningful bearish reversal. 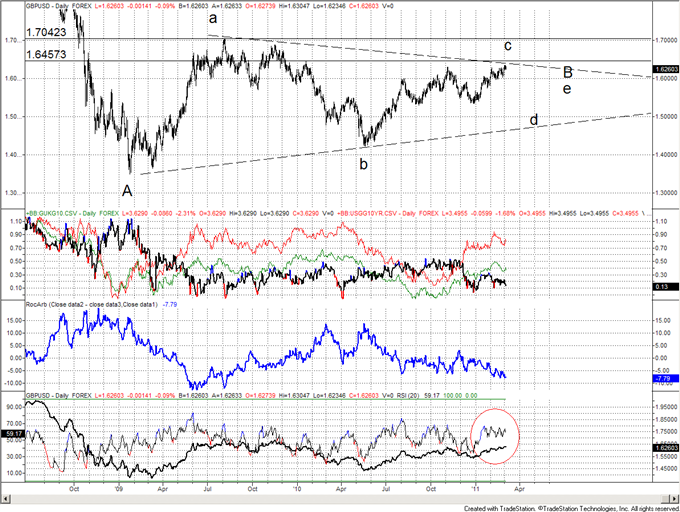 Jamie – As focused on in the Daily Technicals in recent weeks and months, a larger triangle appears to be unfolding in the GBPUSD from the late 2008 low. Resistance extends to 16457 (2010 high and 78.6% retracement). JSINT is at its lowest level since the 2009 top as is commercial buying on futures contracts. Divergence with RSI across the last 3 daily peaks is bearish. The GBPUSD is vulnerable.

Joel - After failing to establish above 1.6300 over the past several weeks, the market finally managed to break and close above the level on Wednesday to suggest that a fresh upside extension towards 1.6500 could be underway. However, Thursday’s failure to hold above the figure once again leaves us doubting the latest move, and a break and close back below 1.6215 would confirm our suspicions and open the door for a key bearish reversal. For now we remain sidelined until a clearer opportunity presents. 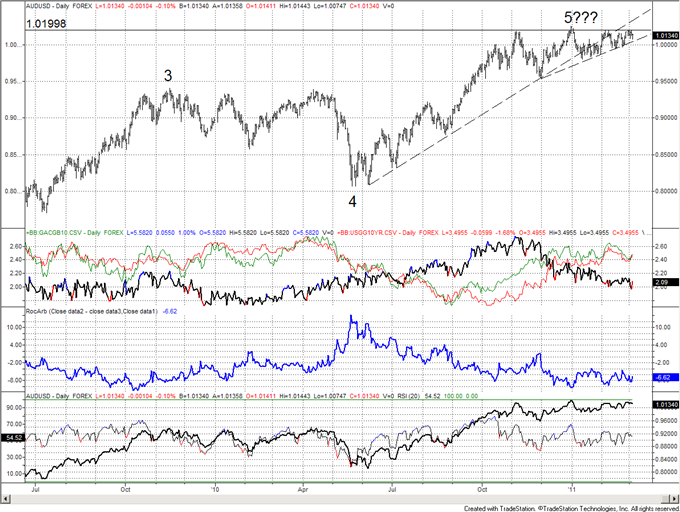 Jamie – The AUDUSD remains stationary and I await a directional signal from the market. Only a break below 9803 would confirm a reversal to the downside. A move above 10256 would shift focus higher following a bullish triangle break towards 10500 or even 11000 (closer to 11000 is using traditional triangle measurement methods). The 1st day of the year remains the high for the year, which is significant. Traders should use 10201-10074 as a range to play a breakout next week (opening range for the month). JSINT is flashing sell signals as the trends in interest rate differential and exchange rate have diverged significantly.

Joel - Although setbacks have stalled out for now ahead of 0.9800, we continue to favor risks for additional downside and like the idea of selling into current rallies. Ultimately, we see the market in the process of carving out a major top and any rallies from here should be well capped below 1.0200 on a close basis. Only back above 1.0200 gives reason for concern, while below 0.9945 should accelerate to 0.9800 and below. 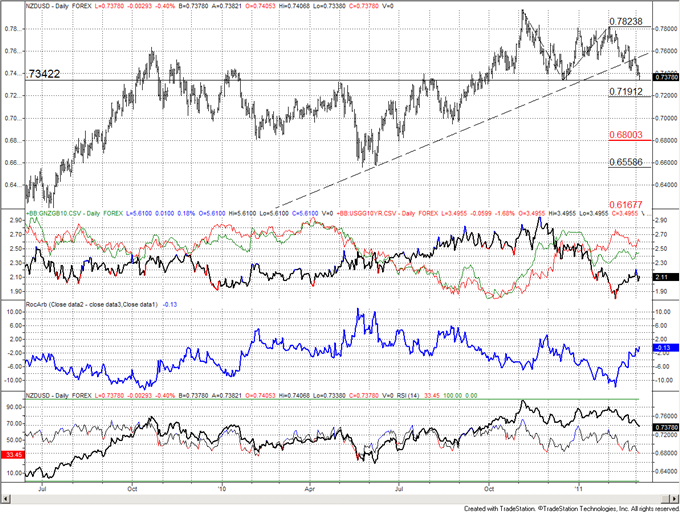 Jamie – The NZDUSD traded below (barely) 7342 today and price closed at its 200 day SMA. Clearly a critical juncture, the NZDUSD may enjoy a bounce. Resistance is from 7475 to 7554 and I favor selling strength with a stop above 7655. Downside objectives are the 100% extension at 7191, former support and psychologically significant 7000 and finally 6800 (161.8% extension, round figure, and former support). JSINT is in the middle of its range.

Joel - The market remains well offered on rallies to put in a series of inter-day lower highs and lower lows. The latest break below 0.7425 confirms a fresh lower top by 0.7555, and opens the door for the next downside extension towards critical medium-term support by 0.7340. Should the market then establish a sustained break below 0.7340, we could then see an acceleration of declines back to the 0.6500 area over the coming weeks. In the interim, any rallies should now be well capped ahead of 0.7650. 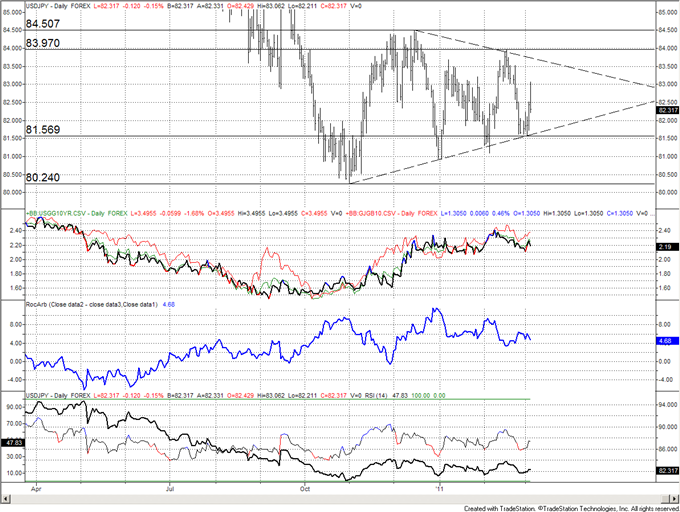 Jamie – Signals are conflicting with a bullish RSI reversal and positive 20/50 day average cross yet the contracting USDJPY range since November appears more and more like a bearish triangle. Triangles are terminal patterns so a drop to a new low (and then a record low) could complete a multi decade decline in the USDJPY (long term Elliott wave pattern). The extent of the potential decline is in question – round figures such as 7500 would surely garner interest.

Joel - Although the market has come under some intense pressure in recent trade back below 82.00, overall price action remains largely consolidative with the market once again very well supported in the 81.00’s. For now, 81.00 remains the key level to watch below, and only a close below this figure would negate the current range-bound price action and give reason for concern. As such, we like the idea of buying into the latest dips in favor of a bullish reversal back towards the key 84.50 multi-day range highs over the coming days 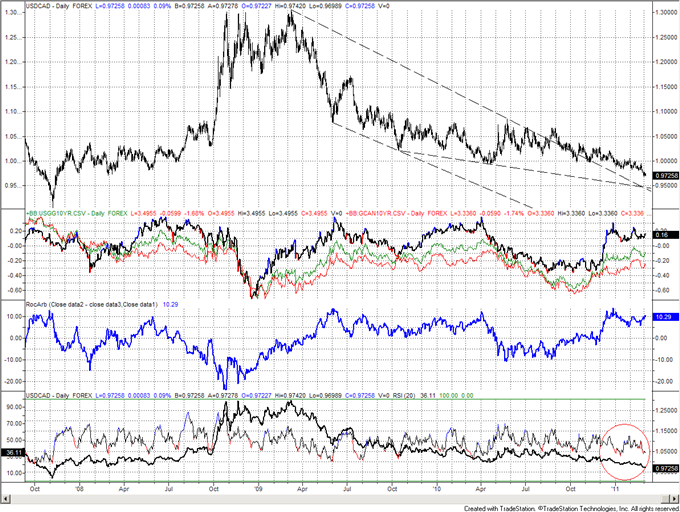 Jamie – 9500 is a level of interest in the USDCAD. While of round figure importance, the level is also a support line next week (extended off of the October 2009 and April 2010 lows). JSINT is nearing levels that have marked buying opportunities in recent years, as evidenced by the major divergence between the interest rate differential and exchange rate since November.

Joel - Daily studies are starting to look a little stretched, and this in conjunction with longer-term cyclical studies which warn of a major base, leave us looking for opportunities to buy rather then selling into the downtrend. The latest dip below the 0.9800 figure is viewed as an excellent opportunity to establish a very playable counter-trend long position. Ultimately, only a daily close back below 0.9700 would delay outlook and give reason for concern. A break and close back above 0.9800 reaffirms bias. 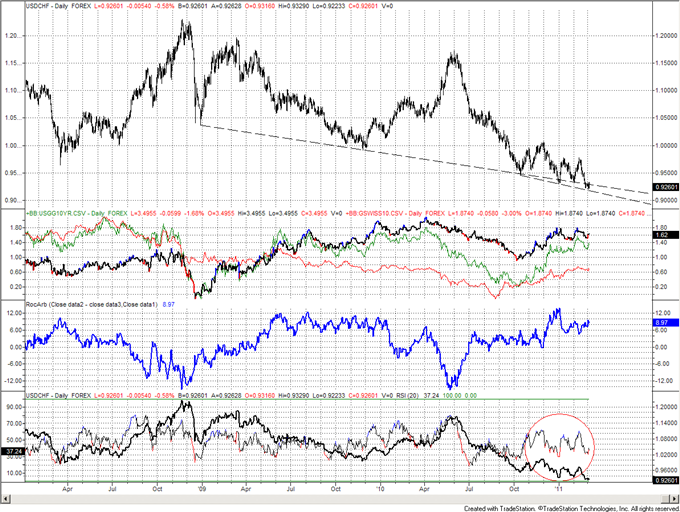 Jamie – Watch for support from the line that extends off of the October and December lows. This level isn’t much below 9200 next week with continued weakness targeting 9000. JSINT is at levels consistent with former lows thus my interest in a drastic reversal is piqued. Given intra month seasonality tendencies, I would only trade a reversal if evidence of a low develops by Tuesday.

Joel - The latest break to fresh record lows by 0.9200 is certainly concerning and threatens our longer-term recovery outlook. Still, we do not see setbacks extending much further and continue to favor the formation of some form of a material base over the coming weeks in favor of an eventual break back above parity. From here, big figures become key support as we are in unchartered territory, while a weekly close back above 0.9320 would help to encourage bullish reversal prospects. 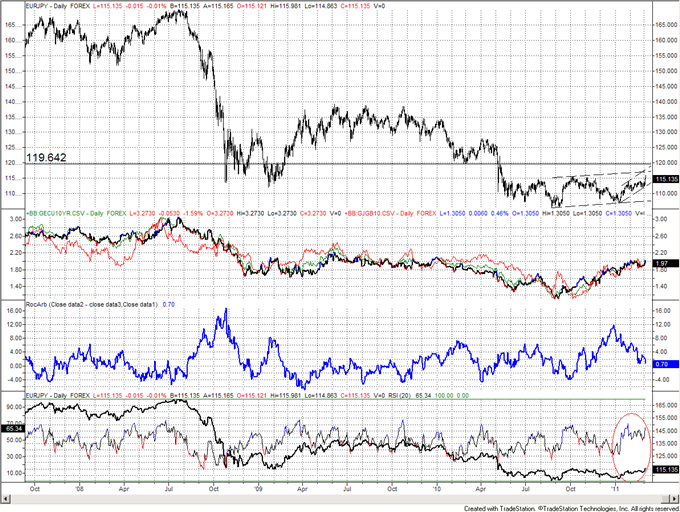 Jamie – The EURJPY broke above its October high of 11566 and quickly traded to 11600 before reversing to close near the low of its day. It’s too early to say that the break was false but RSI divergence is present and the respective EURUSD and USDJPY outlooks point to a lower EURJPY (if they are accurate of course). A drop below 11253 would confirm an intra month reversal.

Joel - The market remains very well supported on dips with the overall price action defined as consolidative. However, given where the market trades historically, we continue to like the idea of being buyers down by current levels in favor of a major bullish reversal over the coming months. For now, key resistance comes in by the multi-week consolidation highs at 115.70, and a break and close back above this level will be required to officially force a shift in the structure. In the interim, buying dips towards 112.00 is favored. 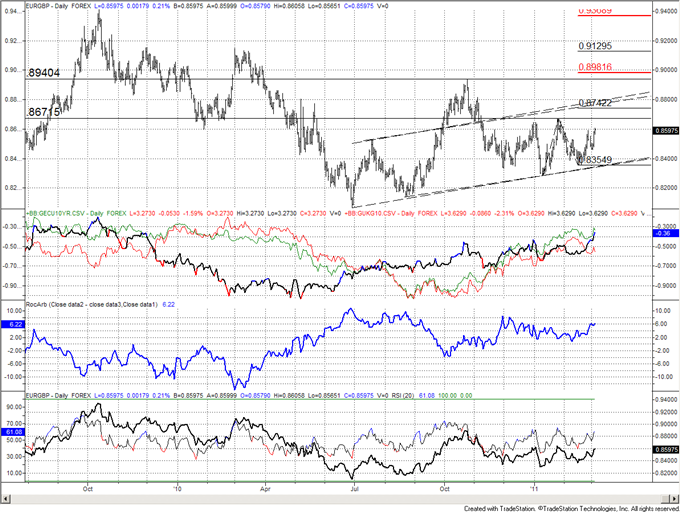 Jamie – The EURGBP has traded to a fresh 20 day high and looks poised to break above 8672. 8742 and the parallel head and shoulders neckline are then in focus near 8750. JSINT is in a bullish position and price held above its 20, 50, and 200 day averages this week. Perhaps the EURGBP action tells us that the GBP is in for trouble going forward.

Joel - The market continues to adhere to some major falling trend-line resistance, with the latest topside failure off of the channel top opening an acceleration of declines back below 0.8500. From here the risks are for additional declines over the medium-term with sights set on a move to fresh yearly lows by critical psychological barriers at 0.8000. Ultimately, only back above 0.8700 would negate and give reason for concern, while rallies to 0.8600 should be sold aggressively.

Jamie Saettele publishes Daily Technicals every weekday morning, COT analysis (published Monday), technical analysis of currency crosseson Monday, Wednesday, and Friday (Euro and Yen crosses), and intraday trading strategy as market action dictates at the DailyFX Forex Stream. He is the author of Sentiment in the Forex Market. Past presentations on technical analysis are available to view. Send requests to receive his reports via email to jsaettele@dailyfx.com.

If you wish to receive Joel’s reports in a more timely fashion, emailinstructor@dailyfx.com and you will be added to the distribution list. 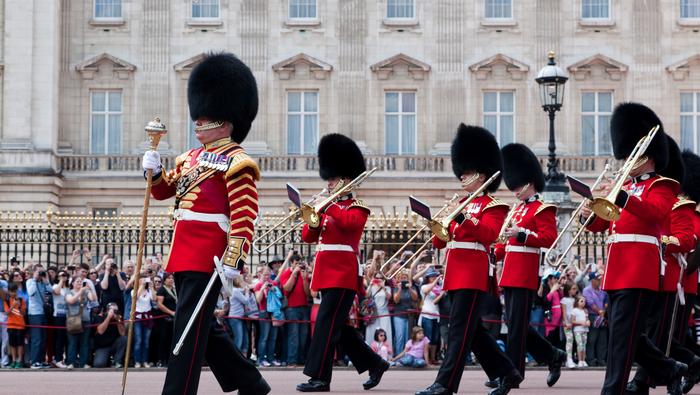