GBP/USD, AUD/USD Expected to be Most Volatile Currencies Next Week 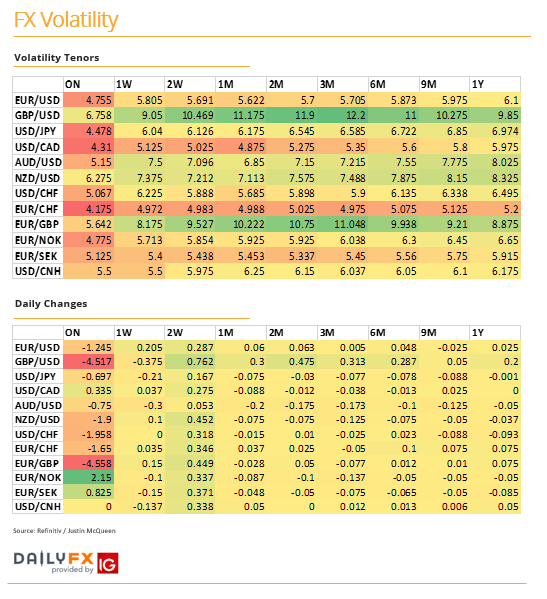 As the political limbo continues within the UK, implied volatility in the Pound remains elevated relative to its counterparts (albeit this has eased in recent weeks). Earlier in the week, Boris Johnson had been dealt yet another blow to his authority after the Supreme Court ruled that the Prime Minister’s suspension of parliament had been unlawful, which in turn has seen MPs recalled back to parliament. While there is a plethora of UK data in the upcoming week, investors will largely be on Brexit watch, which will provide much of the volatility in the Pound and given the continued uncertainty, the currency will remain in the crossfire. 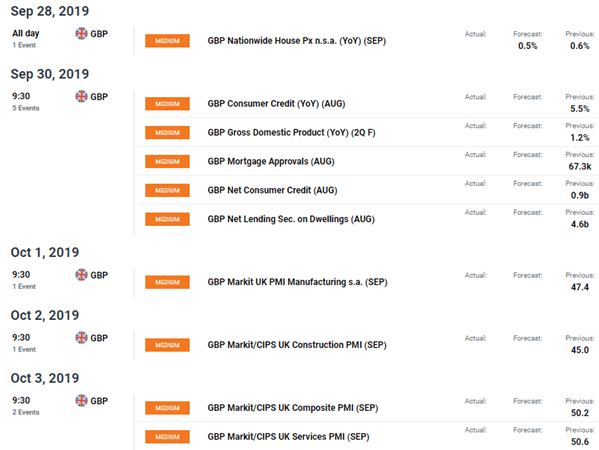 In regard to a directional bias, risk reversals continue to show a marginal premium of puts over calls, thus suggesting that downside in the currency remains. As a reminder, the Pound is set to mark its largest weekly loss since the beginning of August vs the USD. That said, what is a risk the currency is whether the government is able to circumvent the Benn Act (forces the PM to ask for an A50 extension if no-deal is reached by October 19th), given that it will raise the imminent risk of a no-deal Brexit.

UK Government options being considered to deliver Brexit by Oct 31:

GBP/USD ATM break-even straddles = 123pips(meaning that for option traders to realise gains, the spot price must see a move greater than 123pips).

In light of the most recent labour market report, expectations for a rate cut by the RBA had surged, making October a live meeting. That said, the RBA Governor had failed to provide a clear signal that the RBA would move at the upcoming meeting, thus given that money markets are pricing in a 78% chance of a cut, a decision to stand pat would likely spark a notable uptick in the Australian Dollar, something the RBA have been looking to avoid. That said, given that the labour market has shown little signs of improving and with the continued uncertainty regarding US-China trade tensions weighing on global growth, it is somewhat increasingly difficult to argue against further rate reductions.