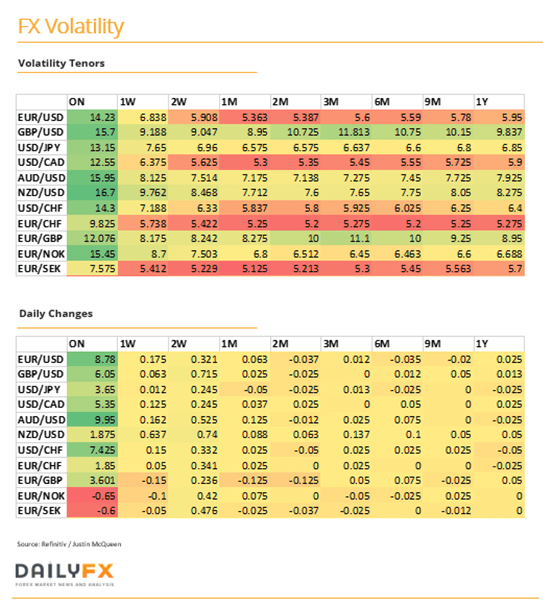 Most Volatile Currencies on Fed Day

Overnight AUD/USD implied volatility has surged to its highest level since May as focus turns to the Federal Reserve rate decision, alongside the Australian jobs market report. Implied vols have added nearly 10 vols in risk premium to 15.95, which in turn means that AUD/USD ATM break-even straddles = 46pips(essentially, for option traders to realise gains, the spot price must see a move greater than 80pips).

The importance of the labour market data has grown since the release of the dovish RBA minutes at the beginning of the week, which has seen rate expectations of a 25bps to 0.75% rise from 27% to 46%. Consequently, a rate cut at the October meeting could be somewhat of a material risk amid a weaker than expected labour market report.

Overnight USD/CAD implied volatility has gained 5.35 vols to 12.55, marking its highest level since January. In light of the recent volatility across the oil complex, notable risk premium has been added to oil-sensitive currencies, in particular the Canadian Dollar. As such, the USD/CAD ATM break-even straddle = 69pips. Prior to the FOMC meeting, CAD traders will be placing a watchful eye on the latest inflation report, which in recent months have been holding relatively steady at the BoC’s target. As the BoC’s preferred inflation metric holding at the 2% target, it would take a notable deviation to prompt a rethink in the central banks neutral outlook.

The Federal Reserve monetary policy decision is scheduled for 19:00BST, where expectations are for the Fed to lower the fed funds rate by 25bps to 1.75-2.00% with two hawkish dissenters (George & Rosengren). However, with a cut largely priced in, eyes are on the outlook with regard to monetary policy and whether the central bank will leave the door open to further interest rate cuts. As a reminder, the latest staff economic projections are due to be released, in which the dot plot projections are likely to be guided lower in order to reflect the recent rate cuts. 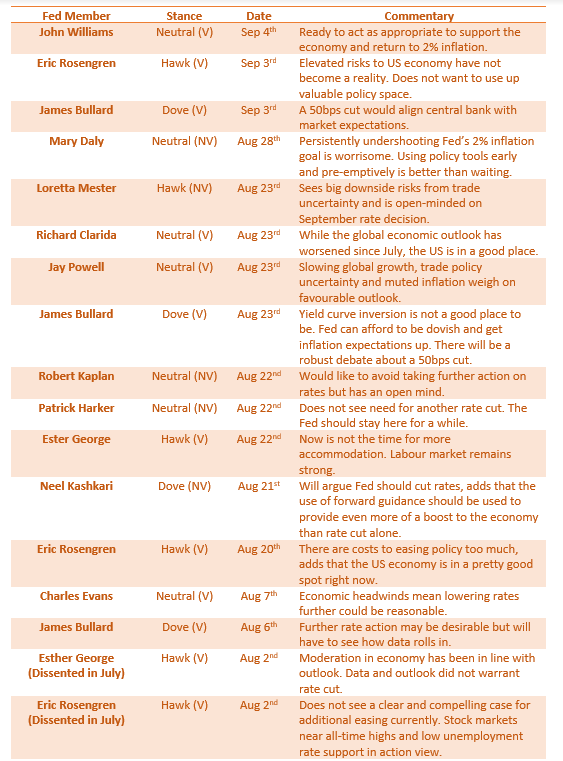