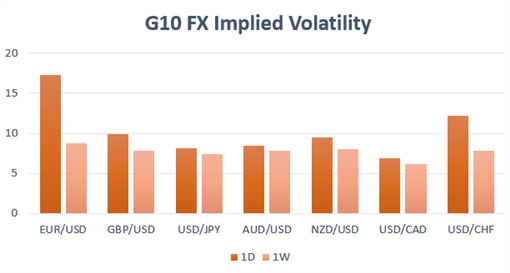 Euro Expected to be the Most Volatile Currency

EURUSD |Overnight EURUSD implied volatility which covers the ECB risk premium has surged to its highest level in over 2-years. Implied vols have added over 12 vols risk premium to 17.275 since September 10th reflecting the markets increased expectations that the Euro will see a large reaction to the ECB’s rate decision. That said, EURUSD ATM break-even straddle = 80pips(meaning that for options traders to realise gains, the spot price must see a move greater than 80pips). Alongside this, risk reversals highlight that the increased demand for volatility has seen investors seek greater protection for EUR/USD losses, however, risk reversals are relatively tame at -0.300, while the 1W and 1M tenors have seen risk reversals edge marginally higher, thus suggesting that option markets are somewhat directionless.

The ECB monetary policy decision is scheduled for 12:45BST (07:45EST), where expectations are for the ECB to cut the deposit rate by at least 10bps to -0.50% with the also market also pricing in a 35% chance of a 20bps reduction. Alongside this, the rate cut is expected to be accompanied by a tiering structure, which attempts to alleviate the pressure for European bank profitability. Elsewhere, the widely focused area is on the size of QE, in which market consensus is looking for EUR 30bln/month QE package that will last for 12-months. However, market participants have questioned whether the ECB disappoints in regard to possible QE purchases following the recent rhetoric from hawkish ECB members that have signalled that QE is not needed currently. 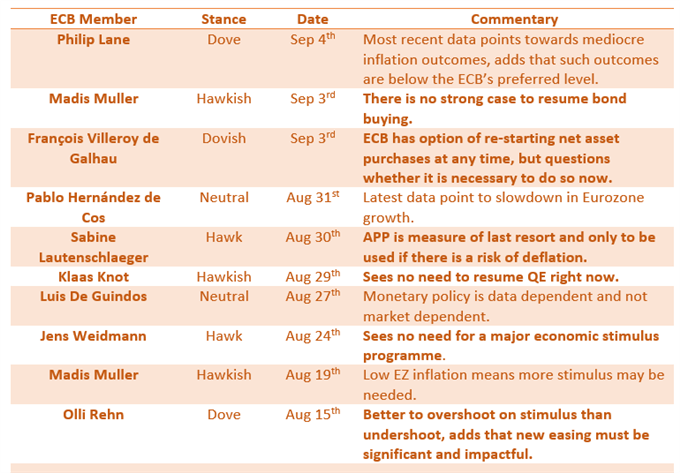 As a reminder, following the 12:45BST announcement, the immediate focus will be on ECB Draghi’s press conference from 13:30BST (08:30EST), where it is expected that the latest staff projections will be downgraded for both growth and inflation.