GBP/USD, EUR/USD Expected to be the Most Volatile Currencies Next Week 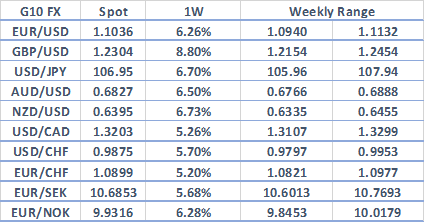 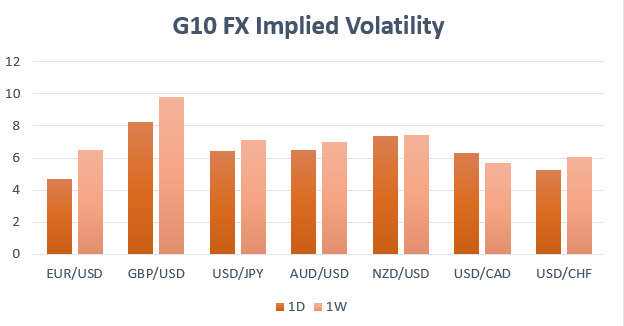 GBP/USD | Not Out of the Woods Yet, Road Ahead Remains Uncertain

Once again, the Pound is expected to be the most volatile currency next week as the turbulent nature of UK politics continues to take focus. GBP/USD charged to a five-week peak following a wave of short-covering as opposition parties defeated UK Prime Minister Johnson in passing a motion that would see another extension to Article 50 to January 31st, 2020, which in turn saw the immediate risks of a no-deal Brexit diminish slightly. That said, the road ahead for UK politics remains an uncertain one, thus GBP/USD is not out of the woods yet.

Following the Prime Minister’s defeat in parliament, a snap election is seemingly unavoidable with markets participants playing close attention as to whether a GE will be called next week. Of note, Boris Johnson has demanded that a snap election takes place before October 31st, while Labour Leader Jeremy Corbyn wants an election after an extension of the Brexit deadline is legislated. Nonetheless, while opinion polls show the Conservative Party with a comfortable lead over Labour, the outcome remains a difficult one to predict.

GBP/USD 1-week ATM break-even straddles imply a move of 133pips(meaning that option traders need to see a move of at least 133pips in either direction in order to realise gains). 25 delta risk reversals have pared much of its downside following this week’s short squeeze, showing that option markets are relatively neutral on the pair.

Over the past week, the Euro had been lifted amid the rally in Sterling, with a further boost attributed to a more EU friendly Italian coaltion being sworn in. However, with all eyes on the ECB meeting next week, we are yet to get carried away with this push higher in the Euro.

Since ECB President Draghi’s “whatever it takes 2.0” at the Sintra conference, markets have bet big that the ECB will announce a fresh stimulus package, which will likely involve a deposit rate cut with some form of tiering in order to alleviate the pressure on European banks, as well as QE purchases. However, with regards to the latter tool, nuances appear to have emerged with the hawkish ECB members attempting to walk back expectations of a large stimulus package, citing that asset purchases should be seen as a last resort. As such, while there is a risk that the ECB could dissapoint market expectations, the deteriorating outlook for the Eurozone economy argues the case for a large stimulus package, providing caution to betting against the central bank. EUR/USD 1-week ATM break-even straddles imply a move of 82pips.

Lautenschlaeger: Convinced that APP is measure of last resort. Way too early for huge stimulus

Weidmann: No need for a major economic stimulus programme