Most Volatile Currencies Next Week - US Dollar, GBP/USD, AUD/USD 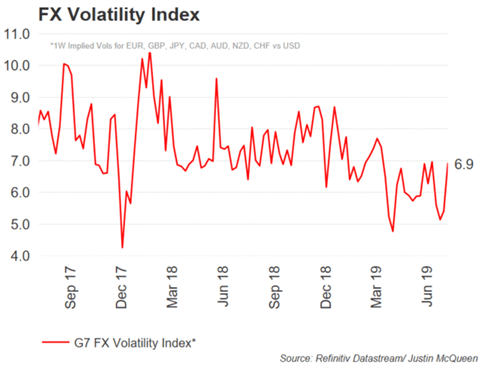 Amid of plethora of key economic data releases and in particular the Federal Reserve rate decision, the 1-week G7 FX implied volatility index has jumped from the near 2019 lows of 5.41 to 6.9 vols, which is the highest the index has been in a month. Much of the focus will of course be on the Fed meeting, where the central bank is expected to deliver a rate cut for the first time in over a decade.

In regard to the size of the cut, the broad consensus is for a 25bps cut, however, Fed fund futures imply 29bps worth of easing, which effectively suggests that the market are expecting a 17.5% chance of a 50bps. Thus, the markets have set the bar relatively high for the Fed to reach those dovish expectations, particularly with 66bps of cuts priced in by the year-end. Therefore, markets will also examine Chair Powell’s presser for clues regarding the future path of interest rates. Failure to match the dovish expectations leaves risk sentiment vulnerable to a pullback. Base case remains for a 25bps cut, given that the most dovish member James Bullard, highlighted that a 50bps cut would be overdone.

Aside from the Fed, tier 1 US data will also help manage expectations for the future path of interest rates. On Thursday, ISM Manufacturing PMI is expected to rebound following the sizeable turnaround in the Philly Fed Index, before the week closes out with the latest US jobs report. 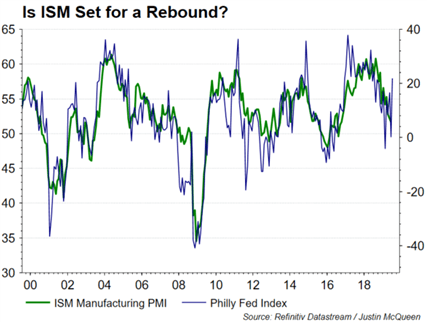 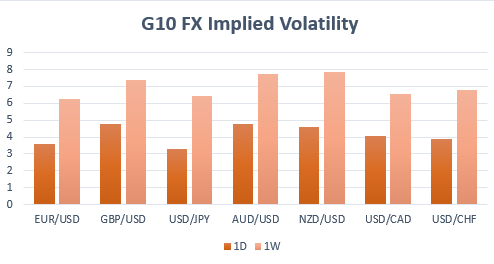 AUD: The Australian Dollar is expected to among the most volatile currencies next week with 1-week implied vols at 7.725, which marks the highest reading in roughly a month.

For Aussie traders the domestic focus will be on the Q2 inflation report (31st July), where expectations are for a marginal increase to 1.5% from 1.3%. However, the RBA’s preferred measure of inflation (trimmed mean) is expected to dip slightly to 1.5% from 1.6%, therefore moving further away from the central banks 2-3% target band. Consequently, this would raise expectations for additional rate cuts, which the RBA Governor recently alluded to, after stating that “it is reasonable to expect an extended period of time of low interest rates”. That said, this could also increase the need for the re-elected Australian Treasurer to adjust the inflation target lower, given Australia’s struggles in building inflationary pressures.As it stands, interbank futures are pricing in a 17.5% chance of a 25bps cut at the August 6th rate decision.

Elsewhere, retail sales (2nd Aug) will also be of note, where expectations are for a rebound. While on the international front, eyes will be on the latest Chinese PMI figures, starting with NBS Manufacturing PMI on July 31st and Caixin PMI on August 1st.

AUDUSD 1-week ATM break-evens imply a move of 60pips(meaning that option traders need to see a move of at least 60pips in either direction in order to realise gains). Risk reversals show a marginal bias for downside protection with demand for puts exceeding calls. Eyes will be on for a potential break below 0.6900.

GBP: As the UK Government go into parliament recess (will return on September 3rd) the political front could be relatively quiet, thus, focus will be on the Bank of England Quarterly Inflation Report. No changes are exepected with regard to their monetary policy tools, however, given the recent speechs from the likes of Governor Carney and in light of the soft data, the BoE are expected to offer a more cautious stance. 1-week implied volatility are at the highest since the beginning of May at 7.15 vols with the ATM break-even straddle implying a move of 99pips.

Options are Pricing in Brexit Risks Ahead of Halloween Deadline 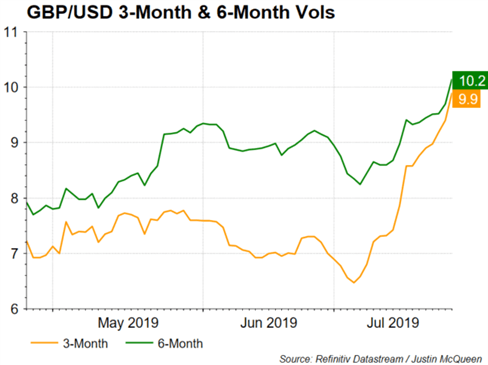 Also, in recent weeks, the GBP/USD 3-month tenor has continued to close the gap with the 6-month as markets begin to price in the risks of Brexit ahead of the October 31st deadline. In turn, this suggests that the Pound is expected to be increasingly volatile in the run up to the deadline, however, implied vols has still yet to reach the peaks seen in the run up to the prior deadline. As such, 3-month implied vols are expected to continue heading higher as the tenor covers the deadline.

GBPUSD Outlook: Volatility Begins to Awaken as Brexit Risks are Priced In