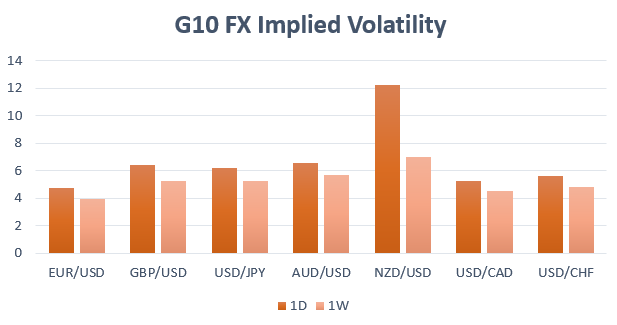 NZD Expected to be the Most Volatile Currency

NZDUSD | As we highlighted in the weekly volatility outlook, NZDUSD is expected to be the most volatile currency. Ahead of the NZ inflation report, overnight implied vols have jumped by 4.9 vols to 12.25, which is the highest since the June RBNZ rate decision. This implies that NZDUSD ATM break-evens = 34pips(meaning that option traders need to see a move of at least 34pips in either direction in order to realise gains). Interestingly, risk reversals have flipped to positive at 0.1 (albeit relatively neutral), showing that demand is rising for topside protection in the short run. 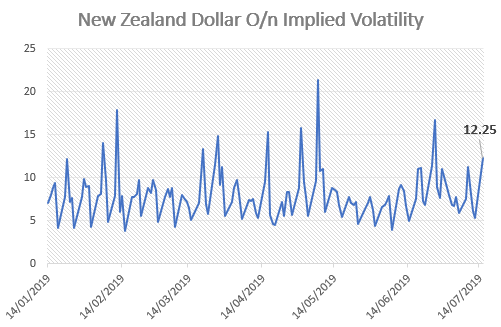 The NZ Q2 inflation report is scheduled for 23:45BST (18:45EST), where expectations are for a jump to 1.7% from 1.5%. The range for the headline rate is 1.6-2.1%, suggesting there is a risk of an upside surprise. As a reminder, the RBNZ’s preferred measure of inflation (Sectoral Factor) will be released later at 04:00BST (23:00EST), which will also be key to the near-term outlook for the central bank’s monetary policy. As it stands, money markets have attached a 73% likelihood of a 25bps cut to the OCR at the August 7th meeting. Therefore, an upward surprise towards the central bank’s 2% target could see an unwind of these bets, which in turn is likely to support the currency. However, a softer than expected reading is likely to confirm an additional rate cut from the RBNZ as they remain open to a lower OCR. 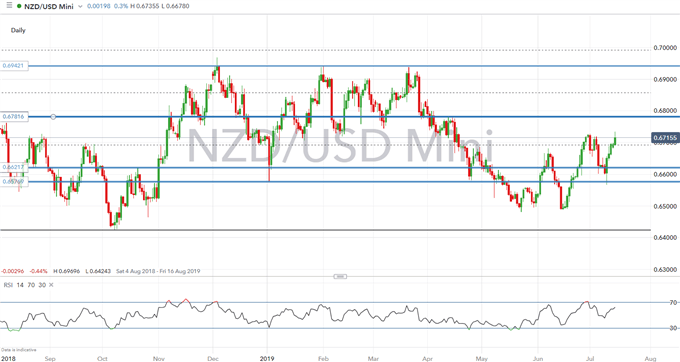