Much like equity market volatility, FX markets have also seen a significant drop in implied volatility. While part of this can be explained by the summer lull on the horizon, concerns over global growth that have been flagged up by the plummet in global bond yields, has failed to spill-over into the FX market and equity market. Alongside this, the global central bank U-turn in the monetary policy path has also contributed to subdued market volatility as hopes of further stimulus from the likes of the ECB and Federal Reserve has seen equity markets grind higher. 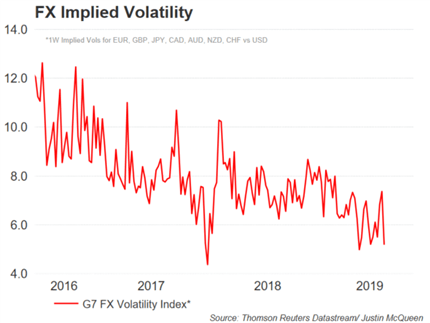 This has particularly been the case with the latter as money markets have fully priced in a 25bps rate cut at the end of the month with an outside chance of a 50% cut. However, as Fed’s Bullard stated last week, a 50bps rate cut may be somewhat overdone. Thus, the size of the NFP beat/miss will be critical in determining whether the Fed provides a 50bps cut or not and as such, this could have implications for FX markets, which seem to be under-pricing the risk that NFP poses.

Overnight implied volatility in major USD pairs has seen little additional risk premium with EURUSD vols 0.075vols to 7.275, suggesting a 34pip breakeven (meaning that investors would need to see at least a 34pip move above or below the strike to realise a profit), while USDJPY vols remain subdued. USDCAD has seen implied vols jump by 2.7 to 8.4vols with straddles at 46pips, given that the expiry also covers the Canadian jobs report.