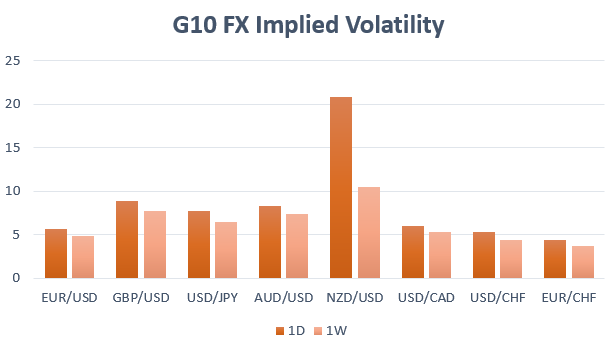 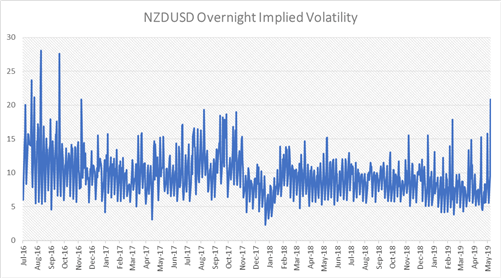 As highlighted in the weekly volatility report (full story) deteriorating data has fuelled expectations of a rate cut from the RBNZ, which in turn has kept the New Zealand Dollar under pressure. As it stands, overnight index swaps are pricing in a 40% chance of a 25bps cut at today’s meeting, as opposed to 60% on Friday with the RBA’s decision to stand pat seeing a pullback in rate cut bets. In light of the knife-edge rate decision, overnight implied volatility has jumped to the highest level since September 2016, whereby demand for NZD put options are highest since September 2018. However, the break-even for NZDUSD is only 58pips.

If indeed the RBNZ were to lower interest rates this would undoubtfully see the NZD initially under pressure. However, much like the RBA, a decision to stand pat on rates could see a short squeeze provide support for the currency, although with the rate decision expected to be accompanied with a dovish statement (opening room for a cut) an initial short squeeze bid could be subsequently faded. As a reminder, RBNZ Governor Orr highlighted on April 25th (after inflation data but before jobs data) that the NZ economy was “in a pretty good spot”, while the NZ Shadow Board had also reiterated no recommended changes, thus there is a risk of no change at the rate decision.